The Yorkshire Terrier is a wonderfully energetic toy dog that originated in Scotland and was later brought to England. These dogs are believed to have evolved from a combination of other Terrier breeds and are popular choices for anyone seeking small, loyal and loving canine companions. These dogs are often referred to affectionately as "Yorkies" rather than by the full breed name. If you're looking for a small dog with a feisty attitude and glamorous good looks, a Yorkie may be just the dog for you!

The Yorkshire Terrier is a fine boned little dog that weighs between three and five pounds, but not to exceed seven pounds. It is rectangular when viewed from the side, and the head is only slightly domed with a medium length muzzle. The upper and lower teeth meet in a scissors bite, which means the lower front teeth fit just behind the upper front teeth when the jaw is closed. The ears should be pricked, and the dog should seem very alert.

Tails are typically docked short in the USA when the puppies are no more than three days old. However, docking is considered barbaric in many countries where the practice is now outlawed or at least strongly frowned upon.

The breed's coat is its crowning glory; it's very long and silky when kept in proper condition. The American Kennel Club standard governing color on this breed is very specific and requires a dark steel blue on the main body and clear gold on the face, chest and legs. Puppies begin life colored black and a rich tan, but this coloring gradually lightens with age. The blue begins to grow in along the spine and eventually replaces all the black hair in adult dogs that attain the correct coloring, although some dogs retain the black and tan coloring well into old age. For showing, the hair on a Yorkie's head may be tied up in a single or double top knot. 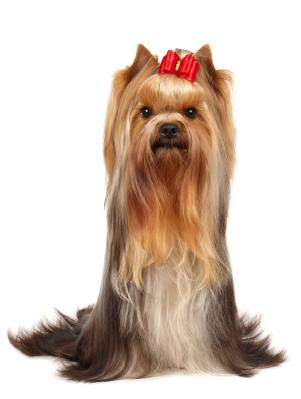 While these dogs are quite tiny, they don't seem to be aware of that fact. Yorkies have true Terrier temperaments and therefore have the heart of a lion. Yorkies are very adventurous. They will chase anything that resembles a rodent and are known to be prolific climbers to the point of scaling four-foot-high chain link fences. Although they look like elegant Toy dogs, they are true Terriers in every sense of the word.

To their human companions, Yorkshire Terriers are very affectionate and devoted, and they enjoy spending many hours snuggling or playing. However, their treatment of other dogs, whether of their own breed or another, can be a little aggressive. Yorkies are highly territorial, as many Terriers can be. They will scrap to defend anything they perceive as one of their possessions. This inclination varies in strength for each individual animal, but it's a mainstay of the breed's temperament. This territorial nature leads to more barking than some other breeds.

While Yorkshire Terriers make wonderful pets for adults and older children, their physical delicacy does not make them ideal companions for young children who may accidentally injure their pets.

Since Yorkshire Terriers are highly territorial, they have a strong instinct to mark their territory and tend to sprinkle around the house. Once this behavior begins, it is extremely difficult to curb. Great diligence is required for house training, and males are a little more difficult to train than females. It is a good idea to provide a spot for newspaper or Wee Wee Pads.

Yorkies are also very intelligent, and they can quickly learn to do anything they actually want to do. So, obedience training and agility training are both terrific options for owners and dogs to pursue. The sight of a Yorkie flying over a jump is truly amazing to behold.

Yorkies aren't necessarily hyper dogs, but like any Terrier, they do need enough exercise to burn off excess energy and avoid behavior problems. Toy dogs generally get a good deal of exercise just trotting around the house and playing, but it's also important for the to go on daily walks. In addition to the exercise this brings, going on walks also provides much needed mental stimulation that can help stave off boredom. A simple, daily walk around a block or two will help keep your Yorkie in good physical and mental shape, and you'll likely find you pet is better-behaved in your home as well. 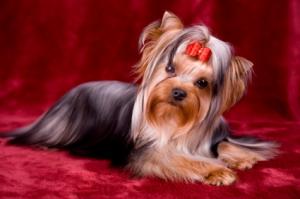 Yorkies require a good deal of grooming if you intend to keep them in long coat. Even though the coat is long, it does not carry the type of thick undercoat that a Shih Tzu has, so matting is minimal. A weekly bath and daily brushing will keep them in decent condition. It's important to keep the hair around the feet and anus trimmed.

The hair on the head should be tied up out of the dog's eyes with a small rubber band. A bow is not required, but it's part of the fun of owning one of these glamorous little canines. Yorkies can be kept in a shorter trim much like a puppy coat. This eliminates the need for a top knot. If you choose to keep your pet in long coat, simply part the hair down the middle of her back and brush it smooth. You'll occasionally need to trim around the bottom of the skirt to keep it neat because Yorkie hair never stops growing.

Keep the toe nails short, and remember to check nails on the dew claws if they haven't been removed. The coat tends to hide them, and they can grow around and into the Yorkie's pads if forgotten.

Yorkies also require a good deal of tooth care. Schedule regular cleanings as recommended by your vet, and brush your dog's teeth at least a couple of times a week to promote gum health. You should also provide your pet with chew bones to keep tartar buildup to a minimum.

Yorkies are generally robust little dogs, but some do have health challenges like many other purebred dogs. According to Joseph Hahn, Information Specialist for the University of Illinois College of Veterinary Medicine, there are several main health issues in this breed to be aware of. He covers three of the most concerning health issues in a report featured at Yorkie.org. These include:

Additional problems noted in the breed, genetic and otherwise, include:

Diligent breeders are working hard to identify dogs afflicted with serious health problems and refrain from using them in their breeding programs. Due to the tiny size of their lungs, Yorkies are also not terrific candidates for anesthesia and must be carefully monitored if surgery is required. 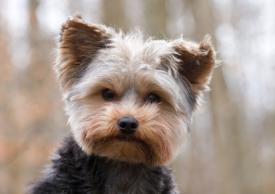 Despite the health problems common to this breed, Yorkies are fairly long-lived as long as they receive regular vet checks and proper vaccinations, good nutrition, moderate exercise and regular grooming. Most dogs live a minimum of 10 years, but many live an average of 12 to 15 years. A few well-cared for pets live even longer.

"Teacup" is a term applied to extremely small Yorkies that typically weigh around two pounds or less. These tiny dogs are quite delicate and tend to have shorter lives than standard size Yorkies due to their propensity for health problems and injuries. Subsequently, they often only live between five and eight years on average, but survive for even short periods than that.

According to the American Kennel Club history of the breed, the Yorkshire Terrier originated in the English town of Yorkshire. It's believed to be a descendent of the Waterside Terrier which shared some characteristics with Yorkies as we know them today. The Waterside was small in stature and had a long, blue-colored coat. Other breeds likely involved in the Yorkie's development include Manchester and Skye Terriers, and possibly a little Maltese thrown in as well.

Despite their regal looks, Yorkies had some very humble beginnings. They were developed as working dogs, and their primary duty was to catch rodents in cloth mills in order to keep the population down and save the cloth from being chewed and destroyed. These early specimens were a bit larger than the Toy dogs you see today. They were gradually bred down in size and became fashionable pets. It's at this stage when the breed really began to thrive and gain notoriety.

Known for a time as a Scotch Terrier, the Yorkie's name officially became the Yorkshire Terrier around 1870. The breed was eventually recognized in in 1885 by the American Kennel Club and has been allowed to compete in AKC licensed shows since 1878. They are also recognized by other kennel clubs across the globe, including: 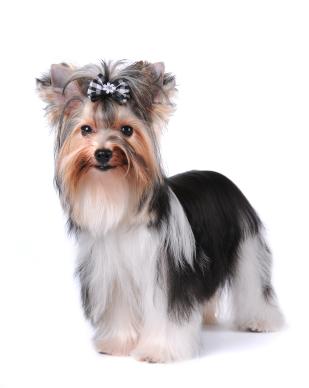 The Biewer: A Yorkie of a Different Color

In 1984, a piebald or "parti-color" Yorkie pup turned up in a litter bred by Gertrud and Werner Biewer of Germany. Due to the activation of a recessive gene, this puppy had white on its chest, legs and belly with typical Yorkie coloring elsewhere on the rest of the body. The breeders found this puppy quite attractive and decided to try to establish a line that would consistently produce the piebald type. They were successful and gave this line the name of "Biewer Yorkies."

Today, many breeders consider the Biewer a breed in its own right as long as there are at least three generations of pure Biewer breeding behind a litter. Although some breeders still crossbreed Biewers and Yorkshire Terriers, this practice is largely frowned upon since the color requirements for Yorkies are so specific.

Aside from the difference in coloring, Biewers are basically the same as Yorkies under their coats.

Certain dogs stand out in this breed's history. Here are a few of the most famous.

If you'd like to read more about Yorkies, the following books are good references.

Is a Yorkshire Terrier Right for You?

If the Yorkie seems like the right dog for your lifestyle, visit several reputable breeders or rescue shelters so you can get to know the breed better. Visit the Yorkshire Terrier Club of America for information about choosing a puppy and for referrals to reputable breeders. If you'd prefer to adopt a rescue dog rather than purchasing a puppy, visit YorkieRescue.com to learn how.