Whether you're considering adopting a dog or you're brushing up on your canine knowledge, you need to know about the different types of worms in dogs. It's a nasty subject, really. To think that your poor puppy's intestines can become infested with parasites may make you understandably queasy, but armed with the right information you'll be able to protect and fight for your pup's health.

Different Types of Worms in Dogs

Gnathostoma rarely affects dogs, but given the right circumstances, dogs can be susceptible with deadly results. Gnathostoma larvae develop within fish, and when fish are eaten by a larger animal, the larvae are released and burrow through the body of the host animal, returning to the stomach as mature worms that attach to the stomach lining of the host. If a nodule forms around the attachment site in the host, and that nodule breaks, stomach contents can leak into the host's body, causing infection and sometimes death. 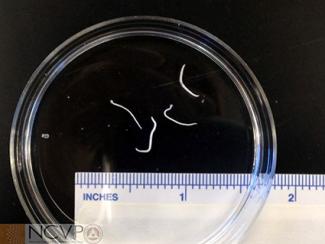 Hookworms live in the small intestine and feed off the blood of the host, quickly causing anemia and stunting the growth of puppies. As the disease progresses, your dog may experience vomiting and diarrhea, coughing, pneumonia or even death. 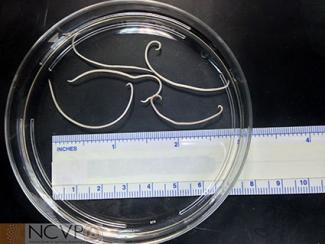 Roundworms are the most common parasitic infection present in dogs and puppies. Depending on the type of roundworm, they can infect dogs through the ingestion of an infected animal, through the ingestion of roundworm eggs, or by transmission from a mother to her puppies in utero or during nursing. Roundworms live in the host's intestine and feed off the nutrients in the host animal's food. Some infections will never progress to the point of detection, but other infections may cause coughing, weight loss, vomiting, diarrhea or constipation. In severe cases, roundworms can block the intestines of their host animal.

Similar in appearance to roundworms, physaloptera are transmitted to dogs through the ingestion of a beetle. If a dog eats a beetle, the larvae have the opportunity to mature within the dog's body. Physaloptera don't usually cause severe disease, but if infection occurs your dog may experience vomiting, diarrhea, loss of appetite and bleeding in the stomach.

Spirocerca lupi live in the esophagus and stomach of their host animal. When adult worms attach to the esophagus, they live in nodules that can grow and interfere with the host animal's ability to breath. In rare, but serious cases, the worms can develop within the heart's aorta. If this occurs, there is a chance that the aorta could dissect, or burst, and lead to the animal's near-instant death. Spirocerca lupi infestations in the esophagus can also develop into esophogeal cancer with the potential to transport cancer to other areas of the body.

This type of worm is generally seen in the southern United States and can be transported to a host animal through the ingestion of beetles or another infected animal, like chickens, rodents or frogs. 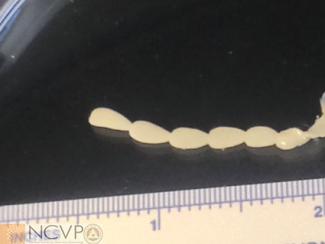 There are a number of different types of tapeworms that develop and infest in slightly different ways, but essentially, the worms live in the host's intestines, feeding off of the nutrients ingested by the host. Generally, tapeworms become present in the host's body through the ingestion of fleas, lice or another host animal. To help prevent tapeworm infections, use flea preventatives and don't allow your dog to eat common intermediate host animals like wild game, uncooked meat or fish. In most cases, tapeworm infections are asymptomatic, but if you notice nervousness, irritability, abdominal discomfort or weight loss, talk to your vet about possible infections.

Threadworms are small and thin and look like a strand of thread. Threadworm infections in adult dogs generally cause mild diarrhea and discomfort, but threadworms can be deadly in puppies. Parasitic larvae can enter a host by penetrating the host's skin or by entering a puppy's system through the mother during nursing. Symptoms in puppies who contract threadworms include diarrhea, weight loss, loss of appetite and severe dehydration.

Whipworms got their name from their whip-like shape. Dogs can become infected with whipworms by ingesting infected food or water, Mature whipworms burrow into the lining of the large intestine and feed off the host's blood. In mild infections, no symptoms arise, but in severe infections, the intestinal wall may become inflamed resulting in anemia, weight loss and diarrhea.

Heartworms are one of the most prevalent and severe parasites found in dogs. Heartworm microfilariae enter the dog through mosquitoes. Heartworms spend the first three months of infection coursing through the host's body before reaching the blood vessels of the lungs where they begin to mature. The growing heartworms inhibit the heart's pumping ability and can damage the blood vessels, leading to heart and lung disease. If worms mate in the host's body and create more microfilariae, the host's body will react, which can cause damage to other organs. Left untreated, heartworms can lead to death.

In most cases, vets will diagnose a worm infestation by testing your dog's fecal matter. Most worm infections are treatable, but vets often suggest a monthly worm preventative in order to stave off infestations in the first place.

In the diagnosis of heartworms, your vet will need to take an antibody or antigen test in order to detect the presence of heartworms. The treatment for heartworm infection can be long and arduous, and in some cases can still result in death. It is better to subscribe to a regular heartworm preventative than risk putting yourself and your dog through the stress of treatment.