If you own an unsterilized, or "whole" dog, it's important to be responsible about making sure he or she does not have access to other dogs of the opposite sex during mating season. If you feel there's a chance your dog may have had an accidental, unsupervised mating, there are a few signs you can look for that may confirm your suspicions.

Signs of Mating in Dogs

Determining whether a mating has occurred depends a lot on timing. There are a few signs you can look for that occur shortly after mating. If you return to your dog hours later though, you're unfortunately not likely to be able to tell if anything happened at all, at least not right away. Sometimes the only way to tell if your female dog has mated is if she begins to show signs she's pregnant.

One of the first signs that you may see immediately after a mating has occurred is a lot of moisture on the female dog. This is known as "wooing" because the male will lick the female prior to mating to entice her into the act. His saliva may also drip onto her during mating. You are most likely to see damp, matted hair on her head and facial area and along her back down to the tail. 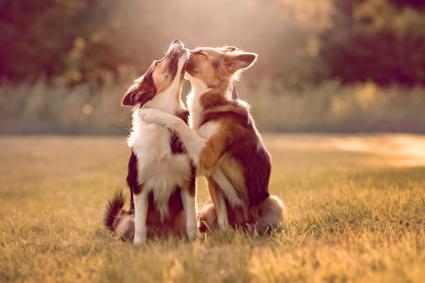 The Smell of Mating

Another tell tale sign is a very distinct smell from your bitch's rear quarter that is more noticeable than any odor related to her heat cycle. It may be strong enough to be noticeable in the immediate area or only when you get close to her.

Depending on how soon after the incident you arrive, you may notice that the male's penis is still aroused and erect and has not returned completely to its normal size. Another sign involving the genitalia is that both the male and female dog may lick theirs a lot more after mating in order to clean themselves.

Another sign your dogs may have mated is if you see either the male rolling on the ground on his back. Females may do this too but usually this is only seen with males. This behavior looks exactly like how a dog would roll in his back in the grass so it doesn't necessarily indicate mating happened but if you see it along with a few other signs, it becomes more compelling evidence the dogs were together.

Changes in the Female Dog

Female dogs after mating may become standoffish around the male. They may also seem lethargic and sleep more than usual. Another indicator found with the female is a noticeable change in how she walks which may possibly be due to discomfort from mating. This usually goes away shortly after but you should contact a veterinarian if she is still walking funny after a day. One change you most likely will not see is a cessation of bleeding after mating, as she may continue to bleed until her heat cycle is over.

Changes in the Male Dog

You may notice that your male dog has become much calmer, especially if he was very agitated around the female before. Dogs that are focused on a female in heat can be very hyper and will not leave the female alone and if this has suddenly changed, then mating most likely happened and ceased his urgent, pestering behavior.

The most obvious sign that your dogs mated is that your female becomes pregnant. If her heat cycle ends, her nipples begin to swell, and she shows less interest in food within the first week or two after the suspected mating, contact your veterinarian as there's a strong chance she is now pregnant. 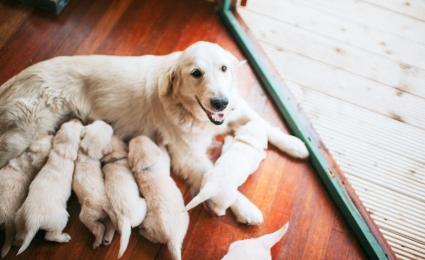 How Long Does Mating Between Dogs Take?

One of the reasons it is difficult to tell if your dogs have mated when you were not supervising is that the actual process doesn't take very long. When a male and female are in the act of mating, this is called the copulatory tie and the dogs are said to be "tied." Most ties average about 20 minutes though some can go as long as 40 minutes.

Can One Puppy Get Another Pregnant?

Dog owners who are new to breeding are often unaware of just how young dogs can be to mate successfully, no doubt because in their minds they're comparing a puppy to a human child. Technically a dog as young as five months old is able to sire a litter.

Does Dog Size Make a Difference in Mating?

Another common misconception is that dogs of vastly different sizes cannot mate and that a tie must occur for impregnation. While it obviously is much harder for a mating to take place between say, a Chihuahua and a German Shepherd Dog, it can still happen. The size difference doesn't matter as long as the bitch is willing to accommodate the dog, and fertilization is possible without an actual tie.

Is There a Discharge After Mating?

Other than the female continuing to bleed until her heat cycle is over, you should not notice any other type of discharge from the male or female. If the female becomes pregnant, you may see a clear discharge two to three weeks after the mating has occurred.

How to Tell If Your Dogs Have Mated

The best way to know if your dogs have had a successful mating is of course to be fully supervising them at all times. Male dogs will be determined to get to a female in heat so if you don't want your dogs to breed, boarding the male elsewhere until her heat cycle is over is the best way to prevent a mating. This also means supervising your female 100% so that other male dogs living nearby do not get access to her for any period of time.

98
Comments
© 2006-2021 LoveToKnow, Corp., except where otherwise noted. All Rights Reserved.
Signs a Dog Has Been Mating