Although most owners are careful to keep their pets confined when they are in heat, sometimes a breeding takes place - perhaps without the owner even realizing it. In other instances, the breeding is planned to produce a litter. It can be difficult to tell if your dog is pregnant during the first few weeks of gestation, but there are a few telltale indicators. Look for these five signs when you're wondering if your dog is pregnant.

A lack of appetite is one of the earliest signs your female might be pregnant. Not all females go through this doggy version of "morning sickness," but some dogs do eat less during the first two weeks of gestation and make up for it later in the pregnancy. If dogs experience nausea, it's usually during week three and four and will go away as the pregnancy progresses.

If your pet does lose her appetite during the early weeks of pregnancy or throws up occasionally, don't try to force her to eat. You can tempt her with some boiled ground beef and rice mixed with her kibble, but try not to worry too much if she still doesn't want food. Most dogs won't skip more than a day or two without eating something. If she refuses food three days in a row, then it's time to call your vet for some advice. 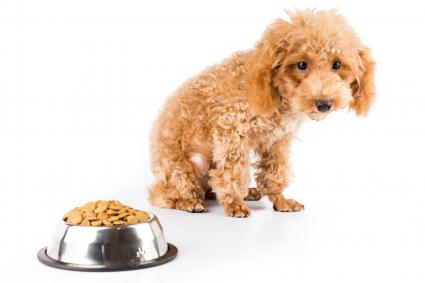 If your female is normally energetic, a sudden slowdown might be another indication she is pregnant. Just like some women, dogs may also experience feelings of exhaustion as their hormone levels change to support a growing embryo. This typically begins about two weeks into the pregnancy, and it may subside a few weeks later as she adjusts to her new condition. 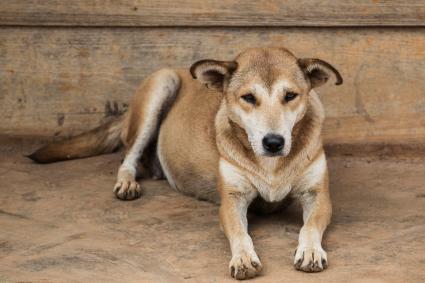 Breast development is a good indicator your dog's body is going through pregnancy changes. The nipples of an unbred female are usually small, and the area beneath them feels flat. Once a pregnancy is in progress, the milk glands begin to develop beneath the nipples, which also enlarge slightly in preparation for eventual milk production and nursing. You should be able to feel a bit of development about two weeks after a breeding has taken place.

In addition to breast development, the nipple color becomes more rosy, especially the last four to six nipples that are closest to the dog's hind legs. The nipples are usually a very light pinkish-gray, but they become flushed due to the increased blood flow to the area. This change takes place around the same time when breast development begins approximately two weeks after conception. 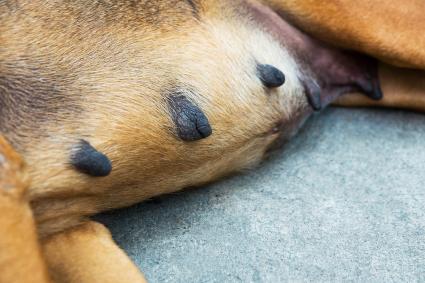 Nearly all newly pregnant dogs display some behavior change. Some females become extra affectionate and may even cling to their owners as they become unsure about all the changes they're feeling. Other dogs turn a little grumpy and prefer to remain by themselves unless they actively seek their owner's company. Behavioral changes often happen as early as a few days after a successful breeding. Towards the end of the pregnancy, starting around the sixth week through the birth period, your dog will start to display nesting behavior, which means she's getting ready to give birth to her puppies. She may also be more irritable in these final weeks and this is due to her being physically uncomfortable as she gets closer and closer to labor.

While vaginal discharge often occurs during a dog's pregnancy, it typically doesn't show until about four weeks gestation or even later, so it's not regarded as an early sign a dog is expecting a litter. You should consult your vet right away if you see discharge before mid-pregnancy, especially if it's:

Your female might have picked up an infection during her heat cycle or after mating.

Difference Between False and Real Pregnancy

It can be difficult to determine if your dog is pregnant or if she's just going through a false pregnancy. That's because, according to VCA Hospitals, the signs for both conditions are virtually the same. The main difference with a false pregnancy is you probably won't see them occur until at least four weeks after the heat cycle ends, and they may not even occur until nine weeks afterward. In a true pregnancy, you'll notice several signs within the first two weeks of gestation.

The Veterinary Exam and Beyond

While watching for symptoms of pregnancy at home can be beneficial, it's important to consult with a veterinarian. Whether a breeding was planned or unplanned, it's a good idea to take your dog to the vet for an initial pregnancy exam to make sure her symptoms aren't related to an illness rather than a pregnancy. If she is pregnant, she'll handle most of the pregnancy without assistance. Your primary job will be to: 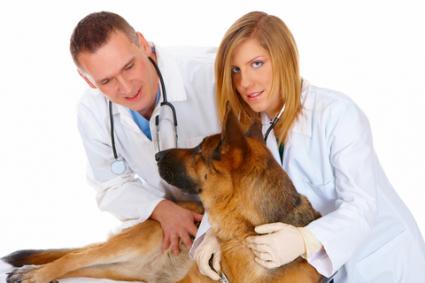 Testing a Dog for Pregnancy

Unlike with humans, there is no home pregnancy test you can buy at the local pet or drug store to see if your dog is pregnant. The blood test for dog pregnancy looks for a particular hormone called relaxin and most dog owners do not have the equipment to perform such a test.

This Is Just the Beginning

It takes a keen eye to spot pregnancy in the earliest stages, but the signs become more obvious as the weeks go on. Try to learn everything you can about canine gestation, other pregnancy symptoms, and the stages of pregnancy so you understand what's happening inside your dog's body. Use a dog pregnancy calendar to help estimate when your bitch can be expected to deliver puppies.