A mix of the Schnauzer and the Poodle, the Schnoodle is a popular designer mix bringing together some of the best attributes of both original breeds. The Schnoodle is known as an affectionate and playful companion for people of all ages.

Since the Schnoodle is a mix of two breeds, they can have more of the appearance of either parent breed. This leads to a variety of coat colors and fur textures when comparing Schnoodles to each other. In general, most Schnoodles have physical characteristics of both parents but the Schnauzer influence is often clearly dominant.

A Schnoodle's coat can be wavy and silky, straight and silky or made up of tightly curled fur.

The most common coat colors that Schnoodles come in are:

Some other colors you may find Schnoodles in include apricot, black with tan markings, parti-color, sable, tan and white. 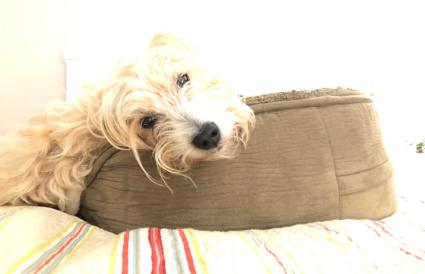 Schnoodles are one of several breeds of dogs referred to as "teddy bears." This name comes from the soft, curly fur, happy face and affectionate temperament that gives them the appearance of a teddy bear.

Schnoodles have a sturdy, athletic build that makes them a great choice for everything from jogging to hiking to performance sports like agility.

Schnoodles Come in Many Sizes

Schnoodles can be found in several sizes, although the majority of Schnoodles that are bred are on the smaller side.

A Toy Schnoodle is a cross between a Miniature Schnauzer and a Toy Poodle. These dogs are about 4 to 10 pounds total and about 10 to 14 inches high when fully grown.

The largest Schnoodle is created by breeding a Giant Schnauzer and a Standard Poodle. These dogs can be between 40 and 85 pounds and their height can range from 15 to 27-½ inches.

Schnoodles for the most part have even, gentle temperaments but their temperaments will vary somewhat based on how much they take from their Poodle or Schnauzer parent. Since you can't 100% predict a Schnoodle puppy's adult temperament, early and frequent socialization and training is a must with this breed. 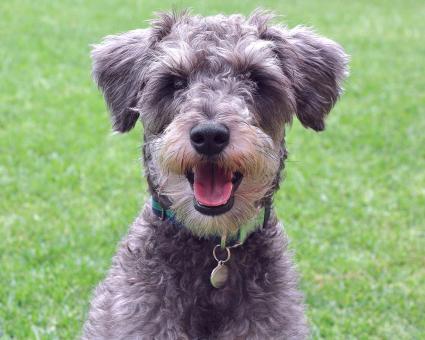 Schnoodles have a reputation for being very affectionate and loyal to their families. In fact they're described as "forever happy" dogs. They can be very playful and quite intelligent and enjoy interaction. There are some minor concerns about them as far as being good family dogs including:

Schnoodles have moderate exercise needs that can be handled with a good walk once or twice a day of a half to one full hour. They are active and energetic but not overly hyper and they can be calm, relaxed lap dogs with training and proper mental and physical enrichment.

Like their forebears, Schnoodles are intelligent dogs that enjoy training. Some Schnoodles have an unearned reputation for being strong willed. Just provide them with positive reinforcement and consistent training and you'll be surprised at how fun they are to work with. You can find Schnoodles excelling in performance dog sports and therapy dog work which attests to their smarts and trainability.

While no breed is truly 100% hypoallergenic, Schnoodles are known to produce fewer allergens than other breeds and are generally a good fit for people with allergies. They also tend to shed very little or not all which helps make living with a dog easier for an owner with allergies. 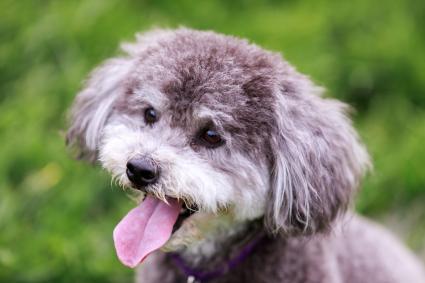 The breed has few health problems that you should be aware of although they tend to have fewer health problems than Schnauzers or Poodles. Speak to your veterinarian if you have any concerns about caring for these issues should they arise.

Skin problems are the most common health issue. Typical skin problems that can appear in the breed include:

The breed may inherit a Schnauzer parent's comedo syndrome. The condition causes papules or blackheads on the dog's back.

Toy and miniature dogs may be at risk for patellar luxation, which causes the kneecap to slip out of place due to slack knee ligaments. Some dogs with patellar luxation may require surgical intervention to correct it.

Some dogs inherit a Schnauzer parent's tendency towards high levels of fats or lipids in the blood, including elevated levels of cholesterol and triglycerides. This condition may require a dietary intervention and medication from your veterinarian.

Schnoodles on average live from 10 to 15 years. The larger the Schnoodle the shorter their lifespan. Expect a Giant Schnoodle to live about 10 to 13 years.

If you think a Schnoodle is the dog for you and your family, you can find one through a breeder or adopt one from a shelter.

One real concern about buying a Schnoodle is the high percentage of puppy mill breeders producing these dogs.

Cost of a Schnoodle Puppy

The price of a Schnoodle puppy will vary depending on the size of the dog you're looking for as well as the quality of the breeder. The average price is about $650 but you can find puppies for sale for as much as $4,000.

If you want to rescue a Schnoodle, there are several rescues groups that specialize in the breed. You can also find them through Petfinder and Adopt-a-Pet by searching for "Poodle" and "schnauzer." Many shelters will list these dogs as "Poodle mixes" or "Schnauzer mixes" so you'll want to search using those terms as well as "Schnoodle."

Schnoodles are wonderful dogs who are enjoyed by young and old alike. They are smart, funny dogs with an affectionate, cuddly personality. Of course like all dogs they have their undesirable quirks such as barking but with patient proactive training and socialization these issues can be handled positively.