The Rhodesian Ridgeback is not a breed commonly found in most homes, but it does have it's charms. If you think you might be interested in a dog that will do it's best to train you before you train him, read on.

As the name implies, the Rhodesian Ridgeback comes from a region in Africa formerly known as Rhodesia and now known as Zimbabwe. Although no one is sure about the breed's foundations, it's generally accepted that they descend from the native ridged Khoikhoi dog, with a bit of Mastiff, Greyhound, Bloodhound, and Great Dane bred in.

The breed was originally developed to track and harass lions into a state of confusion so the dogs' masters could hunt them. As you can imagine, Ridgebacks had to be extremely agile and fearsome to take on the king of the jungle long enough for their human companions to catch up.

Today, the Rhodesian Ridgeback is a family companion, frequently used in the sport of lure coursing right alongside Greyhounds and Whippets.

The Rhodesian Ridgeback is a fair-sized dog, built for athleticism. The breed's most distinguishing feature and the one for which it was named, is the fascinating ridge of hair along the spine that runs in the opposite direction from the rest of the coat.

Coats of this breed are short, sleek and very dense. This texture provides some protection against ticks, since the parasites can't easily latch onto the hair as the dog runs through brush.

Standard coat colors are shades of light to reddish wheat. A small amount of white markings on the chest and feet are acceptable.

By nature, Rhodesian Ridgebacks are hardy and can easily live to twelve years old, but the breed is susceptible to several health problems.

The temperament of the Rhodesian Ridgeback appears to be quite stoic upon first impression. These dogs are one of the most intelligent of all breeds, but this virtue is coupled with a highly stubborn nature. Although they can be calm, affectionate companions, these two defining traits make ownership a challenge.

A Ridgeback wants to think for himself, go where he wants to go, and do what he wants to do. This can lead him into quite a bit of mischief without proper supervision and training, and here lies our problem. Although these dogs are strong willed, they crumble under disapproval, so training must be undertaken with a delicate touch.

Since temperament and training are inseparable issues with this breed, all training must be carried out in a positive manner. If you're too harsh you'll crush your pet's spirit, turning him into a nervous wreck. These dogs absolutely cannot deal with physical punishment and verbal abuse, not that any animal should ever be treated that way.

A Rhodesian Ridgeback will respond best to fair, firm, and above all, consistent training techniques. You can never afford to make your dog toe the line one day, and the next day let him get away with something "just this once". That would be a recipe for disaster.

About Ridgebacks and Children

There are differing opinions whether these dogs make good companions for children. Their size and independent nature make them hard for children to control, either when going for a walk or having a good natured tussle.

Basically, Ridgebacks do not enjoy being pestered for any length of time and may bite if they feel sufficiently threatened. If they're not in the mood to play, they need to be left alone. This is easier for a child who has been raised around dogs and understands the body language of a dog that is saying "back off". A child who has just received his very first puppy will find it hard to understand why he can't continue to play with his new pet as long as he wants. Adults should plan to supervise playtime for the safety of all concerned.

Before You Buy a Rhodesian Ridgeback... 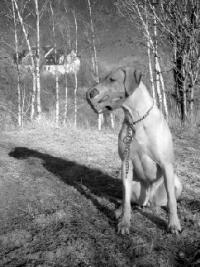 A Ridgeback wearing a field muzzle.

The decision whether or not to add a Ridgeback to your family requires a lot of consideration.

Ask yourself these questions:

If your answers to these questions don't dissuade your interest in these dogs, then you just might be able to handle this marvelous, but extremely challenging breed. The Rhodesian Ridgeback is definitely not a dog for a first time dog owner, but if you have solid experience working with canines, then perhaps you're ready to take one on.