Whether you've brought home a new purebred puppy or a mixed breed from a shelter, estimating the weight of a puppy when full grown can help you plan for the future. Tracking a puppy's weight and knowing where they should be week to week is also an excellent way of making sure they are thriving. If the puppy's weight is tracking below where they should be, this can alert you to bring them to a veterinarian to check for health problems affecting their growth.

A puppy weight table is a general guide to where your puppy's weight should be during the first few weeks and months of their life. You can use the weight chart as a puppy weight calculator by age for predicting a puppy's weight as they grow into an adult. If you have a mixed breed dog, estimating their final weight will be harder. You can use simple calculation by taking the puppy's weight at four months, doubling it and adding ten pounds to get an approximate idea of their final adult weight.

The chart below gives general information for small size breeds. This includes dogs like Boston Terriers, Dachshunds, and Shetland Sheepdogs.

The chart below gives general information for breeds that are medium in size. Examples of medium-size breeds include Border Collies, Corgis, and English Springer Spaniels.

Toy and small breeds reach their adult weight much faster than larger dogs. A toy or small dog can be fully grown at one year old whereas a giant breed can take up to three years.

How to Calculate Puppy Height

Calculating the height of your puppy is slightly more complicated than their adult weight. This is because many breeds will achieve their final adult height well before they've reached their final adult weight. For example, a puppy at 16 weeks can be about two-thirds of their adult height but only one-third of their final weight. This is why adolescent puppies regardless of breed can be tall and lanky until they "fill out" around the time they reach adulthood which can be from one to two years depending on breed.

While this is somewhat harder to do with a mixed breed, unless you have an idea of what breeds are in the mix, you can get a general idea of your puppy's final height based on their breed size grouping. 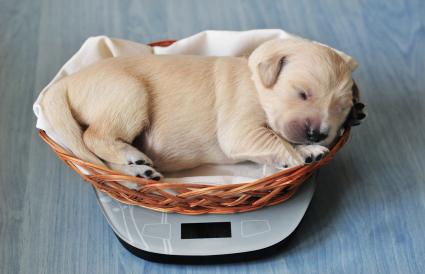 How Fast Does a Puppy Grow?

How quickly a puppy grows is based on their breed size as well as the stage of development the puppy is in. While the amount varies somewhat by breed, a puppy in general will double their weight after their first week and then gain between five and 10% of their weight each day during their size group's growth spurt period.

These percentages and milestones are a guide for the "average" puppy. There are additional factors that can come into play that can affect a puppy's normal growth or their growth rate compared to the "average" dog.

Breed issues aside, genetics still play a large role in puppy weight. While the standard rule is to examine the same sex parent for an idea of the puppy's eventual size, there are exceptions. Some puppies may inherit a "big girl" gene or a "tiny boy" gene from a parent. These genetic variables will result in a larger female dog and a smaller male dog.

Early nutrition can play a huge role in puppy weight despite the breed or genetic influences. Lack of sufficient nutrition in the early weeks of a puppy's life can seriously impact its growth and health, including its weight. Poor maternal milk or early weaning can also stunt a puppy's growth.

Spaying or neutering a puppy can affect their growth rate to a limited degree. This difference may be more pronounced for early spay/neuter which is common in shelters which can make determining the adult height and weight of an unknown mixed breed slightly harder.

The numbers provided in puppy weight charts are often based on either an average of male and female average weights, or on the average male dog weight alone. In many breeds, females can be noticeably smaller than males and this should be taken into account when estimating a female dog's future height and weight.

If a mixed breed's parentage is known, you can take an average for the estimated heights and weights for each parent's breed and use that to get an idea of the future adult weight. Realize though that genetics can create wide variations in dogs and when the two breeds vary widely in height and weight, a puppy can tend to favor the larger parent or the smaller one, or fall somewhere in the middle. If a puppy's parentage is unknown, DNA testing is available that can help you to pinpoint with some degree of accuracy your dog's heritage in order to estimate their future height and weight. 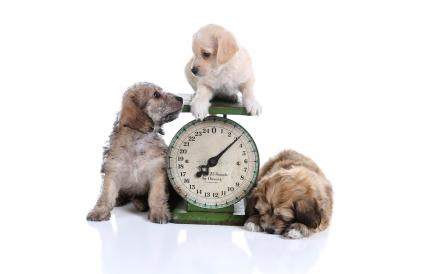 How Big Will My Puppy Get?

Everyone who brings home a new puppy, whether purebred or mixed, inevitably wants to know how large their new friend will be once they're fully grown. Following a puppy weight chart and understanding the typical growth patterns of a puppy can help you to estimate your dog's future height and weight. It's not an exact science but you can usually estimate within a few pounds and inches just how big he or she will be when puppyhood is finally over.