Meet the Pharaoh Hound, the living embodiment of the elegant dog found in Egyptian statues and heiroglyphics.

About the Pharaoh Hound

Although Pharaoh Hounds aren't as common as Labrador Retrievers, they are certainly one of the oldest of all dog breeds. These dogs can be found depicted on ancient Egyptian tombs dating back over 6,000 years. Remarkably, they haven't really changed in appearance from their early ancestors. This is largely due to the fact that this breed has been so highly regarded and protected by its caretakers. It's believed the breed was eventually transported out of Egypt to the Mediterranean where it has quietly flourished for the last 2,000 years. The breed eventually found its way to England and was brought to the USA from there. The first American litter was whelped in 1970, but the breed didn't receive official American Kennel Club recognition until 1983. The dogs became eligible for conformation competition in 1984.

These hounds are just as elegant as suggested in all that ancient statuary. They are a medium sized breed standing approximately 25 inches tall for dogs, and 24 inches high for bitches. Pharaohs are naturally lean, with long, clean lines and a slender tail that lends them a racy look. Indeed, these dogs are great runners. Their heads are quite distinct, with amber colored eyes and moderately large ears held erect. The keyword to describe a Pharaoh's expression is "alert." The coat of the Pharaoh Hound is short and closely fitted to the body without any rough or feathering. The fur is glossy to the eye and ranges in texture from fine to slightly harsh. It is also remarkably odor-free.

The coloring of these dogs ranges from rich tan through chestnut, with a white tail tip and chest marking. A small, defined amount of white is tolerated on the toes and face, but more than this is considered undesirable.

One of the most interesting facts about Pharaohs is that they actually have the ability to blush. This is demonstrated mainly through their flesh colored nose and inner ear leathers, and is chiefly observed at times when the dogs are highly excited.

Pharaoh Hounds make wonderful companions. These dogs are very intelligent as well as affectionate, and they love to interact with their human families. Their grace and elegance also lends them to athletic adventures. They make great coursing dogs and are also well suited to the agility ring. Pharaohs also have keen senses of sight and smell that make these dogs useful in the field as well. 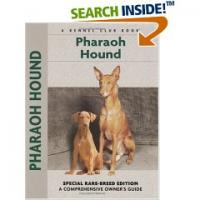 Pharaohs are capable of learning just about anything, whether it be basic house training, obedience, the aforementioned agility or anything else you care to teach them. That said, you must keep in mind that these dogs have been bred to think for themselves, so although they generally want to please us, they can become a bit stubborn when asked to perform a task they aren't comfortable with.

These dogs can also easily become bored. If you are able to communicate your needs consistently, your Pharaoh will do its best to oblige your request. However, be aware that a Pharaoh Hound does not appreciate heavy-handed training methods and is actually quite sensitive to negativity of any kind. Respect your dog's boundaries and limitations and the two of you will get along quite well together.

Since the Pharaoh Hound hasn't caught on with the average pet buying public, breeding has remain limited. This means that to date, the breed doesn't appear to suffer from any of the genetic disorders that plague other popular dog breeds. However, there are a few issues you should bear in mind.