If you ever have the opportunity to meet a Newfoundland dog in person, you will never be able to forget those soft brown eyes, that lovable expression, and the distinct feeling that a gentle giant is watching over you. These dogs can be wonderfully clownish companions when the mood calls for it, but don't underestimate them. They have a heroic streak that runs a mile wide and they are well known for their natural rescue instincts. If that means jumping into the water to save someone that fell in, so much the better! If you have room to keep a very big dog, one that displays a good deal of common sense as well as affection, the Newfoundland might just be your ideal companion.

According to the American Kennel Club breed standard: 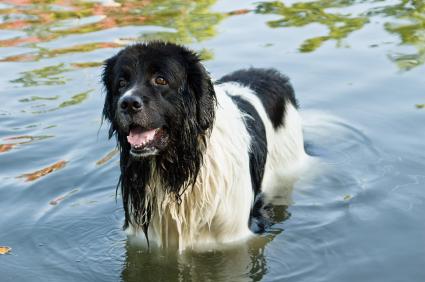 Newfoundlands are usually black or chocolate brown, but gray/blue varieties do exist, although they are very rare. There is also a black and white color combination referred to as Landseer. The base coat is white, and the head and saddle are black. There is also some black on the croup, which is the rump area in front of the base of the tail. There may also be some white on the muzzle and a blaze of white between the eyes, but not always.

Most kennel clubs consider the black-and-white Landseer to be a color variety of the Newfoundland. However, the Fédération Cynologique Internationale (FCI), or in English, the World Canine Organization, considers the Landseer a separate breed. Regardless whether this is a different breed or simply a color variety of the Newfoundland, Landseers are generally less massive than Newfies and stand a little taller. They are said to drool less than their darker counterparts.

Newfoundlands are known and loved for their gentle dispositions and their sweet, affectionate natures. What is simply amazing about this breed is that despite their enormous size, these dogs are extremely docile with creatures big and small. This makes them ideal family dogs. They are loyal companions to adults, kind playmates to children, and have a low tendency toward barking. Patience is another hallmark of this breed, and many people describe the Newfoundland as the perfect pet.

Newfies may be gentle, but they also have a courageous side when the situation calls for it. They are usually friendly to everyone they meet, but they can be quite protective of their families if they sense a threat to their safety.

These dogs also have a great love for the outdoors and especially the water. Their feet are webbed for a reason - they love to swim! In fact, these dogs have a strong instinct for water rescue.

Newfies move with an effortless, rhythmic gait. Their reach in the front and drive in the rear allows them to cover a lot of distance with a minimum of steps. Their legs usually move parallel, but they tend to single track when they move at greater speeds. Their skin naturally rolls back and forth a bit as they trot along. 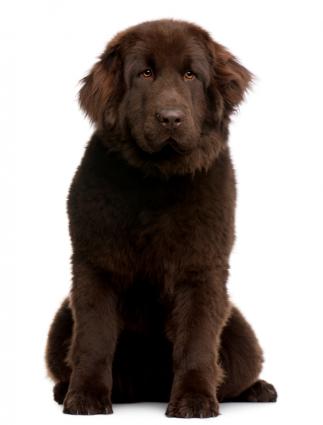 Practically all dogs shed. Newfoundlands just tend to shed a little more than some other dogs. That's because they have a lot of thick undercoat. During the spring and fall, Newfies shed this undercoat, a process referred to as "blowing coat." Extra grooming may be required during these times.

No doubt about it, a Newfoundland is a big dog, and simply being that big takes a lot of energy. So, the fact that they love to lounge around the house is no surprise. That is why so many people who live in apartments argue that even though Newfies are huge, they can adapt happily to apartment life. However, that does not mean that Newfies do not need exercise, and if the activity has to do with water, the Newfie will love it all the more! These dogs are natural swimmers.

Even though these dogs love to relax, they should still go on daily walks to help keep them in good condition. About a 20-minutes walk per day should be sufficient, and then they should also have time to roam at will in the yard. Of course, they would also love a daily swim as long as you have a safe body of water for them to swim in.

Along with their gentle ways, Newfies are also quite sensitive. So, training sessions must be calm and focused. Never raise your voice or scold your dog during these sessions or you won't get very far. These dogs respond well to positive reinforcement since they love to please their people, but you do need to establish yourself as the pack leader so they'll follow your lead.

In addition to training Newfs for drafting and water sports, they can also be trained as excellent search and rescue dogs or as therapy dogs. 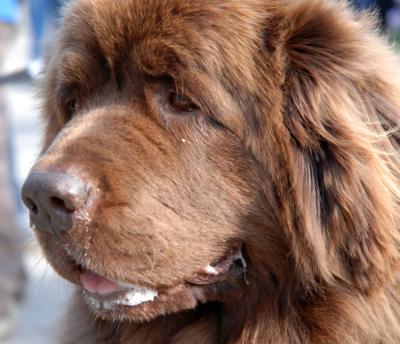 The Newfoundland Club of America has put in great effort to identify and compile a comprehensive list of genetic disorders that affect this breed. From that list, here are the conditions the club strongly recommend all dogs be checked for before being used in a breeding program.

These dogs are also prone to bloat, and they do not do well in the heat. A comfortable Newf is a happy Newf, so you may need to crank up the air conditioner on those really hot days.

It's difficult to predict the lifespan of any breed, but giant dog breeds tend to live shorter lives than smaller dogs. These dogs live an average of eight to ten years.

According to the history of the breed as recorded by the American Kennel Club, no one is exactly sure which breeds served as the foundation for the Newfoundland. There's speculation that the Great Pyrenees might have contributed some genetics to the Newfie, and there is indeed some similarity in appearance between these two giant breeds to lend that theory some credence. The one thing most breed experts agree on is that the Newf is most likely a descendent of dogs brought to the island of Newfoundland by European fisherman.

The breed developed as a working dog that was well-equipped to work on the land as well as in the water (as evidenced by those webbed feet). They could pull heavy carts or carry packs as easily as they helped fishermen drag in their nets and literally retrieve anything that wound up overboard. Along with these qualities, the Newfie also developed a rather heroic aptitude for water rescue, and these dogs have long been used to pull both children and adults out of the water to safety. 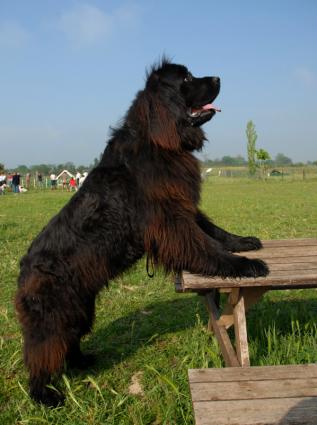 In addition to the American Kennel Club, Newfs are recognized as an official breed by many clubs around the world, including:

If you enjoy breed trivia, here are a few famous, or at least historical, Newfs.

Here are a few of the most prominent Newfie clubs around the world. One of these clubs may be able to help you find an affiliate near your own region.

If you're truly interested in this breed and you're considering bringing one into your home, it's a good idea to read everything you can about them. Here are a few books that can help you learn more. 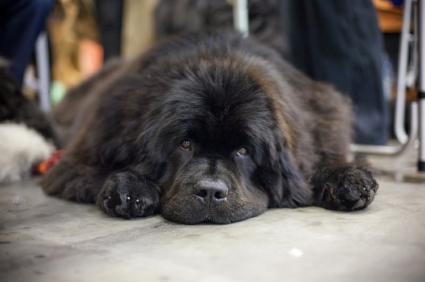 Purebred puppies from a breeder prices can run from $800 upwards to $2,000 per dog. However, a rescue is an affordable option. No Newfie should ever go without a loving family of its own. Here are several rescue shelters that work to rehome dogs in need.

Is a Newfoundland the Right Breed for You?

The Newfoundland is an outstanding family dog if you have room enough to keep one. This dog's sweet disposition, reliable nature and keen intelligence have been highly-prized for hundreds of years. The breed is disposed to a number of inherited conditions, so it's important to learn as much about an individual dog's breeding line as you can in order to understand which problem(s) you may have to face in the future. Also make sure that any dog you're interested in has been vet checked and health screened. To find reputable breeders you can visit in order to meet these dogs in person, check the Newfoundland Club of America's breeder referral page.