Mouth tumors can cause obstructions that make it difficult for pets to chew and swallow. Surgical reduction of growths is often necessary for a pet's survival, but it isn't always possible depending on the tumor's type and location. Learn more about these tumors and how they're treated.

The good news is that every tumor doesn't automatically blossom into full-blown mouth cancer. According to the Pet Cancer Center, tumors can be divided into two main categories.

Benign tumors are noncancerous growths that, in general, are easily removed by surgical means. These growths are usually well defined at the edges without the type of invasive growth into bones and other tissues that are typically seen with malignant tumors. Benign tumors also don't spread to other parts of the body.

The most common type of benign tumor found in dogs is an epulis. These tumors can be found growing on the periodontal ligament.

Malignant tumors are cancerous and are usually quite invasive to the area surrounding them. This makes surgical removal difficult if not impossible. Malignancies also tend to metastasize or "spread" by shedding cells that migrate through the bloodstream to take hold and grow in other areas of the body. Common malignancies include:

Although it isn't yet possible to determine exactly what spurs the growth of cancerous cells or tumors in a dog's mouth, there are a few theories. 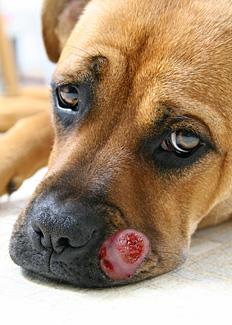 Carcinogens may actually be inhaled by dogs as they sniff the ground and, generally, everything else around them. Cancer-causing agents then have the opportunity to take hold and affect surrounding cells, causing the abnormal cell growth that results in cancer.

Dogs may actually consume carcinogens. A research study found a possible link between some commercial dog foods and canine mouth cancer. Some brands actually include chemical preservatives and pesticides in their formulas that may also be carcinogenic, but further study will be required to confirm these early results.

Early detection is the key to increasing the success rate in the treatment of all mouth cancer in dogs. Sometimes it is already too late to help a pet who is only just beginning to show symptoms of being sick, so it pays to be diligent.

Symptoms of Oral Cancer in Dogs

Owners should regularly check their pet's mouth for the following signs:

In order to make a diagnosis, your veterinarian will do a biopsy of the tumor, as well as perform other tests including blood work and X-rays, CT scans or ultrasounds. The cost of a biopsy will vary depending on whether your veterinarian can easily do a fine needle aspiration or if surgery is required to get at the tumor to obtain a sample. You can expect to pay from $400 to $1,000 or more for the biopsy

There are four stages of oral cancer that is based on guidelines from the World Health Organization.

According to the Pet Cancer Center, treatments for the different types of mouth tumors vary. However, the most effective mouth cancer treatments for dogs include:

More aggressive treatments may be supported by holistic therapies including giving herbal, mineral and vitamin supplements. Treatment can be expensive with the cost of removing one tumor running from $1,000 to $2,000, plus additional care costs including blood tests, x-rays, medications, and more.

ONCEPT® Melanoma is a vaccine developed by Merial to help increase the life expectancy of dogs during stage II or stage III oral cancer. Unlike a vaccine given to prevent a disease from occurring, ONCEPT is given to dogs diagnosed with oral cancer in order to bolster their body's immunity to cancer cells. Merial's research has found that the vaccine can extend a dog's life up to one to two years if the dog receives either surgery or radiation treatment as well. ONCEPT can only be obtained from a veterinary oncologist, and the cost will vary based on your veterinarian's schedule of fees although you can expect the cost to be in the range of $2,800.

The life expectancy of a dog with oral malignant melanoma largely depends on when it is discovered and treated.

Dogs with oral squamous cell carcinoma have a very short life expectancy if the tumors are located in the tonsils.

Are Other Pets at Risk?

If you have other pets in the home, there is no need to worry about the risk of contagion. Cancerous tumors are not infectious and cannot be passed from one to pet to another, or to any humans in the household.

Checking Your Dog's Mouth Could Save His Life

It can be devastating for an owner to learn that her pet has cancer, but routine checks of your dog's mouth will help you find any abnormalities as soon as is humanly possible. This just might increase your pet's chances for survival.