Labradoodles first came to public attention around 1988. With celebrity owners like Tiger Woods drawing even more attention to this crossbreed, they are sure to continue growing in popularity.

The Foundation of Labradoodles

Labradoodles are just one of a number of cross-bred dog types that fall under the recently coined category of "designer dogs." These good-natured pets are the result of breedings between Labrador Retrievers and Standard Poodles.

There is a bit of debate about who bred the first Labradoodle and gave this designer breed its name. It's highly possible that the occasional Poodle could have bred with a Labrador Retriever at any point in these two breeds' histories and produced crossbred pups. In fact, there's mention of a "Labradoodle" in Sir Donald Campbell's book, Into the Water Barrier which was published in 1955, so it seems the name had been used before.

According to the Australian Labradoodle Association, however, the Labradoodle as we know it today traces its beginnings to Australia, where Wally Conron of Royal Guide Dogs carried out the first deliberate cross-breedings in an effort to create a hypo-allergenic dog breed that could be used as service dogs.

Conron had allergy testing performed on saliva and dander samples from all resulting offspring of these first matings and pursued his breeding program using only dogs that were proven to have less allergenic tendencies. Within a few generations, he had established a line of dogs that, although not purely hypo-allergenic, still caused far fewer reactions in dog allergy sufferers.

Breeders Jump on the Bandwagon

Of course, once this breeding program became public knowledge, many individuals hoping to cash in on the hypo-allergic bandwagon began indiscriminately breeding Poodles and Labs together calling the resulting pups "Labradoodles." As a result of this market flood, most Labradoodles today are not likely to be truly hypo-allergenic.

There are some differences in the appearance of individual Labradoodles. Some look quite a bit like their Poodle ancestors, while others more closely resemble shaggy Labs. The look of the breed will become more uniform as Labradoodles are bred to each other rather than simply crossed from Poodles and Labs.

"Doodles," as they are affectionately called by their fans, are available in a range of sizes. 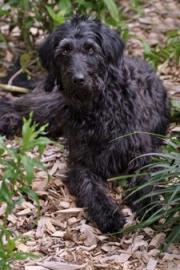 Currently, there are two main coat types for Doodles.

Coat colors range in all the standard Poodle and Lab shades including:

Although the hypo-allergenic quality of these dogs remains questionable, there is no room for doubt about their wonderful personalities. The ideal Labradoodle is a highly social creature, affectionate and loyal by nature, and very tuned in to its human companions. It also tends to get along well with other canine companions, being less territorial than some breeds.

Doodle training has also proven to be a success. These dogs easily learn what is required of them for daily family life. Plus, they have also made their mark in the service dog arena becoming guide dogs for the blind and terrific therapy dogs.

It's difficult to predict what the future may hold for this aspiring dog breed. Will quick cash breeding give way to a renewed effort to establish a truly hypo-allergenic pet or will Labradoodles turn out to be a canine fad? The answers to these questions remain in the hands of Labradoodle breeders everywhere.