There are a variety of Japanese dog breeds. Some may already be familiar to you, while you may not have heard of the others. You'll even find a few impostors that are not true Japanese breeds.

The Shiba Inu is the most popular dog in Japan and is gaining popularity in the western world as well. The Shiba is the smallest of the original Japanese breeds, and it makes a good, yet sometimes stubborn, family companion despite the fact that it was originally bred to hunt small game.

An excellent watchdog, the Hokkaido Inu is sharply intelligent and thinks quite independently. However, these dogs are very devoted to their human companions. They are considered perhaps the oldest of the Japanese dog breeds, and they have been bred to withstand very cold winter weather.

The Shikoku was declared a national treasure in Japan, and its bloodline is considered extremely pure. This is because the island where these dogs developed, Shikoku, was quite isolated, and interbreeding with other dogs is strictly forbidden.

This is a very rare breed that originates from the Japanese island of Okinawa. They were originally bred for hunting wild boar. The breed is considered a National Treasure and is a protected breed due to their dwindling numbers. It is known as Turra-in by local Okinawans because of their tiger-like stripes.

Japan has several medium to large size dog breeds that are all known for being fiercely intelligent, loyal and independent.

This is the original Akita bred in Japan. It is similar to the American Akita, but it is not as muscular. It also has a slightly longer muzzle, and its head is not as broad as the American version. These dogs come in white, shades of red and brindle.

This is another Spitz-type dog from the mountains of Kishu that was originally bred to hunt boars. Today's Kishu comes in solid colors, and white dogs are the most common. Like many Japanese breeds, the Kishu is a very quiet dog, and it makes a nice, medium-sized family companion.

Also known as the Kai Inu, the Kai Ken breed is another Spitz-type dog, but it is rangier than the other Japanese breeds. The most distinguishing feature of this dog is its brindle coat. The Kai Ken is often referred to as the Tiger Dog.

The Tosa is the result of interbreeding the Shikoku with a variety of powerful dogs including Mastiffs and Great Danes. This created a Mastiff-type dog with a powerful build that does not bear any resemblance to the Spitz-type build of the other purebred Japanese dogs. The Tosa was bred for fighting.

The Karafuto dog originated on Sakhalin island and is also known outside of Japan as the Sakhalin Husky or the Sakhalin Laika. Sadly this dog is almost extinct. These dogs were bred for sledding and living and working in a cold, snowy climate. They were a much-loved breed in Japan and a monument to their bravery and strength can be found. It commemorates the events in 1958 at a Japanese research station in Antartica that was adapted by Walt Disney in the movie Eight Below. 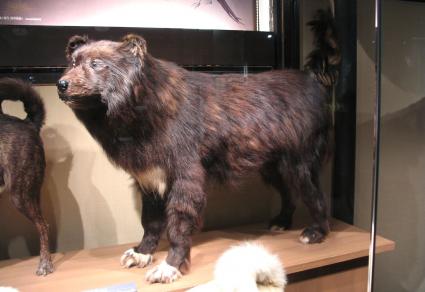 The Sanshu Inu is a relatively new breed in Japan that developed through a breeding of Chow Chows and several types of Japanese dogs. They are known as loving dogs that excel as protective family dogs. Like most inus, they have a similar look and can be distinguished by their straight tail.

The following breeds are not native to Japan despite their names. They are simply breeds taken to heart by the Japanese people and further developed in that country.

Despite its name, the Japanese Chin did not originate in Japan. The Chin comes from China, but it became a great favorite of Japanese royalty and was further developed in that country. Once known as the Japanese Spaniel, the name was changed to Chin after receiving recognition from the American Kennel Club.

It's generally believed that the Japanese Spitz is the result of down-sizing the Samoyed. These bold little dogs have a beautiful milk-white coat that requires a lot of brushing.

The Japanese Terrier is most likely a descendant of Smooth Fox Terriers originally brought to Japan by traders from other countries. These dogs are small and somewhat territorial, but they do make lively family companions.

Although a descendant of the original Akita Inu, the American-style Akita's build is noticeably stockier. This led to its recognition in the American Kennel Club as a separate breed. The American Akita can have virtually any color and markings.

There's no doubt that the Japanese people have a great love for their canine companions. If a Japanese dog breed has caught your interest, contact a breeder and schedule a visit to get to know one of these dogs better. Of course, you may have to visit Japan to see some rarer breeds in person but it will definitely be an adventure!