How can you be sure your dog's pregnancy is progressing normally? If it's been at least six weeks since your dog became pregnant and you're not seeing any normal signs, you may be wondering if your dog is still pregnant and what steps to take next.

Signs a Dog Is Still Pregnant

It can be stressful caring for a pregnant dog, especially if you're a first-time breeder. While it's possible to have a dog in her sixth or seventh week of pregnancy showing few signs she's carrying a litter, it's not likely. It may be the case that she is showing signs that you're just not aware of due to lack of experience with the pregnancy process. Every dog is different as well so some may show more or less signs during their pregnancy period.

When to Expect Signs of Pregnancy

According to Dr. Turnera Croom, "the average gestation time is approximately 63 days, and by 46 or more days, the dam should definitely be starting to show some signs." Some of these signs can include "hair loss on the belly and enlarged mammary glands." Your veterinarian will use x-ray or ultrasound technology to observe the bitch's uterus. This is important to "get an accurate puppy count and ensure that all the pups have been expelled," once she is in the birthing process. It's normal for dog owners to become anxious though. Dr. Croom relates that, "we have one Rottweiler breeder client who is always nervous around whelping time and I usually get a frantic call asking if the pups should be here by now!"

As your dog progresses through the gestation period, you should see different signs at each stage in the process. Some of the common signs along the way are:

What Does a Shrinking Belly Mean?

If a dam is well along in the stages of her pregnancy with at least 45 days or more in, a belly that appears to be getting smaller is a sign for concern. Dr. Croom explains that a belly that seems to be suddenly getting smaller "could indicate that her body has begun the process of resorption of the fetuses." This could be caused by a number of factors that are "viral, bacterial and genetic." Dr. Croom also notes that a shrinking belly this late in the pregnancy could mean that the dam "was not actually pregnant at all and was experiencing a pseudopregnancy the whole time." A psuedopregnancy, or false pregnancy, "is caused by hormonal imbalances that can cause mammary milk letdown, abdominal distension, and nesting behaviors in females with no puppies inside them." 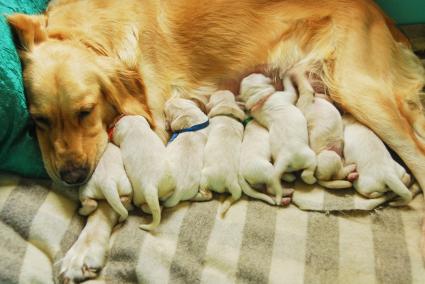 When It's Time to See a Veterinarian

While it's normal to feel anxious when your dog is getting toward the end of her pregnancy, there are definite signs that indicate you should seek medical attention for her right away. Dr. Croom advises dog owners to seek veterinary care for the pregnant bitch immediately if you see:

If the dam has already begun to give birth, Dr. Croom advises you to get help from a veterinarian as soon as possible if "one or more pups have been born, followed by a long pause of over two hours" with no other pups appearing.

Work With Your Veterinarian

In Dr. Croom's experience, breeders who are familiar with the process are usually capable of caring for their dog and the newborn pups. They tend to have "most of the equipment and knowhow for a whelping session" and they know when to contact their veterinarian in unusual situations like "a blocked pup or no active labor at the expected time." For newer breeders, as well as experienced ones, she recommends working with a veterinarian who offer "telemedicine in the form of a video vet appointment" which allows veterinarians like herself to "visually see the birthing mom over video and guide the owner with next steps." This can be much less stressful for the birthing mom than having to go into a clinic and gives the owners peace of mind having a medical professional walk them through the process.