The French Mastiff dog may look like a menacing mass of wrinkles and drooling jowls, but there's far more to this dog than meets the eye. In fact, owners describe these dogs as real sweethearts. That doesn't mean they're pushovers, though. French Mastiffs are extremely loyal to their people, and they'll do their best to protect them from danger. Even so, the hallmark of this breed is their calm and dependable nature. That's definitely a quality you want in such a powerful canine.

The French Mastiff, also known as the Dogue de Bordeaux, looks quite intimidating, and he really can be if circumstances call for it. These dogs have a rectangular appearance with deep chests that extend down half of their height. They have fairly thick tails that taper to a point and stretch down to the back of their hocks. Their build is stocky and powerful and their skin is thick, loose and folded in wrinkles, most notably around the face, head and neck areas.

These dogs are known for their large size. 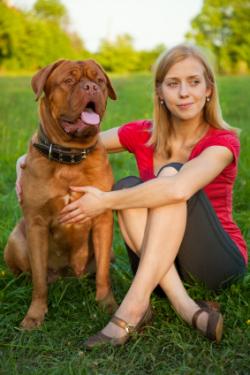 This breed's head is the most impressive part of the package. The ideal head is massive and equipped with a broad nose and strong jaws. The muzzle is approximately one third the length of the head, and there is a definite stop where it meets the dog's forehead. The bite is undershot, which means the lower teeth are set in front of the upper teeth when the jaw is closed. Loose jowls drape down from the muzzle and cause these dogs to drool. The eyes are oval-shaped and wide-set. Their skin is fairly loose and quite thick with significant wrinkles on the head, face and neck. The ears are relatively short and hang downward.

The French Mastiff's coat is short and surprisingly soft for such a large dog, and it ranges in color from light fawn to red fawn. These dogs may carry either a black or brown mask or sometimes no mask at all, but the mask should be limited to the muzzle and eye areas and not spread up into the head. The color of the nose should match the mask.

This dog typically gaits at a trot with very free movement, although he is capable of great speed in short bursts. His head tends to stretch down and forward the faster he goes. His front legs should move parallel to one another, as should the rear legs, but both tend to converge towards his center at higher speeds. When standing still, the rear legs should not bend in toward each other at the hocks.

Since the French Mastiff is such a large and powerful animal, it is imperative that his temperament is steady and dependable. According to the American Kennel Club standard, the ideal specimen is very calm and not easily roused to excitement. The dog should display devoted affection toward his owner and behave as a good companion to the entire family. Even though this dog is a natural guard dog, the Mastiff's character should be vigilant, not aggressive. 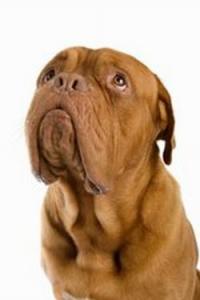 A French Mastiff puppy needs socialization and early training to nurture the desired temperament. The old saying "start out as you mean to go" definitely applies here. Be consistent in your rules. Do not allow your pup on the furniture now and expect him to stay off it when full grown. Likewise, do not tolerate play biting that could lead to something more dangerous when his massive jaws are fully grown. Remember, what you raise is what you get.

It's true that these dogs do not always appreciate sharing their home with other pets, especially other dogs, so socialization must take place while they are still young and more manageable. It should also be noted that adult males find it especially difficult to tolerate each other.

Obedience training is also imperative for establishing the proper relationship between dog and owner. If you do not take your place as your Mastiff's leader, the dog will soon be leading you.

Well-socialized and obedience trained French Mastiffs are suitable for training in search and rescue work as well as therapy dogs.

This Mastiff is actually quite agile for its size, and he can get by on a moderate amount of exercise. A good daily walk is sufficient to meet his needs, so he can actually do well in a home with a small yard. That said, these dogs do enjoy physical activity and are quite willing to pull weights and participate in obedience competitions. When you're considering exercise, don't forget this dog's mind as well as his body. Physical exercise helps burn off stress as well as extra calories, and a change of scenery provides much needed mental stimulation that will help keep this dog from becoming bored and displaying destructive behaviors. 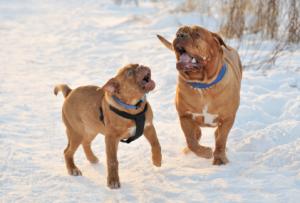 Due to the fact that the wrinkles on the face and neck can collect moisture, it's important to bathe these dogs approximately every two weeks to avoid developing odors. The facial wrinkles and eyes should be wiped down daily to keep them free of bacteria and accumulated debris. Shedding is only moderate with this breed, so a good brushing a couple times a week will keep loose hairs to a minimum. The folded ears should also be swabbed out twice a month, and nails must be kept trimmed to help the dog walk on his feet properly and avoid joint damage from carrying so much weight.

It's beneficial to establish these grooming routines while the dog is still a puppy, before he reaches his full size and strength. 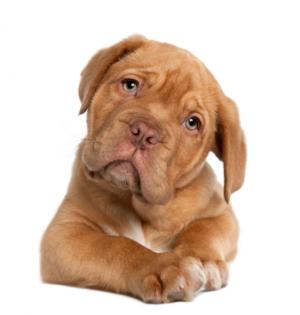 The French Mastiff faces many of the same health challenges as other large breeds including:

Large breeds often don't live as long as smaller breeds due to the strain their bulk puts on their internal organs. However, the French Mastiff has a relatively long lifespan considering his size and the health problems noted in the breed. The average lifespan is eight to ten years, but some dogs live even longer. Of course, feeding this dog high-quality food, making sure he gets regular exercise and providing routine veterinary care will go a long way toward extending his life.

A Little History on the French Mastiff

This breed has an interesting history. 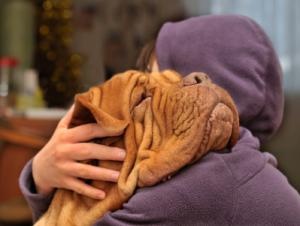 No one is completely sure about the origins of this breed, but theories abound. Some believe the French Mastiff descended from European Mastiff breeds that were possibly crossbred with other large working dogs. Others believe these dogs are more likely the descendants of Greco-Roman dogs of war. There's speculation that the Tibetan Mastiff also played a significant role in the breed's foundation. The only thing that is certain is that these dogs definitely belong in the Mastiff family.

According to the AKC's history on this breed, early French Mastiffs/Bordeaux looked a bit different from the breed today. They came in colors other than shades of fawn, including brindle. While markings are considered undesirable today and must be limited to a small patch on the chest and a touch on the feet, early Bordeaux often had more extensive white markings. Their jaws were not uniform either, and some dogs actually had scissors bites where the top teeth rest in front of the bottom teeth when the jaws are closed. Today, these dogs are expected to have undershot bites. There was also some disparity in head size, with some lines having much smaller heads than others. Breeding for a single type has lead to the breed's modern, more uniform appearance.

In the past, there were three different "types."

Brought Back from the Edge of Extinction

Once the preferred guard dog of shop keepers and the elite, this Mastiff faced a dire threat of extinction during the French Revolution and again during WWI and WWII. However, the breed was revived largely due to the efforts of French breeder Raymond Triquet who, along with a group of diligent breeders, re-established the breed during the 1960s. Today, the population is growing beyond the breed's stronghold in France.

Whatever their history, these dogs have served as cattle dogs, bull-baiters, guard dogs and even fought in the infamous Roman arenas. They live mainly as house pets today, but they still enjoy having some sort of job to perform. 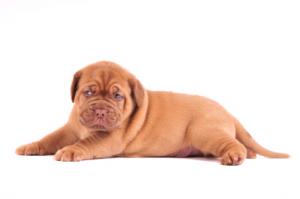 Despite the French Mastiff's ancient roots, it was not officially recognized by the American Kennel Club (AKC) until 2008 and goes by the name of Dogue De Bordeaux. Some of the other organizations that recognize this breed by either name include:

Before the 1989 film Turner & Hooch, the French Mastiff was still mainly unknown to much of the general public. Beasly, the canine star of the film, brought a lot of recognition to the breed that highlighted many of the joys and challenges of living with these dogs. Beasly passed away in 1992, but his work in the film still generates attention for the breed.

If you'd like to read more about the French Mastiff/Dogue de Bordeaux, check out these fun and informative references.

Breed clubs can be wonderful resources for more info on the Bordeaux. A few of the largest clubs include:

Obviously, the French Mastiff is not the breed for everyone and ownership should never be undertaken lightly. Puppies grow rapidly and training is an absolute necessity. Health care costs are also a frank reality for this breed. Do your research and make sure you fully understand the breeds' characteristics, then visit several breeders to gain first hand knowledge of these dogs. Only decide to bring one home if you plan to give him a home for life. For further information about the breed and rescue efforts, visit DDBS.org.