People's understanding of dog behavior has changed significantly over the past few decades. It used to be that dominance was used to describe many inappropriate behaviors in dogs but over time this has been discarded as a useful description. Modern trainers and behaviorists now focus on the underlying causes of a dog or puppy's actions to modify their behavior based on the new understanding of canine communication and cognition.

What Is Dominant Behavior in Dogs?

Describing a behavior as "dominant" in and of itself is incorrect because dominance describes a social relationship between two or more animals. It should not be used to describe a dog's temperament. While different levels of social status can exist among dogs, aggression is generally not related to hierarchies but rather to fear, anxiety, stress, genetics or medical issues. Unfortunately, this misunderstanding of dog behavior and ineffective, intimidating training techniques can still be found all over the internet.

Why Has the View of Dominance Changed?

Previously, dog behavior was explained through watching and interpreting wolf behavior, with the idea of an aggressive alpha wolf that lorded over a pack through intimidation. However, the more scientists studied wolves, they realized that wolf packs actually function more like families and while there is a leading "alpha" male and female, they run the pack cooperatively and not through aggression. Dr. David Mech, a biologist who originally coined the term "alpha" wolf has spoken out about these misconceptions, as well as the inappropriateness of using wolves to view dog behavior. There are similarities between the two species but many differences as well.

What Does This Mean for Dogs?

Behaviors that previously were assigned to "dominance" and solved through methods to "be the alpha" over your puppy or dog are now looked at to determine why the dog is doing them. For example, a puppy that is growling when touched may be undersocialized or had a traumatic event around strangers and is uncomfortable and scared of handling. It could also mean there is a medical issue causing pain, and he is growling to let you know he's hurting when touched. Qualified behaviorists and trainers now seek to understand the environmental and biological factors affecting your dog to alleviate these behaviors and focus on positive reinforcement and behavioral enrichment to solve problems.

There are many behaviors that puppies can exhibit that were previously interpreted as dominance. Understanding more about how dogs communicate, their body language, and what can lead to problem behaviors is a much more effective way of learning about and solving these issues.

Guarding food, toys, beds, or even areas of a home can happen with puppies and adult dogs. It's actually a natural behavior for dogs to do this but in the case of resource guarding that includes stiff body language, growling and even biting, it's one that's gotten out of hand. Generally puppies will do this out of fear, anxiety or stress. Some puppies just out of the shelter may do it as well if they've had a poor first few weeks of life which included lack of food and other items. Some tips on working with a resource guarding puppy are:

Aggression to Other Dogs

Some puppies will get into fights with other puppies or adult dogs due to stress, to guard food or objects, or if the other animal has a medical issue. They may also do it if they have a breed disposition toward it as some breeds may be inherently less friendly to other animals such as terriers. You may also only see this behavior when the puppy is on a leash but otherwise he's fine with other dogs. There are a few important steps involved with dealing with a dog aggressive puppy:

A puppy that shows aggression toward people, such as growling, snapping or biting could be doing so for a variety of reasons. It may be fear, stress or anxiety, territorial behavior or medical issues. Breeds that were bred for guarding may show protective behavior around your property. Some dogs may also have a disposition toward aggression passed on from their parents. Poor socialization, traumatic events and rough handling can also lead to these behaviors. If you have a dog showing aggression to strangers or family members, you should: 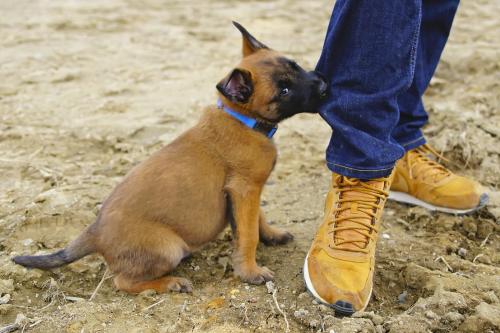 Trainers often hear owners of puppies complain that he or she "doesn't listen" and ignore commands and ascribe this to dominance. Most often this is due to poor training and the dog simply doesn't understand what is wanted off him or has been reinforced for the wrong behaviors. If your puppy has this issue, enroll him in a good obedience class, or even better work one-on-one with a trainer who can coach you about good training basics like timing, rate of reinforcement and understanding dog body language.

Other Types of Aggression

Two less common forms of aggression that may be blamed on dominance are idiopathic aggression, which is aggressive behavior that truly appears to have no clear trigger, and aggression based on medical issues. Dogs that are in pain may act aggressively and appear unwilling to be handled by you. Idiopathic aggression is sometimes also called "rage syndrome." In both cases, a full medical workup by a veterinarian and a consult with a veterinary behaviorist or certified behavior professional is the best course of action as these are not issues that can be treated on your own.

If your puppy shows behaviors that concern you, try to look at the world from their perspective and figure out what could be causing the problem. This is far more effective and positive than believing your puppy is out to control you or other dogs and is scientifically more accurate. Regardless of the behavior, if you feel uncomfortable about how to work with your puppy, do not hesitate to work with a qualified behavior professional who can teach you about how to communicate with your puppy and develop a behavior modification plan. Always seek to work with professionals who follow the American Animal Hospital Association's guidelines on canine and feline behavior management which stresses using low-stress, low-fear and non-confrontational approaches that disavow using aversive training methods and dominance concepts.