Is it wise to give a pregnant dog a rabies shot? If your dog is due for her rabies shot but she's pregnant, it's important to know if giving her the shot could harm the puppies.

About Dog Pregnancy and the Rabies Vaccine

Sometimes it can happen that your dog's rabies vaccine becomes due right around the time she's pregnant or in her heat cycle. Or, she's never been vaccinated before despite becoming pregnant. If this is the case, there can be some risks to the puppies where your veterinarian may advise you to wait to give the shot.

When a vaccine is given to a dog, it is designed to stimulate the dog's immune response. The body produces antibodies to the disease as part of the response and this helps the dog develop immunity to a disease. The problem with vaccinating a dog that is pregnant is that the puppies, even if they're healthy, are not in the same condition as a normal adult dog. The puppies simply can't fight off the vaccine, whether it's in a "live" or "killed" form, in the same way and can become sick and die, resulting in a miscarriage.

Another problem with vaccinating a pregnant dog is that it disrupts the normal schedule of how a mother's immunity is passed on to the puppies. When the puppies are first born, they are protected by the immunity they received from her for a period of about eight weeks. After that, puppies receive their own set of vaccinations and in the case of rabies, this is usually not done before 12 weeks. If the puppies survive the mother receiving a vaccination during pregnancy, it can increase the amount of immunity they have and throw off the "normal" schedule of immunity which makes it harder to vaccinate them properly on their own.

Options for Vaccinating a Pregnant Dog for Rabies

One difference between rabies and other types of vaccines is that rabies vaccines are "killed" as opposed to live. As a result, it can be recommended by a veterinarian to be given during pregnancy, especially if it's due to a safety. Your veterinarian may also advise you to give the vaccine if your state law on rabies vaccines mandates it and the vet has no leeway to allow you a legal delay. Even though a killed vaccine is safer, they still could result in a spontaneous abortion depending on the condition of the puppies in-utero and if it was given during the first four weeks of the pregnancy.

When to Wait to Revaccinate

If your dog was previously vaccinated and is due again during her pregnancy, the best course of action is to wait until she's given birth to revaccinate her. Likewise if she's never been vaccinated for rabies prior to becoming pregnant, it's safest to wait to administer the rabies vaccine if your vet agrees and you can legally do so.

Vaccinating for Rabies During a Dog's Heat Cycle

It is safe to give a rabies vaccination to a dog during her heat cycle prior to a mating as long as it's not given right up to the point before a planned mating will occur. You should allow a few days between the shot and a planned mating. This is because receiving a vaccine can have some temporary side effects include weakness and a mild reaction that will be hard for a dog to recover from if mating is thrown into the mix as well. It's also possible that it may disrupt the immunity that the embryos would normally receive. The best time to vaccinate a dog for rabies is several weeks prior to a planned breeding as this ensures no ill effects for her and her future puppies.

Vaccinating a Nursing Dog for Rabies

Once your dog has given birth, your veterinarian will also likely advise you to wait until the mother is done nursing the pups before giving the vaccine. A nursing dog is under a lot of physical stress, as she is both recovering from being pregnant and giving birth and using her resources to feed her newborn pups. Giving her a vaccine at this time could expose her to infection as her immune system may not have the strength to produce antibodies to fight it off. While the vaccine and its effects will not pass to the puppies through her milk after the first few hours of their life, it may make it harder for her to produce milk and feed them if her physical resources are rapidly depleted. 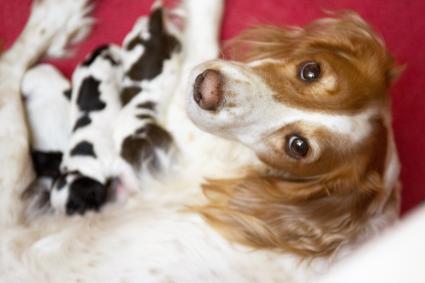 If your dog is pregnant or nursing and has never been vaccinated for rabies, the best thing to do is keep her in an entirely clean and regularly sanitized environment. She also should avoid contact with any dog. Her risk of contracting infection is much higher for other diseases that dogs are normally vaccinated against such as parvovirus, compared to rabies which is encountered less often. Still, it's important not to minimize the risk and make sure your dog has no opportunities to contract this deadly disease.

Vaccinate for Rabies Before Mating

While accidents can happen, a responsible breeder will ensure that a bitch has all of her vaccinations, including rabies, administered several weeks before her heat cycle and mating. This is the safest way to ensure her health and safety and the success of her puppies, as well as making sure she's in the best health prior to dealing with the physical toll of mating and pregnancy. Always discuss vaccinations and when to give them with your veterinarian who can provide more information and advice on your individual dog's situation.