If you own an unspayed female, knowing the signs a dog is coming into season can be very important in managing her reproductive cycle. Learning the stages of the cycle will allow you to recognize symptoms like personality changes, appetite changes, and more as symptoms of a dog in heat rather than something that requires a visit to the vet. It could also help you prevent having new puppies on your hands when you didn't plan for them and allow you to plan for puppies when you do want them.

Recognizing the Symptoms of a Dog in Heat

To better understand the many signs a dog is coming into season, it's best to break down the various stages of the average 21-day heat cycle. Doing so can help you determine which part of the cycle your bitch is in, and it can also help in planning or preventing a litter. Keep in mind that the 21-day cycle is just a guideline, and every dog is different. According to VetInfo.com, a heat cycle can be anywhere from seven days to four weeks long. The heat cycle usually occurs twice a year though some dogs will go more or less than six months between cycles. Because heat cycles only happen for a short time about twice a year, they are referred to as "seasons" which is the basis for the phrase that a dog is "coming into season."

Proestrus is the term used to describe the initial portion of the heat cycle. This period can last from seven to ten days, but many bitches typically experience about nine days in proestrus. According to DogBreedInfo.com, the first sign that the dog is going into heat is the swelling of the vulva. However, the swelling as it relates to the bleeding isn't completely predictable. The vulva could swell one week to a day before the bleeding starts.

During this time, you'll notice many but perhaps not all the following symptoms of a dog in heat.

The onset of estrus marks the fertile portion in the heat cycle where the ovaries begin to release eggs for fertilization. During this period, symptoms include:

As diestrus takes over, the fertile portion of the heat cycle comes to an end.

Signs of the end of the cycle include:

Gradual disappearance of vulva swelling: Most of the swelling is gone within one week's time, but the vulva may remain slightly enlarged after the first heat cycle has taken place.

Cessation of flirting: Whether bred or not, the bitch now lacks the conditions to mate and is no longer interested in flirting. 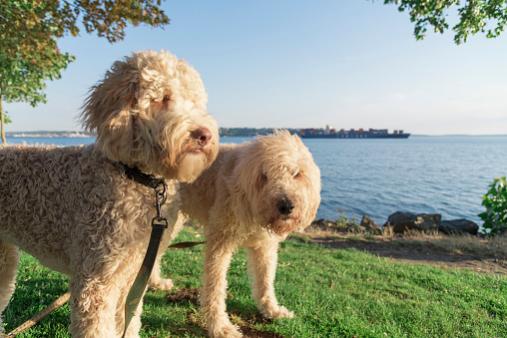 Gradual cessation of discharge: The pinkish-tan discharge of estrus once again turns red, but now tapers off over the course of the final week. When the swelling of her vulva ceases and it appears normal and free of any discharge or blood, then her heat cycle is completed.

Diestrus can be extended to encompass the 63-day period of the average canine pregnancy if a breeding was successful.

If no pregnancy results from a breeding during the heat cycle, the bitch goes back into anestrus. This is the five to eleven-month period of inactivity that eventually cycles back into proestrus to begin the cycle anew.

It's important to realize that a dog can go into her first heat as young as six months of age. The age of first heat will vary by size of dog and breed and can start anywhere from six to 15 months. If your female is still a puppy and unspayed you will need to be extra vigilant during this time and don't let her young age make you think she's safe from entering her first heat cycle.

Caring for a Dog in Heat

Your dog may be very uncomfortable during her heat cycle and it's important to do your best to keep her comfortable. If she appears more irritable than her normal self, give her space and make sure children or other pets are not bothering her. On the other hand, they may want more attention and cuddling and you should do what you can to keep her happy. Exercise is a great way to help a dog during heat, assuming she's feeling up to it and you can keep her supervised. There are two major concerns with a dog in heat for owners:

Can a Spayed Dog Go Into Heat?

It is not unusual for dogs that have been spayed to show signs of going into heat a short time after they have had the ovariohysterectomy. This is called Ovarian Remnant Syndrome and is caused by some remaining ovarian tissues still functioning. These tissues secrete hormones that stimulate the signs of the heat cycle in a dog, such as her vulva swelling, discharge from her vagina, and signaling to male dogs that she is in heat. If you notice these signs, discuss with your veterinarian and he or she can perform a physical exam and blood tests. It may be a second surgery is needed to complete the spay surgery.

Pay Attention to the Signs

Paying attention to the symptoms when your dog goes in heat will allow you to prepare for puppies or prevent mating from taking place. Understanding and timing the cycle is imperative if you have a dog that hasn't been spayed.

89
Comments
© 2006-2020 LoveToKnow, Corp., except where otherwise noted. All Rights Reserved.
Resources, Advice & Tips for Covid-19
Read More
Symptoms of a Dog in Heat