At first sight, regurgitation looks a lot like vomiting. However, the two actions are actually very different. This difference matters because the causes and treatment of regurgitation differ from those of vomiting.

To help your regurgitating dog, the first step is to realize he's not vomiting, but passively bringing food back up from his gullet. To break things down, as suggested by Medicine Net, the key points to note include:

How Does Regurgitation Differ From Vomiting?

Using what you now know, it's easier to spot the subtle differences between the two actions. DVM 360 explain clues to regurgitation are:

Contrast this with vomiting when sloppy, partly digested food is produced after abdominal contractions and retching noises.

There are many causes, some related to narrowing of the esophagus and others to inflammation of the lining of the gullet. Some problems are present from birth while others develop as a result of illness or injury.

Narrowing of the Esophagus

Anything that narrows the esophagus will prevent food from passing along. This could be due to:

Disease elsewhere in the body may affect the nerve supply or muscular coordination of the esophagus so it doesn't help food get to the stomach. The most common causes include myasthenia gravis, Addison's disease, myopathies, and idiopathic megaesophagus. The latter is an inherited problem that is most commonly found in certain breeds such as the German Shepherd, Labrador Retrievers, Irish Setters, Wire Hair Fox Terrier, Miniature Schnauzer, Great Dane, Shar Pei, and Newfoundland.

Inflammation of the Esophagus

When the lining of the esophagus is inflamed, it tends to 'reject' food. The causes of esophagitis include acid reflux from the stomach, chronic vomiting, hiatus hernia or drug irritation. Regurgitating after surgery is a common result of esophagitis which occurs when the acid moves into the esophagus while the dog is under anesthesia. Similarly, esophagitis can happen only or primarily at night because the dog's relaxed sleep state can make it much easier for reflux occur which is also found in humans. Eating too quickly or exercising too intently and too soon after a meal can also irritate the esophagus. It can also occur if there's a physical blockage from something eaten, such as bones in a raw food diet. If you also notice your dog regurgitating simply clear foamy or white-colored liquid or mucus, this can be a sign of esophagitis, although if the dog is vomiting instead of regurgitating this may indicate gastritis, kennel cough or serious disorders of the kidney, pancreas or liver.

Left untreated there could be serious consequences such as aspirational pneumonia (inhaling fluid or food into the lungs) or long-term malnutrition and weight loss. Thus, it's important to get the cause of the problem diagnosed. If your dog has regurgitated just once, it's not likely an emergency, but it's wise to get your dog to a veterinarian as soon as it's feasible before it happens again. You want to make sure nothing life threatening is the cause, such as a foreign body in the esophagus or if a serious side effect like aspirational pneumonia is a risk.

Your vet will examine the dog and take a history. This helps to work out if the problem may have been present from birth or developed because of disease. Next, she may run tests such as an x-ray of the digestive tract, perhaps using barium. This follows food through the gut to highlight any hold-ups. Radiographs also help diagnose complications such as pneumonia, which requires urgent treatment.

The history may point toward an underlying problem, such as Addison's disease. Screening blood tests and specific tests help to narrow down the diagnosis. In some cases, further investigation is required to highlight anatomical problems (such as a vascular ring anomaly). If disease of the esophagus is suspected the endoscopy gives the clinician a direct look inside the gullet and allow them to collect pinch biopsies of tissue for analysis.

If the problem starts suddenly and unexpectedly, the vet may suspect irritation of the esophagus and suggest starving the dog. This allows your dog's esophagus to 'rest,' and along with antacid medications and intravenous fluids, may allow the dog to recover uneventfully.

If your vet identifies an underlying cause, it's crucial to treat this. The answer may be surgical, such as removing a foreign body or a tumor, or medical such as the use of drugs to treat myasthenia gravis or Addison's disease. Unfortunately, in some cases, the esophagus becomes like a stretched balloon and loses its ability to contract. This becomes a physical problem because, like that stretched balloon, the esophagus has lost its elastic recoil. Instead of contracting and pushing food into the stomach, the esophagus gets bigger and more dilated as food piles in. This is called a megaesophagus and requires special management. 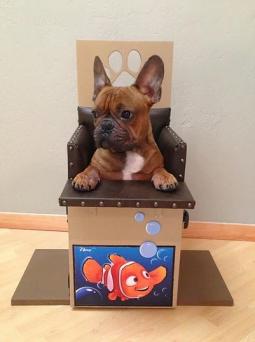 Some dogs are left with a long-term regurgitation problem. VCA Hospitals suggest these dogs are best helped by making changes to the way they are fed. This is especially true if your vet diagnoses your dog with megaesophagus since there is no effective medical or surgical treatment. Control strategies include:

It takes a dedicated owner to commit to hand feeding his dog and then keeping the dog's forequarters raised. Unfortunately, even with the most vigilant care, complications such as weight loss or inhalation pneumonia can occur. The latter happens if the dog breathes in when food or water is being regurgitated. Fluid enters the lungs to cause a potentially serious infection.

Signs of pneumonia include rapid shallow breathing, lack of appetite and listlessness. Any dog with a history of regurgitation that shows these signs should see a vet immediately. A prompt course of antibiotics could prevent the problem from becoming life-threatening.

If your dog vomits or regurgitates regularly, get him seen by a vet. If you still aren't sure if your dog is vomiting or regurgitating, video the dog with your phone. There's nothing quite like the vet seeing the event firsthand, for helping things along in the right direction. As with so many medical conditions, seeking help in the early stages can make all the difference to the long-term outcome for your pet pal.