One of the best thing you can do for your dog is crate train them. Not only is it probably the best way to house train a puppy, having a dog that likes the crate gives you a safe place to keep him when you need to out or when visitors are over. It's also useful if you ever need to travel with him and have a dog that already is comfortable staying quietly in a crate.

The steps to crate train a puppy are quite simple but the key to the steps are being consistent and remaining relaxed and calm if you have a setback. It's also very important to start with a good foundation which includes where you put the crate, type of crate, crate bedding and your initial introduction to it.

While some owners prefer to keep the crate outside of the bedroom at night, ideally having the crate close to you will help ease the puppy at night, especially in the beginning. 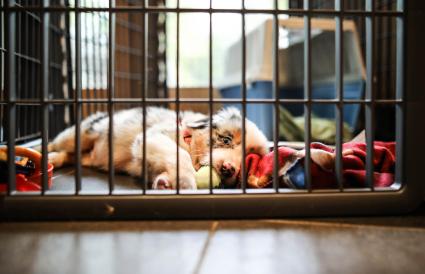 Step Two: Decide Which Type of Crate to Use

The main types of crate are the solid plastic airline-type crates and the open-wire crates.

Step Three: Make the Crate a Good Place to Be

Your puppy should be as comfortable as possible in the crate.

Step Four: Never Use the Crate to Punish

You should never put the puppy in the crate when you're angry and want to discipline him. This can cause the puppy undue stress and he'll come to see the crate as meaning something bad has happened or is about to happen. This will make crate training very difficult.

You want to start out with pairing the crate to good things to reinforce to the puppy that it's an excellent place to be. It may seem like this is more work compared to just placing him in the crate, but it's worth it to spend time doing this before moving on to the next steps. A puppy that loves the crate is much easier to work with than one that's already developed a negative perception of it.

Once your puppy is happy going in and out of the crate and having the door closed for a short time, you're ready to move on to training him to be in their for longer periods.

At night time you'll follow the same steps with some additional caveats:

There are some guidelines to follow both for crate training and using the crate to confine your puppy.

When you have an older dog, perhaps one you've adopted from a rescue, the steps to crate train them are very much the same as a puppy with a few slight differences.

How to Deal With Crate Training Problems

Of course, all dogs are individuals and not everything will go as smoothly as you'd like. Some dogs inadvertently develop a fear of the crate despite your best efforts or based on their previous history.

It's very normal for a puppy to whine and cry when put in the crate and with most puppies it will dissipate over time, much like a toddler crying himself to sleep. However, some puppies become deeply panicked and this needs your attention.

Eliminating in the Crate

Sometimes puppies will pee and poop in the crate despite a dog's natural inclination not to do this in a small, confined space. This is a very common problem with puppies purchased from pet shops and puppy mills.

Puppies and adult dogs will destroy toys and their bedding in the crate and this is an indication that the dog is bored. It also can be a sign a puppy is teething.

One of the difficult parts of crate training is deciding what to do if you work an 8 hour day or longer. You have two options in this case.

Teach Your Dog to Love the Crate

There's a lot of initial preparation work involved in training your dog to love his crate, but taking your time and working with your puppy or adult dog's comfort level really pays off in the end. Having a dog that will happily race into his crate and lay down when asked can make your life, and his life, much easier. Proper crate training can speed up your house training success as well.

2
Comments
© 2006-2021 LoveToKnow, Corp., except where otherwise noted. All Rights Reserved.
How to Crate Train Your Dog