You may not have heard of the Catahoula before, but these dogs are one of Louisiana's best kept secrets. While they are not a common breed, they happen to be the state's official dog. Catahoulas like to think for themselves, and although they are medium in size, they make up for that with big personalities. Add to that mix this dog's unusual spotted coat and oddly piercing eyes, and you'll begin to see why this is no ordinary canine. Are you ready for a dog who thinks he's your equal and maybe even just a little higher in the pecking order than you are? That's the charm and the challenge of life with a Catahoula!

True working dogs, Catahoulas are not bred for uniformity of appearance. Even so, there are a number of common characteristics among Catahoula Leopard Dogs.

You can read a complete breed standard for the Catahoula at the United Kennel Club website.

As is the case with most herding breeds, Catahoulas tend to be territorial, and are very protective of their homes and property. They make excellent watch dogs. They are loyal and loving with people they know, but they are not instantly drawn to strangers. It takes a Catahoula quite a while to warm up to new people. They are very protective of their human families, as well as of the livestock they are charged with herding and keeping safe.

Catahoulas are fiercely independent creatures that sometimes come across as being rather standoffish in nature. They can be very stubborn, and tend to have very strong alpha tendencies.

Catahoulas insist on taking the dominant position among other pets in the household. They are particularly stingy with food, and will often use their herding instincts to chase other pets away from the food and water bowls. Since these dogs will take the dominant positiion whenever possible, they are typically not the ideal companions for small children unless there is adult supervision. They can make good companions for older children and adults who are able to display firm but fair leadership to them on a consistent basis.

Owners who do not quickly establish themselves as the master with their Catahoula puppies may find themselves in for a lifelong struggle for the dominant position in the relationship. This is why early obedience training is so important with this breed of dog.

These dogs take more time to mature than many other canine breeds of similar size. It generally takes between two and three years for a Catahoula to begin exhibiting the behaviors of a full grown adult dog.

Since most Catahoulas have very short coats, their grooming needs are relatively simple. 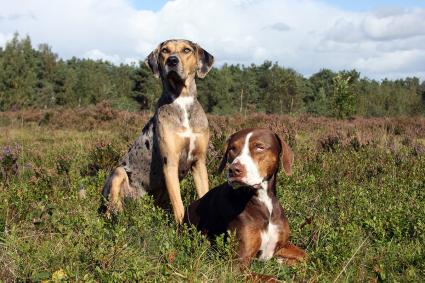 These dogs have a lot of strength and energy, but they are not hyperactive. With all this energy, they do need to be exercised frequently. A good daily walk of at least 30 to 40 minutes will provide the minimum amount of exercise needed to keep them in shape. Walking actually helps relieve stress, too. This will help keep a Catahoula from developing destructive behaviors like nuisance digging and chewing.

As with the other herding breeds, Catahoula Leopard Dogs are most content when they are working. These highly intelligent herding dogs have long been used to herd wild pigs in the Louisiana swamps, and they are also excellent livestock herders. They are aggressive herders that work best in groups. Unlike some other herding dogs, they don't nip at the heels of their wards. Instead, they continually run circles around the animals they are trying to direct, basically irritating them into moving in the desired direction.

Even though their natural instincts are to work, Catahoula Spotted Leopard Dogs also make excellent pets, assuming their owners are prepared to handle such energetic and sometimes aggressive canines. Owners should plan to enroll in obedience training with their Catahoula when their dog is very young. Some Catahoulas also take very well to agility training activities. 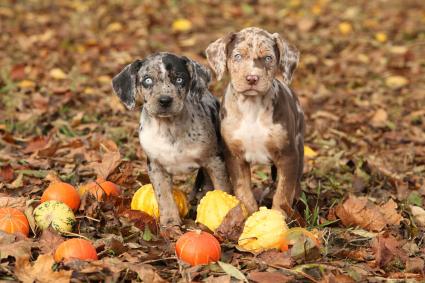 It's a good general rule for puppies of any breed to receive plenty of socialization and obedience training, but this is absolutely imperative for Catahoulas.

These dogs have big personalities and they are born to dominate. If you do not set yourself up as your dog's pack leader from day one, you are bound to have difficulties his whole lifelong. These dogs are not the breed for passive owners because they'll set their own rules and become aggressive if their human companions don't comply.

It's your job as leader to establish firm boundaries for your pet, and you'll need to provide firm but fair guidance and behavior expectations. The behavior and actions you allow your pet to get away with as a puppy are exactly what he'll expect to get away with as an adult, so start out with the same boundaries from the very beginning, back them up with formal training, provide plenty of positive reinforcement for the behaviors you want, and you should wind up an excellent companion.

Of course, your Catahoula will in all likelihood challenge your authority from time to time just to test if he can take over as pack leader, but these challenges are not difficult to overcome if you remain consistent in your leadership and don't become lax about behavioral expectations. These dogs require active leadership throughout their lives, but what you get back from them is more than enough reward for your efforts. 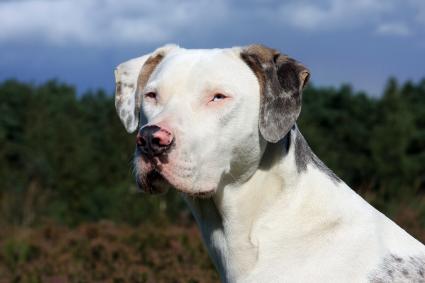 Overall, Catahoulas tend to be very healthy animals. The most common problems in this breed are:

A very hale and hardy breed, these dogs are also naturally long-lived. It's not unusual for them to live 12 to 15 years and remain spry well into old age.

History of the Catahoula Leopard Dog 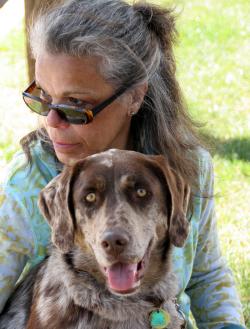 The exact origins of the Catahoula Leopard Dog are unknown, but it is believed that these dogs first emerged in the United States in Louisiana. Therefore, these canines have long held a special place in the heart of Louisianans. The Catahoula was named the official state dog in 1979.

According to the American Kennel Club's account of the breed history, Spanish explorer Hemando de Soto's expedition arrived in Florida in 1539 and journeyed into Louisiana. The Spaniards brought their dogs with them, and it's believed this group included Mastiffs, Bloodhounds and Greyhounds. Historians speculate that these dogs interbred with the native population of dogs that lived with the local Indians and the descendents of those litters eventually evolved into the prototype for the Catahoula.

As for how the Catahoula became such a natural herding dog, DeSoto's expedition once again figures prominently in the story. The Spaniards brought a herd of hogs with them to ensure they had a good food supply. After DeSoto's death, many of the hogs were slaughtered, but some were also given to the local Indians. These hogs multiplied quickly. Approximately 300 years after the hogs' introduction to the region, their numbers had grown so high that they had become a nuisance. Early European settlers began using the native dogs to herd and catch the hogs in order to thin the population. The dogs would literally surround a hog, box it in, and then wait for their human companions to help them complete the job.

After seeing how efficient these dogs were at working with livestock, people began selectively breeding more of them for this very purpose, and that's how the herding instinct became so firmly established in the breed.

How the Breed Got Its Name

Catahoula is a Choctaw Indian word which translates as "sacred lake." Since the dogs originated in the area around Lake Catahoula, it was only natural that they eventually became known as Catahoulas themselves. Since the dogs carried spotting in their coats, similar to a leopard, this description was worked into the name. Today, you'll hear these dogs referred to as Catahoulas, Catahoula Curs, Catahoula Leopard Dogs and Louisiana Catahoula Leopard Dogs. No matter which name is used, each refers to the same breed.

Like breeding lines in many breeds, certain lines of Catahoula dogs became quite well-known for having a very distinct look. The three most famous include: 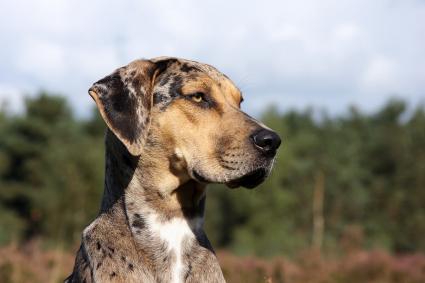 Although these dogs have been around for hundreds of years, they have only recently been acknowledged as an official breed by certain kennel clubs, including the United Kennel Club in 1995. Some of the other dog clubs associated with this breed include:

Catahoulas became part of the American Kennel Club's Foundation Stock Service in 1996, but as of 2011, they had not yet gained full recognition and are still considered a rare breed by that club's standards.

If you'd like to delve a little deeper into this breed's background, check out the following books.

Assuming you can handle living with an overgrown puppy for two to three years, there is nothing more rewarding than forming a bond with a loving and loyal Catahoula. If you're interested in adding a Catahoula to your household, you can find a directory of breeders with these puppies for sale on the American Catahoula Association's website. The price for Catahoula puppies typically ranges from $300 and $500. You may also want to consider adopting a rescue dog through the nonprofit Catahoula Rescue organization.