Canine liver disease is one of the top causes of non-accidental deaths. Owners should be alert to the signs and symptoms of this condition, especially in affected breeds.

Function of the Liver

The liver is an essential and unique organ. It has the capability of functioning even when affected by disease. It also can regenerate itself, unlike other organs. This makes early treatment especially effective.

The liver is involved in all body processes in some way. It removes toxins from the blood, helps with waste removal and produces bile for digestive purposes. It is the cleaning system of the body.

Location of the Liver

The liver can be found between a dog's diaphragm and stomach and is the biggest organ in the abdominal area. While it expands across both sides of a dog's body, the majority of the liver is found on the right side.

There is no one specific cause of liver disease in dogs. Inflammation can often be caused when the tissue becomes infected due to any number of reasons such as fungus, parasites, cancer or a viral infection. Just a few of the more common causes include:

Dogs in the early stages of canine liver disease may display no visible symptoms. This is because the liver is so successful at working at a diminished capacity. As the disease progresses, the following signs of liver problems in dogs may appear:

Another side effect of liver disease you won't be able to see but your vet can diagnose is an enlarged liver. Enlarged livers can develop due to a number of conditions of which liver disease is just one. Your dog's prognosis with an enlarged liver varies and simply be treated and cured through diet and supplements. For other dogs, it may result eventually in death. Some other causes can include anemia, cysts and tumors, hepatitis, Cushing's disease, and heartworm disease. You should discuss with your vet any signs of an enlarged liver which can be: 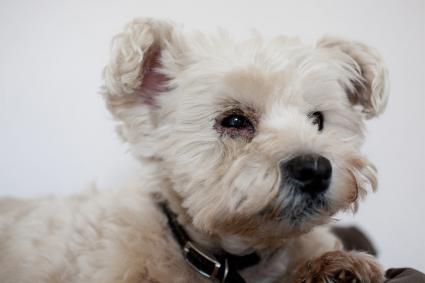 A vet will diagnosis liver disease based on a physical examination and blood test. The physical examination will review possible symptoms, especially an enlarged liver. The blood test will measure the level of liver enzymes. A higher than normal level of enzymes indicates the dog's liver is producing too much bile and too much ammonia in their blood.

Because it involves an enlarged liver and similar liver disease symptoms, dogs with Cushing's disease are often misdiagnosed with liver disease and vice versa. Always work with your vet to get an accurate diagnosis.

Since the liver can heal itself, treatments are usually designed to take the stress off the liver to allow it to regenerate. In many cases, this is exactly what happens. The dog will recover after treatment without permanent damage.

Eliminating the cause of the disease is the first step in treatment. In the case of a bacterial infection, for example, your vet will probably prescribe antibiotics. Many times, however, liver disease may be the result of other diseases such as hemolytic anemia. The treatment, in that case, becomes more complex.

Dietary adjustments are the most common treatment for liver disease in dogs. Speak with your vet about the appropriate diet for dogs with liver disease. Your veterinarian can discuss with you the options for adjusting the amount and type of protein, carbohydrates, and fat in your dog's food. Certain commercial dog foods are specially designed for dogs with liver conditions. If an enlarged liver is part of your dog's condition, the best diet for a dog with liver disease includes reducing salt and a protein increase may be included in your treatment plan, as well as adding in additional vitamins.

Your vet may also recommend supplements, especially zinc and vitamins K and E. You may also want to discuss herbal and homeopathic treatments that have been effective.

Not all cases are easily treatable. Some dogs have congenital abnormalities that may require more extensive treatment including surgery. Liver cancer is also a serious form of liver disease. Treatment may include surgery and chemotherapy.

The Stages of Liver Disease

Some breeds are more prone to develop liver disease than others. This certainly does not mean that every dog of that breed will develop liver problems. Nor does it mean that other breeds will never have a liver disease. It means, instead, that owners of these breeds should be more alert to possible symptoms and have their dogs regularly screened for liver issues.

Breeds that seem to have a propensity toward liver problems are:

Early detection is the key to successful treatment of liver disease, so contact your vet as soon as you notice possible symptoms.