Like people, dogs can have anxiety attacks or phobias. It is estimated that 17% of dogs suffer from separation anxiety, while phobias, aggression, and compulsive disorders are also commonly related to an underlying anxiety disorder. There are medications and other options for canines that suffer from anxiety.

What Are Dog Anxiety Medication Options?

Anxiety affects a large percentage of dogs. While the popular myth is that anxiety medication should only be used as a last resort to treat anxiety in dogs, that is a misconception that can lead to greater anxiety for your canine friend. On her blog, Certified Veterinary Technician and Certified Professional Dog Trainer Sara Reusche indicates that anti-anxiety medication can help to provide quick relief from your dog's anxiety while additional behavioral modification and training steps are initiated. Additionally, many non-pharmaceutical products are available that may help relieve anxiety.

This class of drugs includes diazepam (Valium), alprazolam (Xanax), chlordiazepoxide (Librium), lorazepam (Ativan) and clonazepam (Klonopin). According to Plumb's Veterinary Drug Handbook, the exact mechanism of action for these medications is unknown but may involve modulation of serotonin, gamma-aminobutyric acid (GABA), or acetylcholine levels in the central nervous system.

The drugs in this category that are used in dogs include fluoxetine (Reconcile or Prozac), paroxetine (Paxil), sertraline (Zoloft) and fluvoxamine (Luvox). According to the British Small Animal Veterinary Association's Small Animal Formulary, these medications work by increasing serotonin availability in the central nervous system.

Buspirone is the only serotonin agonist type of medication used in veterinary species. According to the British Small Animal Veterinary Association's Small Animal Formulary, it works by increasing serotonin levels, but through a different mechanism than with SSRIs. This drug can take three weeks to become effective, and side effects include sedation, low heart rate, and stomach upset, although the drug is typically well-tolerated. 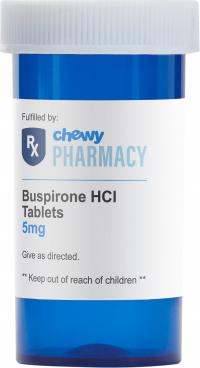 Trazadone is an antidepressant which can function as a serotonin antagonist and reuptake inhibitor. It is often used in conjunction with other drugs to provide the same benefits as a benzodiazepine. Trazodone is used for treating anxiety, fear aggression and other types of behavior problems in dogs. 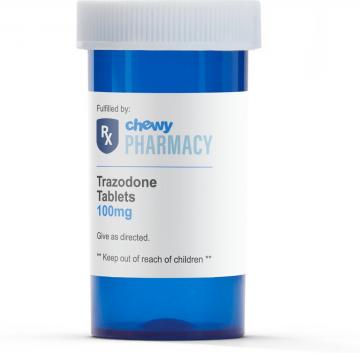 It is not always possible to treat your dog's anxiety disorder with a single drug. There are several options available for safely combining medications to help achieve the desired effect for your dog. Always consult your veterinarian about specific side effects and concerns for the exact combination of drugs that your dog is prescribed.

A Note on Acepromazine

Historically, acepromazine is a drug that has been frequently used to treat anxiety in dogs. It is a phenothiazine tranquilizer and can be used as part of an anesthetic protocol, or for dogs with respiratory disorders. According to PetMD, it has fallen out of favor for use in the treatment of canine anxiety because there are newer, more effective drugs now available. It may also cause unwanted side effects, including increased noise sensitivity, dysphoria, or prolonged sedation. Acepromazine has minimal effect on anxiety and simply sedates your dog so that it only appears to be less anxious, leaving the initial problem untreated.

There are several over-the-counter products that may also be able to help treat anxiety in dogs are available. Such medications to calm dog anxiety could include pheromones, nutraceuticals, or supplements.

A pheromone is a natural substance produced by an organism that can elicit a social response in another member of the same species. D.A.P. is commonly recommended by veterinarians and behaviorists to help treat mild canine anxiety. It is often used as an anti-anxiety medication for mild thunderstorm anxiety. It is available in a diffuser, spray, or collar, and has no side effects or interactions with medications. Under the brand name Adaptil, this dog anxiety medication is available over the counter at Chewy Pet Pharmacy and other pet supply stores. 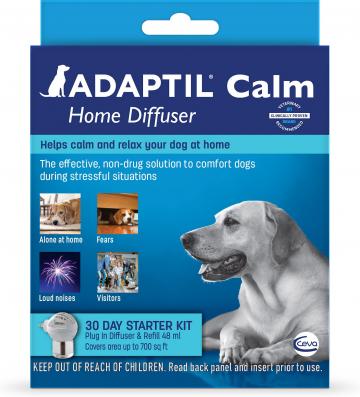 This supplement contains extracts of Magnolia officinalis and Phellodendron amurense and was shown to be 60% effective in a study of noise-related stress. There are no reported side effects, and it is available as a chewable tablet. Harmonease can be purchased from several sellers, including some veterinary offices or online retailers.

Anxitane contains an amino acid, L-theanine, that works on the nervous system of your dog, to help keep it calm and quiet. It should not be used for severe anxiety disorders, or in animals in which aggression is a component of their behavioral disorder. It is made by Virbac Animal Health and is formulated as a flavored, chewable tablet.

Composure is a chewable supplement similar to Anxitane. It contains L-theanine but also has two additional ingredients. Thiamine is supposed to help the body build other amino acids that help to restore the nervous system's neurochemical balance. The proprietary C3 (colostrum calming complex) works to reduce stress and improve cognitive function. There are no reported side effects, and dogs seem to like the flavor. 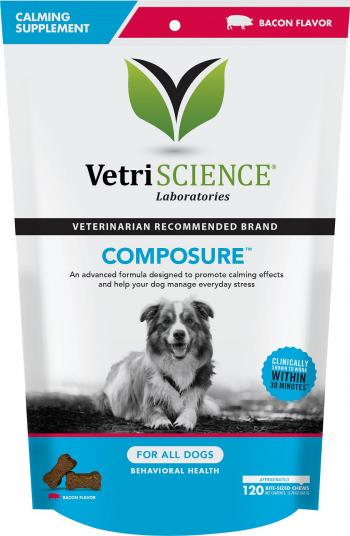 In cases of very mild anxiety, your veterinarian may suggest using Benadryl. Benadryl has a sedating effect that can make your dog sleepier but does not actually alleviate anxiety so at best it can be a temporary, short-term solution. It also goes by the generic name of diphenhydramine HCL. 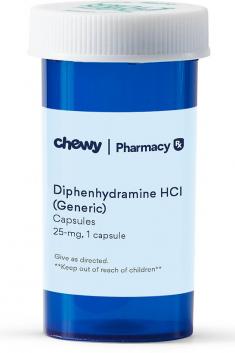 Signs of Anxiety in Dogs

Anxiety can take many forms and display symptoms you may not expect. Often many dog behavior problems are rooted in anxiety. Some of the common signs of anxiety can be: 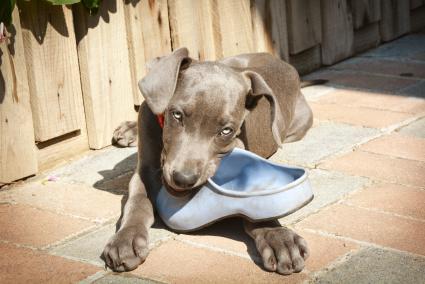 What Else Can You Do?

Often, dogs with anxiety disorders may not respond to only one type of treatment. Remember to consult your veterinarian if you have concerns about the medications or supplements that your dog is taking. Behavioral modification techniques are also vital to the overall treatment of anxiety in your dog.

All of LoveToKnow's product recommendations are hand selected by our editorial team and follow our editorial policy. For some but not all, if you decide to shop we may collect a small share of sales or other compensation.