English Bulldogs proved wrinkles were cute long before Shar Peis captured public attention. However, cuteness isn't the only thing these dogs have going for them. If you're looking for a faithful companion who can be quite dignified one moment and turn into a loveable clown in a flash, look no further than the Bulldog.

General Description of an English Bulldog

According to the American Kennel Club standard, Bulldogs are medium-sized dogs that are quite heavy and muscular for their frame. They have very broad, wrinkled heads and extremely short muzzles with undershot jaws. The skin is looser around their necks and shoulders, and you'll find more wrinkling in these locations.

Their chests are quite broad, but these dogs are a bit more narrow in the rear. Their legs are fairly short and heavy-boned, which gives them a rectangular appearance from the side. They have short tails that are either straight or "screwed," but they should always extend downward from their base.

Males of this breed tend to weigh in around 50 pounds, while females often weigh a little less. When you compare both sexes side-by-side, the female looks slightly smaller because she doesn't display the breed's main characteristics to quite the same degree as the male does. No matter which sex the dog is, no part of the its anatomy should be out of proportion with the rest of the body. Overall balance is more desirable than any one feature.

A Bulldog's coat should be very short, smooth, and glossy. There is no fringe anywhere on the dog, and the fur should lay flat without any waves.

Bulldogs come in several colors/patterns, with red brindle being the most desirable according to the breed standard. Other acceptable colors include the following:

Upon meeting a bulldog, you should get the impression that this is an intelligent, dignified fellow who seems friendly enough and knows how to cut loose and have a little fun when he wants to. This dog has a steady temperament, and he is very dependable around children if he is raised with them. Otherwise, he may tend to bowl over smaller family members during vigorous play.

This dog also makes a good guardian, but he shouldn't show signs of overt aggression. It should also be noted that some bulldogs can be overbearing and will try to dominate their human family if they don't receive early training.

A Bulldog needs a fair amount of training to bring out his best qualities. Begin training him as a puppy to not jump on people because he's going to be too heavy for you to tolerate this when he's an adult.

It's also a good idea to begin leash training him around eight weeks old so your pup learns to follow you before he's big enough to try to drag you around. Your pet will also breath easier if you use some type of harness rather than a traditional collar and leash. The pressure of the collar against his throat can irritate his trachea.

Full obedience training should begin between four to six months of age. This helps the dog learn his proper place in the family, and he'll be a happier and more cooperative pet because of it. 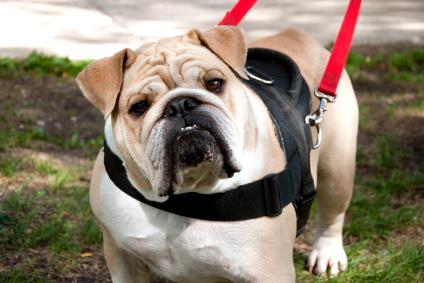 Bulldogs are less active than many breeds, but they can really benefit from moderate daily walks. Just don't expect your pet to go long-distance jogging with you because these dogs usually only run in short spurts.

That's not to say bulldogs can't be active. After all, who hasn't seen videos of these dogs manning their skateboards? They just don't have the sustained energy of an Australian Shepherd.

Bulldogs don't need a lot of bathing, and they don't shed a lot. Brushing them with a soft bristle brush two to three times a week will collect any loose fur and bring out a nice shine.

As for additional grooming, keep these tips in mind:

The English Bulldog's very unique anatomy requires a bit of extra care to keep him safe and healthy.

Some of the more common concerns include the following:

According to the Bulldog Club of America, some of the more serious health concerns in the breed include the following issues: 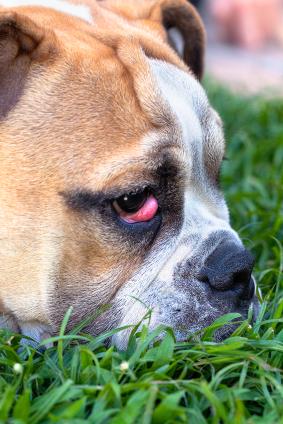 Origin of the Breed

According to the Bulldog Club of America, this breed was originally developed in England to help butchers subdue the animals they were about to butcher. This practice eventually developed into the dubious sport of bull baiting. Early bulldogs were aggressive because they needed this quality to do the job at hand. Once bull baiting was abolished, breeders began working to improve the breed's natural temperament, and that is how they became the loving, steady companions that they are today.

Even with their health concerns and physical limitations, English Bulldogs still make wonderful, fun-loving companions. If you think this might be the right breed for you, visit a few breeders and spend time around puppies and adult dogs in order to get a better idea of what it's like to live with these dogs. Only then can you decide if this dog will be a good fit for your life.

0
Comments
© 2006-2021 LoveToKnow, Corp., except where otherwise noted. All Rights Reserved.
Resources, Advice & Tips for Covid-19
Read More
What English Bulldogs Are Really Like