The presence of blood and mucus in dog stool usually indicates some sort of infection, parasitic infestation or other health condition. Although you should always consult your vet if a situation like this arises, it's helpful to understand what can cause this problem and what you should do for your dog in this situation.

Possible Causes for Mucus and Blood in Dog Stool

It's natural to wonder why your dog is pooping bloody mucus, but the reality is that there are many potential causes. Blood and mucus in your dog's stool can be a natural occurrence and your dog may be fine within 24 to 48 hours. Understanding the causes and symptoms can let you know when it's time to bring your dog to your veterinarian, but always give your veterinary office a call when you're unsure to keep your dog safe.

Most dogs will contract a case of worms at some point in their lives. Whipworms, tapeworms, and hookworms can all cause bleeding or mucus in the stools.

IBS, also referred to as colitis, is caused by irritation and inflammation in the large intestine, and it can produce both blood and mucus in the stools. IBS can lead to a yellow-colored mucus on the stool. IBS can be brought on by other primary causes such as whipworm infestation or a change in diet. 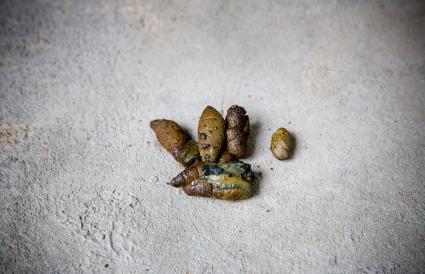 Chronic diarrhea is a long-term condition that is often accompanied by blood and mucus, and it can be caused by a number of health issues, including intestinal blockages, parasitic and viral infections, cancer, pancreatic disease and more. This makes it difficult to narrow down the exact cause of the diarrhea. Mucus in dog diarrhea can also indicate a negative reaction to something the dog ate or a change in diet, Irritable Bowel Syndrome or Inflammatory Bowel Disease.

Parvovirus attacks the lining of the gastrointestinal tract and produces large amounts of diarrhea loaded with blood and mucus. Coronavirus also produces blood in the stools, but there is a distinct lack of mucus with this particular virus.

Giardiasis is a condition is caused by a single-celled organism that invades a dog's intestines. It produces chronic diarrhea and stools filled with fatty mucus.

Dogs tend to eat a lot of things they shouldn't, and any object that can't be dissolved in the digestive system has an opportunity to cause a blockage in the stomach or intestinal tract. Straining and irritation can lead to bloody stools as well as mucus that is produced as a reaction to the irritation. A foreign instruction can also lead to an infection which will produce yellow mucus on the dog's stool.

Colon cancer can present some of the same symptoms as IBS, so it's sometimes overlooked when searching for the reason for bloody mucus in dog stool. Watch for weight loss as well.

Liver disease affects the production of proteins that support blood clotting, and this can lead to blood in the stools in some instances. It's also possible to mistake bleeding caused by liver disease for a bleeding ulcer, which can also produce dark, tarry stools.

The color and consistency of the blood in the stools helps the vet determine whether the blood originated in the upper or lower portion of the digestive system. This information helps the vet form an accurate diagnosis and treatment plan.

According to Pet MD, hematochezia is the term used to describe the presence of fresh red blood in the stool. This means the source of the bleeding must come from somewhere in the lower gastrointestinal tract. Hematochezia may be an indication of a serious health problem, or it could be something very minor. If the bleeding happens only one time, it is considered a transient event and is usually nothing to worry about. If the bleeding continues, becomes more severe or keeps recurring, take the dog to a veterinarian to determine the cause.

Some of the more common causes include: 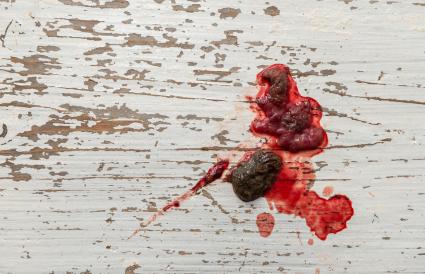 Melena is the term used to describe when a dog passes digested blood, so the blood passed through the upper digestive system first. The stools are shiny, sticky and black; they have the consistency of tar and smell very foul.

There are many causes of melena and most of them are very serious. The first thing your veterinarian must do is rule out the possibility of the digested blood coming from a wound the dog was licking or swallowing blood from its respiratory tract or mouth.

Some of the most common causes of melena include: 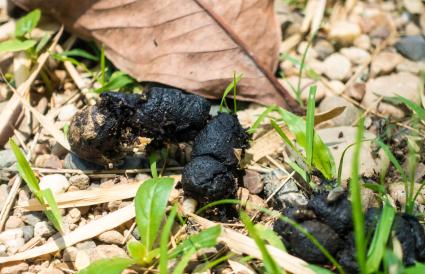 Dogs that suffer from Hemorrhagic GastroEnteritis (HGE) will produce stool that is often referred to as looking like it's coated in strawberry or raspberry jelly. If your dog's poop looks like jelly with a reddish color, this means that he is producing diarrhea from the HGE that is mixed in with blood from the stomach and intestines. HGE can be caused by stress or your dog eating things he shouldn't have. A dog with HGE should be taken to the veterinarian right away for treatment. The good news is, while it appears serious, it most often can be treated fairly easily with hydrating the dog with IV or subcutaneous fluids, antibiotics and possibly a prescription diet or vet-approved bland home diet.

What You Should Do

It's never a good idea to ignore the presence of blood and/or mucus in your dog's stool since it can be caused by so many conditions that truly require treatment. If you find yourself in this situation:

Before Your Veterinary Visit

Once you've discovered your dog has blood in his stool, Dr. Megan Teiber, DVM says, "it is helpful to withhold all food and treats for 12 to 24 hours to give his system a break. Then feed a bland diet of plain, boiled chicken and white rice." She also suggests using probiotics "from a trusted brand that is made specifically for dogs." She cautions strongly against home remedies for blood in a dog's stool, "I do not find many other over-the-counter products or home remedies to be effective. Some human anti-diarrheal medications can even be harmful to dogs. If the stool is not back to normal after 1-2 days, or if your dog is vomiting, not eating, or lethargic, you need to bring him to a veterinarian."

Resist the urge to panic. Many conditions that cause blood and mucus in stools are reasonably easy to treat, such as worms and giardiasis. Even cases of parvo or corona can be managed with early detection. The key is to contact your vet right away before your dog's condition has a chance to deteriorate.