Australian Cattle Dogs are the superstars of the herding breeds. Keenly intelligent and incredibly tenacious, they are one of hardest-working breeds of all. These dogs make fantastic companions in the right setting, but they need a very active lifestyle or all that intelligence and energy will be funneled into destructive behaviors. Are you up for the challenge of living with one of these dogs?

Although each dog breed has its own look, Australian Cattle Dogs are very distinctive. Here are some of the highlights from the American Kennel Club standard.

The Australian Cattle Dog (ACD) is stocky with a body that is slightly longer than it is tall. The head is wide with dark brown, oval-shaped eyes and prick ears. The nose is black, and the bite is a scissors bite, which means the bottom teeth fit just behind the upper teeth when the dog's mouth is closed.

These dogs have dense undercoats and short, straight overcoats that make them ideally suited for enduring harsh weather conditions. Dogs referred to as "blue heelers" have either a plain blue coat or blue fur with mottling and speckles. They may also have black, tan or blue markings on their head. "Red heelers" have a red speckled coat, and they may have darker red markings on their head and body, although body markings are less desirable. 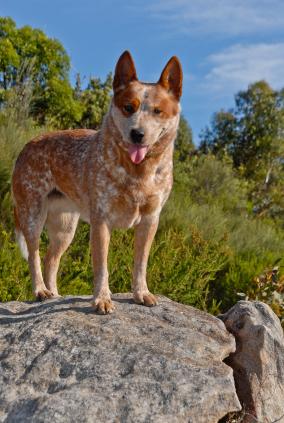 Cattle Dogs have very interesting personality traits that can sometimes be as exasperating as they are rewarding. A lot depends on how an individual dog is raised and kept.

This is an intelligent and active breed that requires a home that can provide a great deal of both mental and physical stimulation. As a working and herding breed, this dog will likely not be satisfied leading a sedentary lifestyle. This is a dog that loves to work and can become destructive if not provided with an outlet for its physical energy and mental dexterity. Unlike some dogs that are content with daily walks, the ACD needs to either work as it was bred to do or live in an environment that is stimulating.

This breed's nature is to be loyal, protective and attentive, which makes them ideal watchdogs. The loyalty of an ACD remains with their owner, and they may be wary or suspicious of strangers. Although completely obedient with their owners, they may show more independence with strangers.

Not the Ideal Companion for Children

ACDs generally do not do well with children. The exception are dogs that have been raised around children, which tends to make them more tolerant. Children should be taught to be respectful of these dogs because this dominant breed may display herding behaviors and nip at the heels of people in an attempt to herd them. These dogs need firm but fair training to ensure that they understand that their owners are the alphas in the household.

To say this breed needs a lot of exercise is an understatement. These dogs have an almost endless supply of energy, and they absolutely need positive outlets for it or they can wind up getting themselves into trouble. They need to be taken on daily jogs, and they appreciate games of fetch and Frisbee. Most of all, these dogs really need a job to do because this provides the kind of mental stimulation they crave. If at all possible, they should be allowed to herd livestock or take part in herding trials. 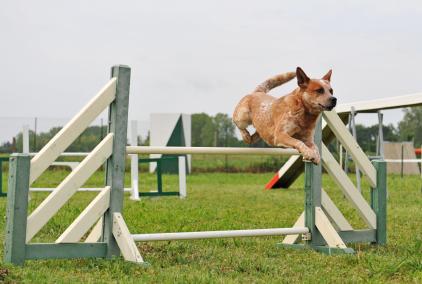 ACDs are "take charge" kind of dogs, so it's important to begin training them as puppies. Obedience training is a must because this puts the owner in the leadership position over the dog, and the training also promotes respect and teamwork between both partners.

Once basic obedience training is completed, don't stop there. Enter them in obedience trials, and let them collect their titles as they move up the ranks. In addition to obedience and herding, ACDs excel in sports like agility, tracking, flyball and rally.

ACDs don't require much grooming. They typically shed about twice a year, and they'll benefit from extra bathing during those times. Only bathe them when absolutely necessary, but do check the ears and clean them on a bi-weekly basis. The nails tend to wear down naturally if these dogs get proper exercise, but you can trim the tips if needed.

Overall, ACDs are one of the healthier breeds. However, there are still a few health issues every owner should watch for:

Origin of the Breed 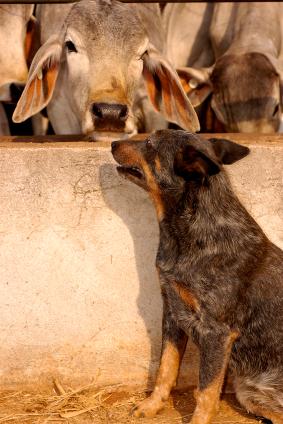 The ACD was developed in Australia in the 1800s by ranchers who were in need of a dog that had the stamina to work long hours in harsh conditions. There is a good deal of debate about which breeds contributed to the development of the breed, but according to the American kennel club these breeds included Dingo-blue merle Collies, Dalmatians and Black and Tan Kelpies.

Although the ACD has been around for quite some time, it wasn't until 1980 that the breed was officially recognized by the American Kennel Club.

A Wonderful Dog, but Not for Everyone

Although very loyal, Australian Cattle Dogs are not lap dogs meant to be kept strictly as pets. These dogs have energy to burn, and they are happiest when they can live on a working ranch doing the job they have been bred to do. If you have a lot of property and can give this dog all the exercise and mental stimulation he needs, this could be the breed for you. If you're looking for a couch potato that will cuddle and nap all day, you'll quickly find that this breed is simply too much dog for you.