One of the most frequent complaints dog trainers and behaviorists hear from new puppy owners is dealing with puppy biting. Many owners, especially ones new to dogs, interpret this behavior as aggression when more often than not it's a normal behavior for puppies. Puppy owners need to learn how to guide their puppies gently to more acceptable ways of interacting with people.

No dog owner dreams of bringing home an aggressive biting puppy. While nipping is a normal puppy behavior, once in a while an owner may find themselves with a puppy with true aggression issues. It's important to learn the difference between aggression and puppy mouthing and nipping. Although the normal behaviors of a puppy can be definitely unpleasant, it doesn't have to become a lifetime habit if you teach your pet that biting and mouthing skin is unacceptable.

What Is Normal Puppy Mouthing?

Since puppies don't have hands like humans, they use their mouths to explore their environment. If you watch a litter of puppies, you will see them mouthing and "biting" each other as part of play. Sometimes a puppy will bite down too hard, causing the other puppy to yelp or cry and move away. In this way, puppies teach each other what is acceptable. If a puppy is taken away from a litter too young, they lose this valuable socialization opportunity. Even puppies taken from the litter at an appropriate time will nip and mouth in their new homes as they are teething and learning about their new environment. 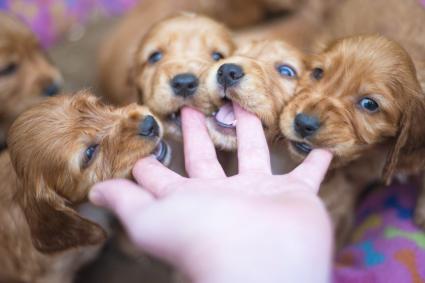 Signs of an Aggressive Puppy

When puppies mouth or bite their owners, this most often is just a normal behavior. However in some cases you can find yourself with a puppy that is actually demonstrating truly aggressive behaviors. This may be due to poor breeding and genetics, medical issues or the influence of environmental ones that lead to fear, frustration, or anxiety. Puppies that are undersocialized can also display aggression if they're uncomfortable around other dogs or people.

Work With Your Vet or Professional

In these situations, it's best to work with your veterinarian and a trained behavior professional to determine the cause of the aggression and work to alleviate it. It's critical to begin this behavior modification work right away as puppyhood is the time of a dog's critical developmental periods and what they learn, or don't, during these formative weeks and months can permanently affect their behavior for the remainder of their life.

In general, you will notice key differences in a puppy's demeanor and body language that can clue you in on what's normal behavior and what is concerning.

Because mouthing and biting is a natural behavior among dogs, it's expected that they will engage in this behavior in their new home. If you watch dogs playing, you'll see that they regularly nip each other and most dogs know not to nip too hard to hurt the other dog. However play biting can escalate if the dog becomes too excited or aroused and doesn't have good bite inhibition or impulse control.

Play biting can escalate into something painful when a pup becomes too excited or you engage in "rough housing." If your puppy comes from a breed with a stronger prey drive, such as a terrier, they may be more likely to get over-aroused during excited play and bite down too hard without intending to cause harm. In these cases working with them on bite inhibition and impulse control can alleviate the problem. You should also avoid overly excited play and try to find outlets for your dog's energy that work his mind and develop his self control skills.

In cases where the puppy is truly biting out of aggression, there are several reasons why this may be happening in addition to play biting getting out of hand. In these forms of aggression you may also see growling and snapping, as well as aggressive body language. Some more common reasons are:

Puppies may guard valued resources like toys, bones, their food or water dish or entries and exits. They may only do this to other animals, or to humans in the household. Resource guarding is actually an ingrained behavior that is exacerbated by fear and anxiety although sometimes it can also be passed on genetically which is why meeting the parents of a prospective puppy is so important. Resource guarding can also be made worse in puppies by punishment and inappropriate handling.

Puppies with fear aggression usually become this way because of either poor socialization, a genetic tendency inherited from one or both parents and/or a singularly traumatic experience at an early age. If not properly introduce to new things in the world like other dogs, people, places and noises, they can become nervous and afraid. These puppies will show aggression in a defensive posture because they are scared and want whatever is frightening them to go away.

Lack of proper socialization can also lead to territorial behavior in puppies. It may also occur as a natural behavior in breeds bred for guarding and protective instincts.

Some puppies inherit an aggressive disposition from their parents. In some cases this can be redirected through obedience training, behavior modification and lots of socialization. In others you should seek the help of a professional behavior consultant or veterinary behaviorist. 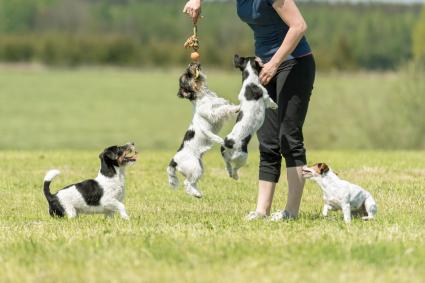 In the past it was believed that a puppy or adult dog displayed aggression due to the need to show dominance over his human owners or other dogs. Research has since shown this is incorrect and in many ways a problematic belief when it comes to handling aggression. According to associate certified applied animal behaviorist Katenna Jones, "Aggression is related to fear, anxiety or stress. One key to improvement is understanding the basis for the aggression, learning to spot and listen to early warning signs and finding appropriate ways to manage and redirect the behavior in a positive way." 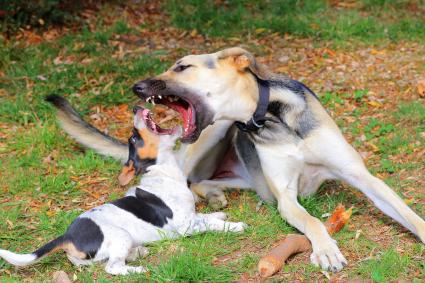 Whether your puppy is biting in play or because he's showing aggressive behavior, it's crucial to stop the biting before it becomes an ingrained habit. Explains Jones, "It all comes down to communication, listening to what the puppy 'is saying' and respecting that. We teach dog owners to manage the situation and provide positive alternatives to the puppy."

Teaching Puppies Not to Bite

In order to teach a puppy not to bite, he first has to understand what is expected of him.

Steps to Avoid When Teaching a Puppy Not to Bite

Unfortunately there is a great deal outdated advice that still exists regarding puppy training and behavior. Most of these are based on punishing the puppy for a natural behavior which can lead to fear and anxiety. They also are ultimately not effective because they don't teach the puppy what you want them to do instead of biting too hard. There are several traditional tips you should avoid.

Some owners use a firm "NO" when your pup tries to use his teeth on you. This may also include wraping your hand around his muzzle and say "No" in a loud, firm voice. Unfortunately doing this will teach your puppy that your hands are to be avoided and feared, and he may generalize this feeling to you as well. If anything it may cause the puppy to bite even more as he will want hands around his face and muzzle to go away.

A time out means confining him to his crate or gating him in another room. In theory this teaches him that he will not be rewarded with more attention when he bites. However, this can teach the puppy to dislike his crate or "safe room" because it is used as a punishment. It also doesn't show him what he needs to do to get rewarded. It's also very easy to for owners to get the timing wrong on a time out, and the puppy may miss entirely what he is being punished for. Jones also relates that she has seen time outs teach a puppy to "bite and run," creating a chase-me-catch-me game between you and the puppy which can end up reinforcing the behavior even more.

It used to be that dog owners were told to avoid a rousing game of tug-o-war because it will engage a more aggressive puppy to become over aroused and bite harder. Holding a toy just out of his reach can also encourage him to lunge for it and make him frustrated. However, tug can actually be a great outlet for a puppy's energy and a good way to teach him inhibition and impulse control, but only if you observe a set of rules for play.

Bitter Apple is a spray product that discourages dogs from chewing just about anything you spray it on. You can use it on your furniture, your carpeting, and even your hands. The problem with using Bitter Apple is that it again doesn't teach your dog what you want and some dogs aren't bothered by the taste at all. Putting Bitter Apple on your skin is also a recipe for ending up with it in your mouth and eyes and this is distinctly unpleasant. Think of getting on your tongue a milder form of pepper spray!

If you want your pup to modify his behavior, you also need to keep control of yours. This is one traditional tip that you should respect. Although the urge to give your dog a smack when he bites may feel like a natural reflex, avoid it at all costs. Hitting your dog will only feed into his aggression and his natural instinct to protect himself, and will in turn lead to more biting. It also will teach the dog to fear you and damage your relationship with him.

If you want to keep an aggressive biting puppy from growing up into a household menace the best course of action is to talk to your veterinarian and get a referral to a qualified behavior professional. If not handled properly with positive reinforcement and a modern understanding of dog behavior, a truly aggressive puppy can become worse as he or she becomes more fearful, anxious or frustrated. For the normal puppy who is expressing natural behaviors, working with the puppy to redirect him to more appropriate activities and reinforcing him for them, as well as getting him into a puppy socialization class, should lead to puppy growing out the behavior as he moves into adolescence and adulthood.