When do puppies stop growing? That's something many owners would like to know. However, this is a question that has more than one answer.

It used to be considered common wisdom that dogs stop growing once they reach one year of age. While that may be a fairly accurate statement in some cases, it does not hold true in others.

This misconception is largely due to the fact that many kibble manufacturers recommend that you only feed puppy kibble until your dog reaches one year of age. However, a puppy does not magically stop growing on the day of its first birthday.

If you make a comparison using breeds at both ends of the spectrum, it becomes apparent that all breeds do not grow at the same rate.

So, When Do Puppies Stop Growing? 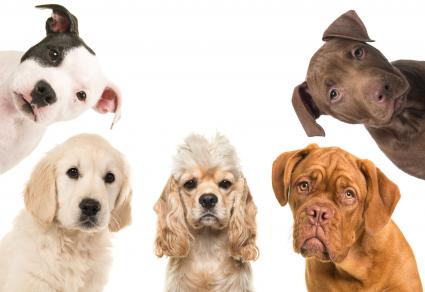 Although nutrition and living circumstances play a definite role in when puppies stop growing, each puppy is an individual and may grow at a slightly different rate than other members of its breed or even from its own litter. On average, you will see the fastest growth in puppies in the first four to five months of age. Still, a few generalizations can be applied to dogs that fall into basic size categories of small, medium and large breeds. You can tell the approximate size of your puppy based on breed averages as well.

Most small dogs will reach their full body frame size by approximately one year of age. 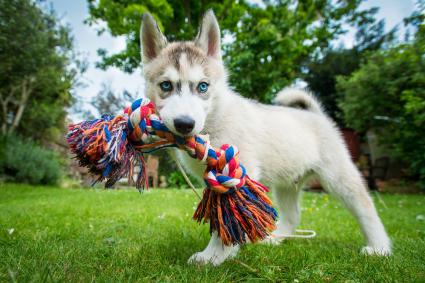 In general, most medium size breeds will reach their full adult frame size between 12 and 15 months old. Breeds with stockier bodies may take as long as 18 months of age for their weight to catch up to their frame size.

Large breeds take the longest of all to reach their full size. Their frames typically keep growing until they are between 18 months and 24 months of age while they may be anywhere from 24 to 36 months old before they reach their full adult body weight.

Puppies will reach their full height depending on their breed size group.

Like height and weight, a dog can be considered mature based on their size grouping.

How Old Is My Puppy?

Most often adopters from a rescue will bring home dogs where the exact age is not known. If this is the case with your puppy, your veterinarian can look at their teeth to give you a close approximation of their age.

Expectations for Your Own Puppy

As you can see, it's difficult to pinpoint an exact answer to the question "When do puppies stop growing?" The best you can do is compare your own puppy's expected size, based on his breed heritage, to the examples given above. Watch him carefully as he nears adulthood, and you'll eventually notice that he hasn't grown any larger for several months. At that point, it's safe to assume he has finally stopped growing.

3
Comments
© 2006-2020 LoveToKnow, Corp., except where otherwise noted. All Rights Reserved.
When Will My Puppy Stop Growing?