One of the most popular breeds in the U.S. according to the American Kennel Club, the Vizsla is a stunning dog. It's hard not to see why with their sleek, athletic build, lovely red coat, intelligent personality and friendly expression.

The Vizsla began as a breed in Hungary centuries ago and it's possible they first came to be back in the 9th century. They were originally developed as hunting dogs by the Magyar tribes found in Hungary. The name Vizsla has several meanings in Hungarian including pointer, retriever, and deerhound. Vizslas first came to the U.S. after World War II and were officially recognized as a breed in 1960 by the AKC.

According to the Vizsla Club of America's breed standard, males should be about 22 to 24 inches high and females 21 to 23 inches. These are muscular dogs with a lean, powerful frame designed for speed and endurance during hunting expeditions. They have long ears, tapered noses and square muzzles. The males weigh about 50 pounds and 45 pounds for females. 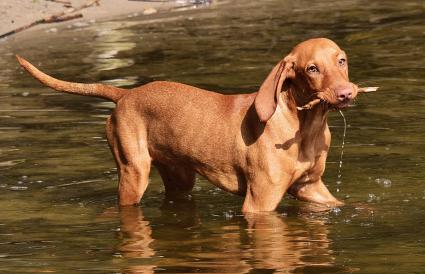 Vizslas can easily be recognized by their distinctive golden rust coat color and brown eyes and noses. Some variations include a dark mahogany or yellow color but these are disqualified under the club standard. Some may also have a bit of white on their chest or toes, which is acceptable but white anywhere else on the dog and black noses are not. Their coat is short and dense and they are low-to-moderate shedders. Regular grooming is easy with just a brushing once or twice a week and baths as needed. There is also a type of Vizla known as the Wirehaired Vizsla with a thick, wiry coat but this dog, though very similar, is a separate breed from the Vizsla.

Vizslas have been nicknamed "Velcro Vizslas" by their fans because of their penchant for being very affectionate and close to their owners. This can put them at risk of developing separation anxiety so puppy owners should work on socialization and teaching their Vizsla it's ok to be alone from an early age. Early socialization is also important as some Vizslas can be shy with strangers. Because they are active and intelligent dogs, they can become destructive if they are not given plenty of mental and physical stimulation.

Vizslas are generally friendly dogs who do well with children and can live with other dogs. Since they were bred to hunt small animals, they may not be a good fit in a household with smaller pets although they some members of the breed can live well with cats, especially if raised with one. 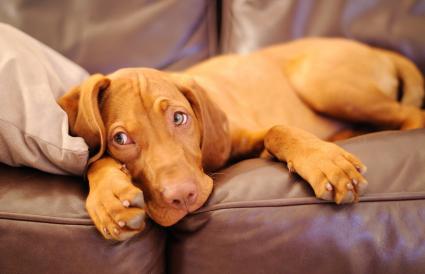 These are not dogs for sedentary owners as they were bred to perform in the field by pointing and retrieving game. They need a lot of exercise and are a great choice for someone who loves jogging or hiking. While having a fenced-in yard that they can run and play in is a big plus, they would do best in a home where they get a dedicated long walk or jog daily. Playing fetch is also an excellent exercise choice for them as they are excellent retrievers. Vizslas also love water and swimming is a wonderful energy outlet if you have a pool or a lake or ocean nearby. 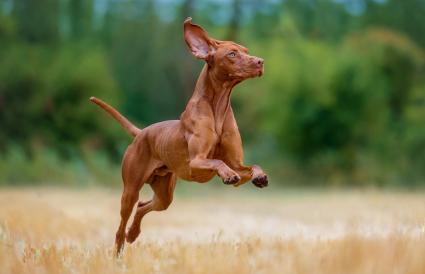 Their intelligence and desire to work with people makes Vizslas an excellent training partner. They do best with positive reinforcement training should start as soon as possible. They can get easily distracted, especially by movement and small animals, so working with them on attention and focus from the start can be a great help as they reach adolescence and adulthood. Vizslas are prized as versatile hunting dogs but they also are popular with all types of dog sports such as agility, scent work, obedience competitions and dock diving. 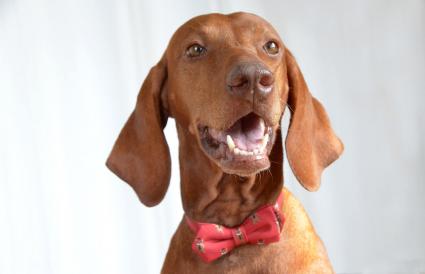 Vizslas are generally healthy dogs with an approximate lifespan of 12 to 14 years. In terms of their health there are a few conditions that are known to afflict the breed.

Where Can You Get a Vizsla?

If you decide to purchase a Vizsla puppy from a breeder, expect to pay around $1,000 to $2,000 with a median price around $1,075. You can find breeders through the Vizsla Club of America website which also provides helpful information you can use to interview breeders. The AKC PuppyFinder is also a source of breeder referrals. If you prefer to rescue a Vizsla, the Vizsla Club of America has a list of regional rescue contacts who can help you find dogs up for adoption. 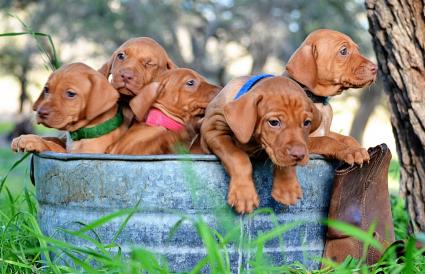 Is a Vizsla the Right Dog For You?

Vizslas make wonderful, affectionate companions who are just as happy snuggling up as a lap dog as they are going for a long run with you. They are great family dogs but definitely need training, early socialization and an active, engaged owner who will provide them with the exercise and mental enrichment they need to be happy, healthy dogs.