The big fluffy white dog with the big smile is unmistakable for any other breed. The Samoyed, or "Sammie," is loved for their friendly, loving personalities and bountiful white coat.

History of the Samoyed Breed

The Samoyed is one of the oldest breeds of dogs in the world. They get their name from the Samoyede tribe found in Asia and Siberia. The dogs were developed to assist with hunting reindeer, as well as guarding and herding them. They also pulled sleds for the nomadic tribes. Another important role of the Samoyed was to keep their humans warm by cuddling with them at night in their tents to stave off the frigid cold temperatures. The Samoyed breed came to England in the 1800s and the breed was promoted by Queen Alexandria who had received one as a gift. They were recognized by the American Kennel Club in 1906 which is the same year they first arrived in the U.S. They became popular as both a pet and a sledding dog in the 1900s, and they continue to serve in both roles today.

The Samoyed is a medium-sized dog weighing between 50 and 60 pounds. They are a spitz breed and have the common "look" of these dogs, with erect, triangular ears, a medium-sized snout, fluffy plumed tail and a compact, athletic frame. Their eyes, nose and lips are all black which stands out against their pale fur. They are known for the "Samoyed smile" and an intelligent, welcoming expression.

The most distinctive feature of the Samoyed is their brilliant white double coat. Their fur is thick and designed to resist the coldest climates. The outer layer is straight and rough while the undercoat is soft and wooly. While white is the color most commonly associated with the Samoyed, they also can come in biscuit or cream, or a mix of white and biscuit. This is a heavy shedding breed and require a brushing at least once a day to keep their fur healthy, mat-free and shedding under control. If you don't like dog hair everywhere, the Samoyed is not the dog for you! However, they are a breed known for not having much odor so that's the upside to the effect of their heavy shedding in your home. 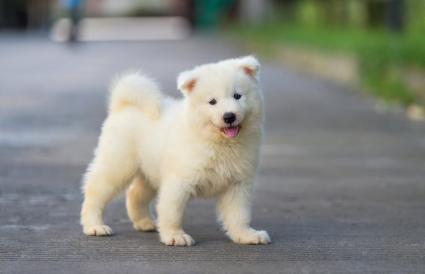 The Samoyed is a wonderful companion who makes an excellent family dog. They love everyone they meet and despite their size and strength can be very gentle with young children. Like other Northern breeds, the Samoyed can be very "talkative" and will howl, whine and bark to let you know what he's thinking. They also can be destructive if bored and not given enough to do. They do well with other dogs but they may not be a good choice for homes with small pets and cats as they have a high prey drive.

Exercise Needs of the Samoyed

Since the Samoyed was created to be a working dog, they need a decent amount of daily exercise to keep them from becoming destructive. They're a good fit for joggers, runners, hikers and people who enjoy winter sports with dogs like skijoring. However, if you live in a warmer climate, you may need to work the dog's daily exercise schedule around the weather as they can be susceptible from overheating because of their thick coat.

The Samoyed is a very intelligent dog and needs positive reinforcement and consistency for successful training. Though they can be described as stubborn, this is simply a dog that's been bred to think for himself and needs an owner who can keep up with him. They are a good choice for dog sports activities like agility and competitive obedience. Their loving, gentle temperaments also make them great candidates for therapy dog work. 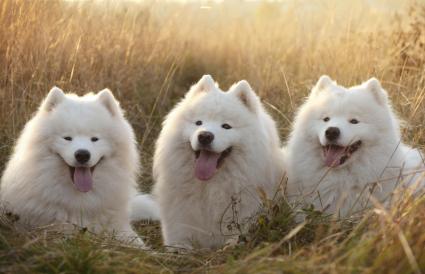 The average lifespan of a Samoyed is about 10 to 12 years. The Samoyed is a fairly healthy dog with a few medical conditions known to be common with the breed. These include:

Getting a Samoyed Puppy

The best place to start looking for a purebred Samoyed puppy is through the Samoyed Club of America. A listing of breeders and clubs can be found on their site. The SCA cautions potential owners to make sure breeders test their dogs for commonly found disorders of the eyes, hips and heart. Expect to pay around $675 to $1,500 for a purebred puppy. 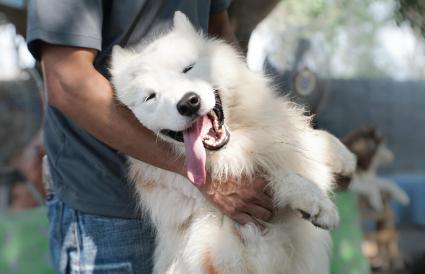 If you would like to rescue a Samoyed, the SCA's website has a listing of the Samoyed rescue groups around the United States. You can also search for Samoyeds in public shelters and all breed rescue groups using the Petfinder and Adopt-a-Pet websites. Many Samoyeds end up in rescue due to their exercise needs and grooming regimen, so make sure you're prepared to take in an adult Samoyed before rescuing.

Is the Samoyed the Right Dog For You?

The "Smiling Sammie" is a wonderful dog that's a perfect companion for just about anyone who can provide it with the home it needs. While they are loving, affectionate and sharply intelligent dogs, they do need regular exercise beyond just a daily walk around the block. They also need consistent, positive training and a dedicated daily grooming routine. For the right person or home, they can be a great dog but can be overwhelming for more sedentary lifestyles without the time for caring for all of their daily needs.