If you're a "big dog" person but need a smaller dog because of your living situation, a Pomsky might be the dog for you. These adorable fluffy dogs have all the personality of a large athletic dog in a small package.

The Pomsky is a dog that grew out of the "designer dog" breed craze. It's a cross between a Siberian Husky and a Pomeranian. The breed is not recognized by any of the major breed registries like the American Kennel Club. Currently, the Pomsky Club of America has set out a code of ethics with "approved breeders" dedicated to promoting responsible breeding practices. There is also the American Pomsky Kennel Club, a non-profit organization which seeks to get AKC recognition for the Pomsky through organizing a pedigree database and also adding the American Eskimo dog into the breed mix. The APKC is currently on hiatus, however.

Since the Pomsky is a hybrid breed that is still fairly new to the dog world, there will be variations in the size and look of individual dogs. Some may look more like their Pomeranian parents and others more like their Siberian Husky parent. Their size range can be anywhere from seven to about 40 pounds. Some breeders are even producing a "Teacup Pomsky" which is the smallest possible size with this breed mix, which is around the seven pound range. They are also referred to as a Miniature Pomsky, Toy Pomsky or Pocket Pomsky.

Some Pomskies will have thicker, fluffier fur like a Pomeranian whereas others will have a shorter coat like a Husky. Whether it's longer or shorter, the coat will be a double coat and you can expect a lot of shedding. A Pomsky will need regular brushings a few times a week to keep their fur healthy and reduce shedding. The Pomsky coat can be any of the colors and patterns found in the parent breeds, which can be:

Temperament of the Pomsky

The Pomsky temperament will vary from dog to dog based on the parents. In general they tend to have the funny, outgoing personality of the Pomeranian with the independent streak of the Siberian Husky. They also tend to be a loud dog, having both the Pomeranian's gregarious barking nature and the Siberian Husky's penchant for howling. They are known for being friendly with people, though some can be shy with strangers and early socialization is a must for this breed. They may do well with children if raised with them, but there's a chance they may find toddlers and very young children intimidating. They can get along well with other dogs but if they inherit the husky prey drive, you may not be able to acclimate them to a home with cats and small pocket pets. 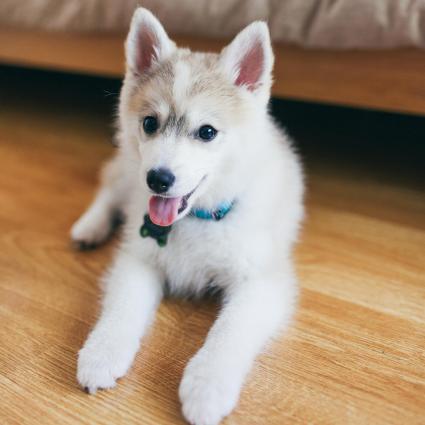 The Pomsky is a dog that needs regular daily exercise but not to the level of their Siberian Husky heritage. They're a good choice for someone who lives in an apartment and wants to take their dog for a walk twice a day but doesn't want to have a dog that needs to go running or jogging daily to be happy. They are also very intelligent dogs and exercise should not be only limited to the physical. Training and a variety of toys, especially interactive toys, can give them the mental outlets they need to work their brains. These are great dogs to teach tricks to and they can be excellent candidates for dog sports like agility, scent work and competitive obedience.

Since they're still a new breed, there's not enough of a history to know what the common health problems of the Pomsky is. It's estimated that their lifespan is about 13 to 15 years. It's possible that they will be affected more often by conditions that affect the parent breeds, which includes: 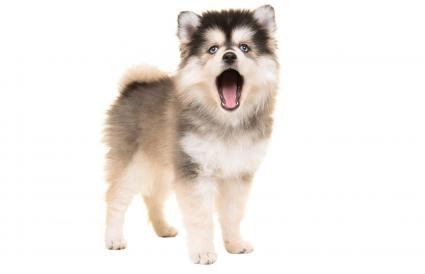 Where Can You Get a Pomsky?

If you decide to get a purebred Pomsky puppy, you can look for breeders through the Pomsky Club of America website. It's important to be cautious when looking for breeders online as popular designer dogs often lead to unscrupulous breeding practices. Research your breeder carefully and ask for references from previous owners. The breeder should also want to ask you questions about whether you are a suitable home. Because of the size difference between the Pomeranian and Siberian Husky, Pomskies are produced through artificial insemination. As a result, expect to spend at least $2,000 on a puppy but more likely prices will be in the $3,500 and up range.

Is the Pomsky the Dog For You?

Pomskies are definitely adorable dogs, whether they are fluffy and small like the Pomeranian or a bit larger like the Siberian Husky. They are a great choice for people who live in smaller spaces like an apartment or condo but love the look and personality of a Siberian Husky. However, the downsides to the breed is that you won't know for sure what the temperament and final adult size of your puppy will be, and they are considerably more expensive than some other breeds.