The Lhasa Apso is a popular small dog, prized for both its looks and its silly, loving attitude with its people. They can be more difficult around strangers and younger children, and despite their small size they can have quite the "attitude." They also are not a low maintenance breed although they're cherished by owners who enjoy having a dog they can groom and style in a variety of ways.

History of the Lhasa Apso Breed

The Lhasa Apso is an ancient breed that has existed for at least a thousand years. They were bred to serve as guard dogs for the monasteries in the Himalayan Mountains, home of the Dalai Lama. "Lhasa" comes from the name of the capital city of Tibet. "Apso" may be related to the word "abso" which comes from their original name, "Abso Seng Kye," which means "bark lion sentinel dog." The lion symbolism has meaning to the breed as the Tibetans believed in a mythical beast, the snow lion, which was the guardian of all of Tibet. The breed was brought to America in the 1930s by world traveler Charles Suydam Cutting who was gifted some dogs by the Dalai Lama himself. These dogs were used to develop the breed in the U.S. and they were the first Tibetan breed recognized by the American Kennel Club in 1935.

The Lhasa Apso is a small dog, weighing about 13 to 18 pounds. Males are slightly taller, measuring at 11 inches, than females who are usually around 9 inches at the withers. Their bodies are longer than they are tall. They have a tail that curls up, twists and hangs over their backs. Their heads are rounded with a narrow skull shaped somewhat like a dome and a short, but not brachycephalic, muzzle. They have small rounded ears that fall downward.

The most distinguishing physical feature of the Lhasa Apso is their straight, heavy coat. Abundant hair can be found on their long feathered tail, ears and over their eyes. Their coat on their head, chest, body and legs is long and luxurious and at full length extends to the ground. The coat is a hard double coat that was designed to keep these dogs warm in the cold Tibetan climate. The Lhasa Apso's coat, which is made of hair instead of fur, is not hypoallergenic, though it's possible some people with allergies tolerate it more than fur. The coat can come in just about any color but the most common ones are black, black and tan, brindle, brown, cream, fawn, golden, gray, grizzle, parti-color, red, red gold, sable, silver and white. 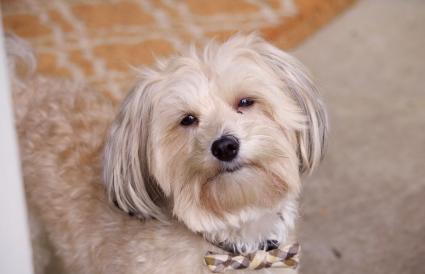 The Lhasa Apso is definitely not a low maintenance dog when it comes to grooming. If you want to own a Lhasa, there's some tips you should be aware of before you bring one home.

The Lhasa Apso has a fierce but loving personality. With their families they can be playful, affectionate and even downright silly. Yet these same dogs will be right out front to tell strangers to leave and they take their guard dog duties seriously. Barking is definitely a tendency of the breed, especially when they feel the need to alert the household. While they are devoted to their people, they also are confident dogs that can handle being alone. They can live with other dogs and pets, especially if they are raised with them. They have been known to get into squabbles with other dogs so you should be aware of this if you want a multi-pet household. 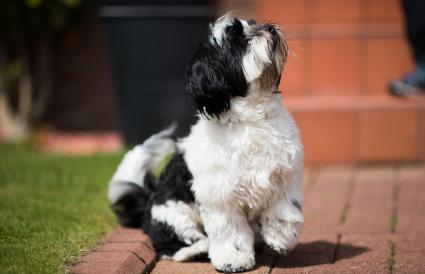 Is the Lhasa Apso a Family Dog?

While the Lhasa Apso can be loving and affectionate with children, they generally are not the best choice for a home with small children. They are known to nip at toddlers and younger kids who don't understand how to interact properly with a dog. They also do not appreciate a lot of noise and rapid movement and activity, so a boisterous home full of kids isn't going to be a Lhasa's best environment.

The Lhasa does not have excessive exercise needs, and this makes them great dogs for people in apartments and condominiums, as well as seniors and people with less active lifestyles. A good 10 to 20-minute walk a day is enough to keep most Lhasas happy. They will enjoy playing with you as well, but they're just as happy to hang out with you on the couch.

Because Lhasa Apsos have a very intense personality, there's definitely some tips a Lhasa owner should employ when they bring one home. 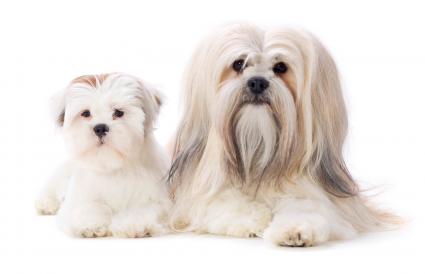 The average lifespan for a Lhasa Apso is about 12 to 15 years, although the oldest Lhasa on record lived to age 29. There are several health problems that are commonly found in the breed.

Getting a Lhasa Apso Puppy

If you're planning on getting a purebred Lhasa Apso puppy, the average price for a "pet quality dog will be around $900 to $1,300. Puppies from champion show lines will cost more depending on the breeder. You can look for breeders through the American Lhasa Apso Club. Make sure that you interview your breeder carefully and ask to meet the parents of the litter. Because of the breed's more intense personality traits, you want to ensure they're breeding for excellent temperament and health and are providing socialization as well. 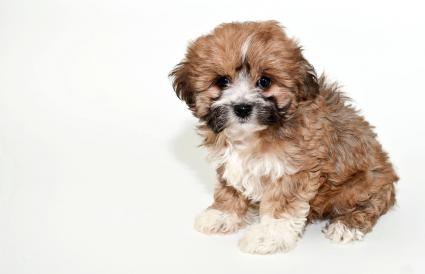 If you decide you'd prefer to rescue an adult Lhasa Apso, the national breed club has a website with resources for dogs needing homes across the U.S. You can also find Lhasa Apsos in local rescue groups and shelters using the Petfinder and Adopt-a-Pet websites. Since they are not a rare breed in the U.S., it's not hard to find dogs in rescue. Since these dogs are naturally hesitant around strangers, make sure you take the time to meet any prospective dogs needing homes and get as much information on them as you can. Some dogs may have a harder time than others acclimating into your home if you already have other pets and especially if you have young children.

Is the Lhasa Apso the Right Dog For You?

The Lhasa Apso is a fierce little lion of a dog that can be an excellent companion in the right home. They're a great choice for small apartment living and quieter lifestyles. While they can do well with families, they are a more challenging dog to own with small children. They also require a lot of grooming, even if you decide to go with a regular puppy cut. When considering the annual cost to own one, you should factor in the expense of grooming products and supplies as well as professional grooming sessions.