The Havanese is a lovely small dog that combines a sweet, affectionate nature with an active and energetic side. They're the perfect canine companion for someone who wants a "big dog" personality and energy level in a small dog package.

Origin of the Havanese Dog Breed

The Havanese hails from Cuba and is known by several names, including the Bichon Havanais, Havana Silk Dog, White Cubans, Spanish Silk Poodle, Havana Spaniel and Habañeros. They are believed to be descended from the Bichon and Maltese breeds brought to Cuba by merchants from Spain and Italy in the 1700s. The breed slowly began to die out in Cuba after the 1959 revolution. Cuban refugees brought the breed to the U.S. These American Habañeros eventually developed into the Havanese breed which was recognized by the American Kennel Club in 1999.

The Havanese is a toy breed, weighing about seven to 13 pounds when fully grown. Though they're small, they are not fragile. They have short legs, a long body and a round, friendly face with drop ears and intelligent eyes. Their plumed tail is long and curls over their back. One of their most striking physical characteristics is their gait, which is playful and bouncy. 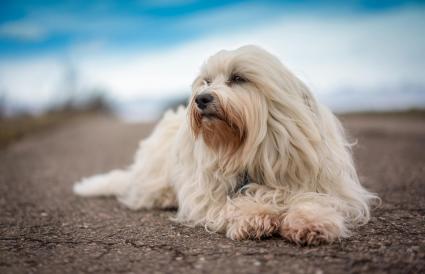 The Havanese has a long, silky double coat. The coat should appear wavy or fluffy with some movement rather than hanging flat along the dog's body. The coat comes in almost every color with the most common being:

Grooming and Caring for the Havanese Coat

Some Havanese owners like their dog's coat to be corded, which it will do on its own, although some dogs may need to have their hair "trained" initially to cord. The amount of grooming involved depends on whether you keep their coat long and full or trim it short. You will need to brush them daily and bathe once a week for a full, long coat. A dog with trimmed short hair can be bathed biweekly and will need to be trimmed every few weeks but requires overall less maintenance. One of the nice qualities about the Havanese's coat is that while it does require some effort, they are a low-shedding breed. While no dog is hypoallergenic, the Havanese is preferred by many owners who have allergies because their hair is less irritating to them, although each individual person will have different results with a Havanese. 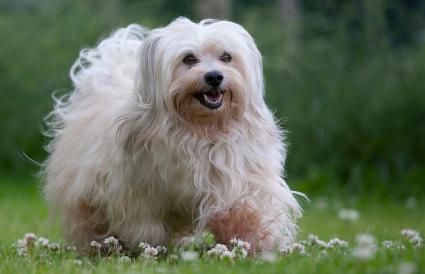 The Havanese is a great option for a family dog as they have a lot of energy but not excessively so. They enjoy playing with children and will love going out for their daily walks, but they're not so energetic that their needs will be overwhelming. The breed does require early socialization as some dogs can be shy and they can also attach too closely to their people, leading to separation anxiety. This can include barking, destructive behavior and house training problems if their anxiety becomes too much for them. The Havanese can also be very vocal, although training them and providing them with mental and physical outlets can help with this barking trait.

The Havanese temperament makes them popular with dog sports enthusiasts who enjoy the breed's small size coupled with the intelligence and enthusiasm. They excel at events like agility, trick training and competition obedience. Their love of people and smarts also make them great candidates for therapy dog work. One of the training issues common to the Havanese is trouble with house training, which can take longer than with other breeds of dogs. Training with a Havanese puppy should start right away and focus on house training, crate training and early and frequent socialization. You should also work as soon as possible on acclimating them to being calm when alone in order to prevent future problems with separation anxiety. 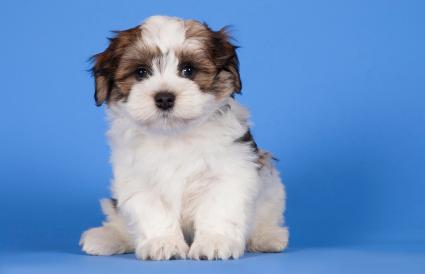 The Havanese has a lifespan of about 14 to 16 years. They do have some common health problems that potential owners should be aware of. These include:

Where Can You Get a Havanese?

A purebred Havanese puppy will cost between $800 to $1,200 though you can expect to pay more for a dog from champion show lines. The best place to start looking for a Havanese breeder is through the Havanese Club of America (HCA). The club maintains a breeder directory as well as a thorough breakdown of which health tests you should ask about when interviewing a breeder. 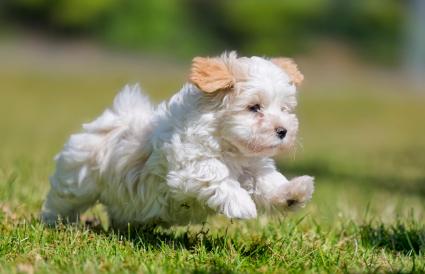 If you prefer to find a Havanese up for adoption, the HCA supports Havanese Rescue Inc. This group lists dogs for adoption around the U.S. You should also use the Petfinder and Adopt-a-Pet websites to find dogs in shelters and rescues near you. Contacting breeders may also help as some breeders may know of current owners who have a dog they need to rehome. You are not likely to find many Havanese purebred dogs in rescues, but it is possible if you're willing to be patient.

Is the Havanese the Right Dog For You?

It's no wonder the Havanese has increased in popularity over the years since it was first accepted by the AKC. These dogs have exuberant, affectionate personalities and make active companions for the person or family who wants a small dog that enjoys playing and going out as well as cuddling at home on the couch. They can be hard to house train and it's imperative to work on shyness and prevent anxiety from the start. They also can be a bit more work as far as maintenance if you choose to keep their coat long or corded, but the adorable, outgoing personality of the Havanese makes the job worth it!