The Dogo Argentino is a striking and imposing dog with a strong personality to match. These dogs are not for everyone but make excellent canine companions in the right home environment.

Origin of the Dogo Argentino

The Dogo Argentino is also known as the Argentine Dogo or Argentinian Mastiff, or just simply as the "Dogo" by its fans. The breed was developed from the Argentinian Fighting Dog of Cordoba which no longer exists today.

Bred for Hunting and Guarding Abilities

In the 1920s a breeder in Argentina, Dr. Antonio Nores Martinez, took these fighting dogs and crossbred them to other breeds to create a dog that would make an excellent big game hunter and guard dog without the tendency toward inter-dog aggression. Some of the breeds used to create the Dogo Argentino include the Bull Terrier, Great Dane, Irish Wolfhound, Pyrenean Mastiff, Spanish Mastiff, and English Pointer. The breed became popular for its excellence in pack hunting large game like peccaries, wild boars, mountain lions and pumas.

The Dogo in the US

The Dogo came to the U.S. in the 1970s and the Dogo Argentino Club of America was created in 1985. Currently it has recognition in the miscellaneous class with the American Kennel Club in the Working Dog group and is working toward becoming a fully recognized breed.

The Dogo is a large dog, weighing between 80 and 100 pounds. They have a muscular frame that stands between 24 and 26-1/2 inches high when measured at their shoulders. They have big blocky heads, a strong muscular neck and their medium-length ears are often cropped by breeders. Their bodies should be a bit longer than they are tall and overall give the appearance of a strong, capable dog built for protection and athleticism.

Coat and Grooming of the Dogo Argentino

The Dogo's coat is short and completely white. They may have a small black patch on their head, on an ear, or around an eye and still meet the breed standard. Their nose and lips are black and their eyes are rimmed with black as well. They do shed and will need regular brushing to control shedding it, and baths as needed to keep them clean. Some people consider the breed hypoallergenic but there is no evidence to support this. They are also known to drool and you'll need to be prepared for cleaning up after them. 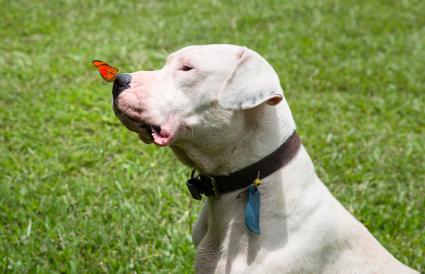 Is the Dogo Argentino a Pit Bull?

There's no doubt that the Dogo Argentino looks very similar to the "pit bull breeds" American Pit Bull Terrier and American Staffordshire Terrier, as well as the American Bulldog. Though there are some common descendents in all of these dogs' bloodlines, the Dogo is not considered a pit bull breed. These breeds do have much in common, including a powerful, muscular body with a short coat and blocky head. In terms of temperament, the Dogo is more suspicious of strangers and is prized as a guard dog. They also are a bit more stoic and serious than the pit bull breeds.

Breed Bans and the Dogo Argentino

The Dogo Argentino is banned in a few countries, including Australia, the Cayman Islands, Denmark, Fiji, Iceland, Singapore, the Ukraine and the United Kingdom. They can be caught up in breed bans in some areas of the U.S. since they are often mistakenly considered a pit bull breed.

The Dogo Argentino has a strong personality and they are hard-working, intelligent dogs. This is a breed that was developed to work and it needs regular stimulation to keep their minds and bodies occupied. Otherwise they can become destructive from boredom. Their work ethic, intelligence and drive makes them popular choices for military, police and search and rescue work in their home country. They are known to be extremely loyal and protective of their owners. They are also very affectionate and playful with their humans. They can do well with children if raised with them but there can be a concern with the Dogo and small children. They also are known for having a very strong prey drive and may not be able to live with small pets like cats or even smaller dogs. 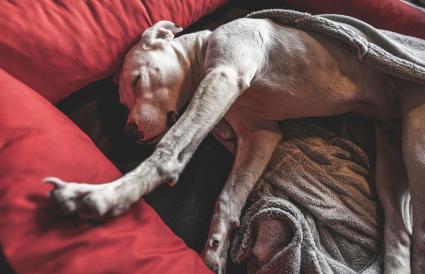 The Dogo requires an owner who can provide them with a lot of physical and mental enrichment. They will not do well in a home where they're expected to lounge around all day. Some great ways to exercise them in addition to running and jogging are dog sports like agility and weight pull. They also can be a great choice for scent work, as they were bred to have a very developed sense of smell to assist with hunting. Providing them with food-stuffed toys can keep their minds active during meal times and they will need plenty of heavy duty chew items to keep them from destroying items in the house.

Early and frequent socialization and training in an absolute must with this breed. Because of their tendency to be protective and wary of new people, you need to socialize them as much as possible as a puppy to prevent future problems as an adult. Training needs to be consistent and positive and you definitely want to involve the whole family if the dog is living in a multi-person home. The Dogo is fiercely intelligent and can excel at just about anything you train him to do, whether it's dog sports, competitive obedience or just being an excellent canine companion.

The Dogo Argentino has an expected lifespan of about 10 to 12 years. There are a few medical conditions that are endemic to the breed:

Getting a Dogo Argentino Puppy

Because this is a serious breed that needs an educated owner, you want to make sure you research your breeder carefully. A well-bred Dogo Argentino puppy from a responsible breeder will cost around $2,000 with dogs from special hunting and show lines selling for as high as $4,000. You should make sure that the breeder does testing for hips and BAER testing for deafness and breeds for excellent temperament. A good first step for finding a breeder is through the Dogo Argentino Club of America. 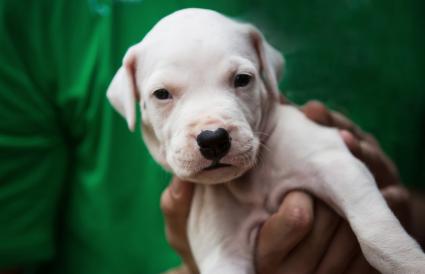 If you want to rescue a Dogo, you can contact Dogo Argentino Rescue which is based in Florida but assist dogs all over the U.S. You can also search for them in all-breed rescues and shelters using Petfinder and Adopt-A-Pet. Keep in mind, some groups may list a white pit bull breed as a Dogo by mistake, so if you find a dog listed as a Dogo you may need to investigate them further to make sure it is one.

Is the Dogo Argentino the Right Dog For You?

The Dogo Argentino is an impressive dog with many excellent qualities. However, they are not a good choice for a new dog owner or someone looking for an "easy" dog. These dogs are serious and need an owner willing to provide a lot of daily exercise, interaction and enrichment and be sure to socialize them from the start. They are also powerful dogs and need someone able to handle a dog of this size, strength and drive.