The Doberman has a fearsome reputation as a guard dog and military dog. Despite this reputation they can be intelligent, loyal companions who excel in many sports and can be surprisingly playful and affectionate.

The Doberman hails from Germany and was developed in Germany in the late 1800s. The breed is a mix of Manchester Terrier, German Pinscher, Beauceron, Rottweiler and Weimaraner. They were recognized as a breed by the American Kennel Club in 1908. They were popular dogs for military work during World War II. though they are not used as much today as war dogs. They were also used frequently in the past as police and personal protection dogs and currently as search and rescue and service dogs.

Dobermans are powerful, intimidating dogs with a dignified and serious stance that can deter strangers. Though many people are familiar with the cropped ear look, Dobermans are actually born with long, floppy ears. Males are 26 to 28 inches high and females are 24 to 26 inches high. The males are heavier than females, coming in at 75 to 100 pounds and females at 60 to 90 pounds. They have a muscular, athletic frame, a long snout and naturally long tails although these are often cropped. 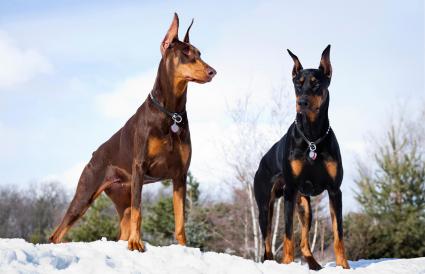 The Doberman has a short, shiny coat that is easy to care for. Grooming should involve a brushing a few times a week and the occasional bath as needed. Their coat colors has rust on their legs and paws, on the chest, muzzle and above the eyes. The rust color is paired with either black, blue (also called gray), fawn or red which is also called chocolate or brown. White Dobermans can occur which are dogs that are albinos and breeding them is discouraged as they can have several serious health and behavior problems due to their condition.

People who aren't familiar with Dobermans can regard them warily because of their rumored aggressive temperament. While a Doberman can be an excellent guard dog and will protect his family, they can make wonderful family dogs who are known for their loyalty and attachment to their humans. They can get along well with other dogs and pets and even with young children despite their size. In fact they can become anxious if left alone, and it's important to work with young puppies to keep them from developing separation anxiety. 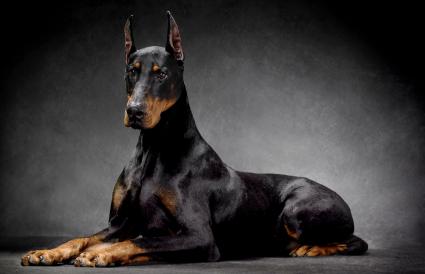 Since Dobermans were bred to be working dogs, they need a lot of mental and physical stimulation to keep them from developing behavior problems. They are not a good breed for sedentary owners. They need daily long walks or jogs and providing them with interactive toys can help them keep their brains occupied. Training and dog sports are also activities that can keep their energy focused.

Dobermans are very intelligent dogs who can excel at any task with positive reinforcement training. It's important to get them socialized early as puppies because of their adult size. You also want to start training them at a young age so you can manage their more protective aspects as adults. Dobermans are an excellent candidate for just about any dog sport from agility to competitive obedience. Their intelligence and athleticism makes them a versatile breed who can be found working as service dogs, search and rescue dogs, and therapy dogs.

Dobermans live approximately 10 to 12 years. They have several conditions that are found often in the breed:

Where Can You Get a Doberman?

Buying a Doberman puppy from a breeder will cost you approximately $1,500 to $2,500. The Doberman Pinscher Club of America's website has a breeder referral directory. The AKC Marketplace is also a good source of breeders. 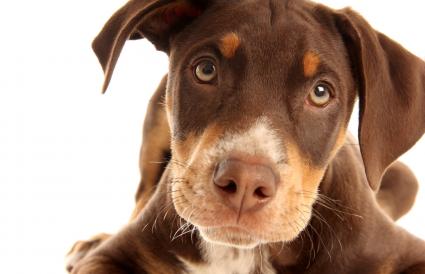 Dobermans can be found in breed specific rescues as well as all-breed shelters. Some breeders may also have older dogs to place and many foster for rescues as well. The Doberman Pinscher Club of America has a rescue directory on their website that provides contact information by state.

Is the Doberman the Right Dog For You?

Dobermans are beautiful, athletic canines that are fiercely intelligent and loyal companions. They are not the best choice for an owner not willing to provide daily exercise and spend time training them. For the right home, they make excellent family dogs who are fiercely protective yet loving and affectionate.