The Belgian Malinois is an impressive, fearless dog that is prized for military and working dog jobs. Their intelligence and athletic ability makes them a perfect choice for active duty and in the right home, they can be an excellent family pet.

Origin of the Belgian Malinois

Although the Belgian Malinois is often associated with military and police work, the breed actually began as a sheep herding dog. They were developed in the 19th century in the Malines region and are one of four Belgian shepherds that were bred for herding, each with a different coat type and named for an area of Belgium. They came to the U.S. in the early 1900s and originally were considered the same breed as the Belgian Tervuren and the Groenendael or Belgian Shepherd. In 1959 they were split into three breeds, each of which is recognized by the American Kennel Club in their herding group.

A History of Service

In the past few decades Belgian Malinois dogs have become a critical part of military teams, and a member of the breed took part with Seal Team Six in the infamous raid on Osama Bin Laden's compound. More recently, a Belgian Malinois was in the news for playing a part in the 2019 raid against Abu Bakr al-Baghdadi. The breed has become so strongly associated with its role in the military that a life size bronze statue in Fayetteville, North Carolina, to honor dogs who have died in Special Operations Forces since September 11, 2011, features a Belgian Malinois.

The Belgian Malinois is a large dog, with males weighing between 55 and 80 pounds and females between 40 and 60 pounds. They have an agile, athletic and square frame with a long muzzle, erect ears and an intelligent face.

The breed's coat is short and hard with a thick undercoat. Their coat is designed to withstand harsh weather. Their coat is slightly longer at the tail, around their necks and on their back legs. The dog has a black mask on their face accompanied by black ears. The rest of the coat is either fawn, fawn sable, red, red sable or mahogany. The Belgian Malinois requires minimal grooming. They should be brushed once a week and more during the two periods a year when they shed. Baths are only necessary if they've gotten dirty from play or work. 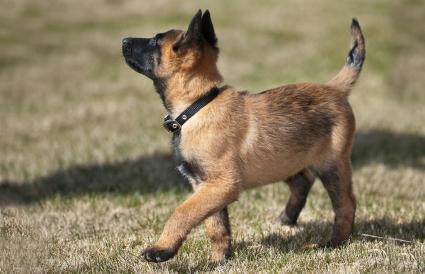 The Belgian Malinois is a fiercely intelligent and motivated dog and they are excessively loyal to their people. The downside to this breed trait is their need to be given a "job" with mental and physical enrichment appropriate to their energy needs daily. These dogs can quickly become destructive and difficult to handle in a home that cannot accommodate their basic needs. In some cases this can appear as aggression, particularly if the dog has not learned bite inhibition as a puppy. A nickname of the breed by its owners is the "malinator" for their tendency to bite and hold, which makes them perfect for police work but can be a problem in a regular home where this behavior hasn't been managed and channeled properly. They also need to be properly socialized from the start as puppies to make sure they don't become fearful of strangers and their protective instincts should be managed.

To keep a Belgian Malinois physically fit and to prevent behavior problems, an owner needs to commit to daily exercise with their dog. This means that a simple walk around the block twice a day will not be sufficient. They're a great fit for a jogger or runner, or someone that loves outdoor activities like hiking. They will not do well just being placed in a fenced yard to exercise themselves, and these dogs have phenomenal jumping skills so don't expect your six-foot fence to contain a bored Malinois intent on finding something to do.

The Malinois is actually an easy dog to train because of their intelligence and focus on people. Like most herding dogs, he has been bred to work with humans and this makes training flow smoothly, provided you have good training skills and reinforcements that the dog is interested in. Belgian Malinois dogs are popular in obedience competitions, dog agility and other dog sports because of their high trainability and athleticism. It's also why they're so popular in search and rescue and military work. 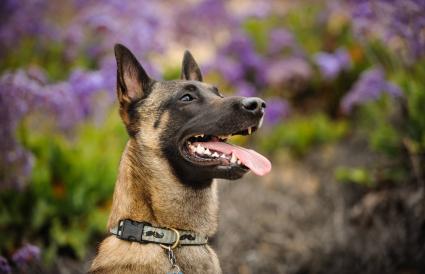 Is the Belgian Malinois a Family Dog?

A Belgian Malinois can be a good family dog if raised with children and properly socialized and trained from an early age. This scenario also requires a home that will provide him with all the daily exercise he needs as well as mental enrichment like training. If you have very young children, like most herding breeds the Belgian Malinois may be a bad choice as they will herd and nip at toddlers and small kids. They also are not the best choice for a home with too much activity and competing demands to properly care and manage this type of dog. They also may not do well in a home with other dogs or pets, as they have a strong prey drive.

The Belgian Malinois has a lifespan of about 10 to 12 years. They are a hardy breed with a few known common health conditions. 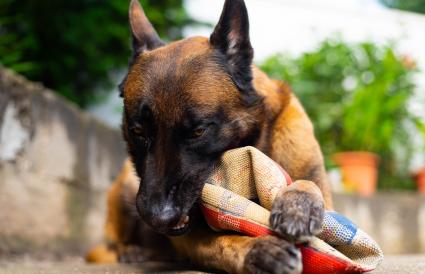 Difference Between a Belgian Malinois and German Shepherd

The Belgian Malinois and German Shepherd are often mistaken for each other. Both are herding dogs developed in Europe and are popular as working dogs with the police and military. Though they are very similar, there are clear differences between the two breeds:

Where Can You Get a Belgian Malinois?

If you feel you have the right home for a Belgian Malinois, you can start your search through the breeder directory on the American Belgian Malinois Club website. Because these dogs can be a handful, it's critical to research your breeder well and find one producing dogs with sound temperaments and health clearances. A puppy will run from about $1,500 to $2,000 although dogs from particular lines can cost much more.

If you prefer to rescue, the first place to look is the American Belgian Malinois Rescue Inc. website. The group lists dogs available for adoption all over the United States. Be prepared for a thorough adoption and screening process, as volunteers will want to ensure these dogs go into homes that are equipped to handle their behavioral needs. Many of these dogs lose their homes because they were popular in the news and purchased without any research and through no fault of their own, were incompatible with their owners' lifestyles. A good rescue group will want to make sure they are going to a forever home that understands what it means to care for a Malinois. In addition to the ABMR site, you can also search Petfinder and Adopt-a-Pet to see if local shelters or rescues near you have any Belgian Malinois dogs.

Is the Belgian Malinois the Right Dog For You?

The Belgian Malinois is a beautiful, confident and stalwart dog that any dog lover would admire. However, as wonderful as they are, they are not the dog for everyone. If you're thinking about getting a Malinois, take the time to talk to some other owners and breeders about what daily life will be like. It's in your and the dog's best interest to make sure your home and lifestyle is suitable for this courageous and loyal canine.