The Alaskan Malamute is a gorgeous dog that is sometimes thought of as part wolf due to its resemblance to the wild canines and its large size. In fact this big dog, intimidating dog can be a large, fluffy teddy bear with an amiable personality.

Alaskan Malamutes are believed to have come into North America with Inuit tribes about 4,000 years ago, making them one of the oldest dog existing breeds. While they have a wolfish appearance, they are not wolves or wolf-dog hybrids though the breed may have developed in the beginning with some hybrids in their bloodline. Their primary purpose was hauling heavy supplies and helping their owners hunt seals.

There are many interesting facts about this long-standing breed: 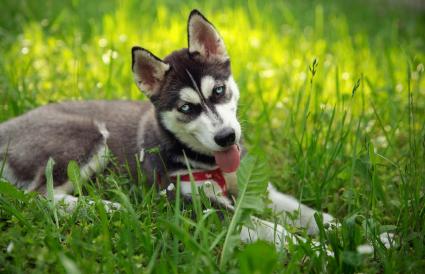 Like other spitz breeds, Alaskan Malamutes have the characteristic plumed tail and a compact, sturdy frame. They are powerful dogs that are clearly built for activities requiring strength and endurance. They have broad skulls, small triangular and erect ears and a long snout. They average size is 25 inches high and 85 pounds for males and 23 inches high and 75 pounds for females.

Difference Between an Alaskan Malamute and a Siberian Husky

Malamutes and Huskies are often mistaken for each although these are two distinct breeds though they share many traits in common. The Malamute tends to be larger and stockier compared to the leaner and agile Husky. Their differences are based on their original breeding purpose. Malamutes were designed to pull heavy loads at a slow, steady pace while Huskies were bred to pull lighter sleds as fast as possible. 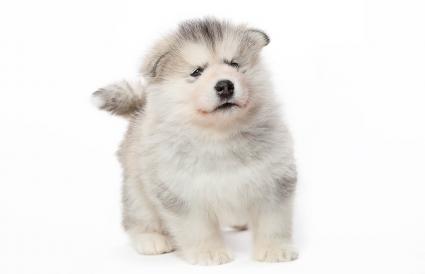 The coat ranges from short to medium length with a coarse, heavy top coat and a dense, wooly undercoat. Their coat is designed for extreme cold temperatures and you can expect these dogs to blow their coats during the warmer months. Their coat also makes them less comfortable in hotter climates. They are definitely a high shedding breed so they're not a good choice if you dislike cleaning up dog hair everywhere. Coat colors are a mix of white and gray, black, sable or red, or solid white. They require a bath every one to six weeks and weekly brushings as matting can occur without regular grooming.

Alaskan Malamutes are known for being outgoing, friendly dogs with a puppy-like demeanor. They enjoy playing and are a good pet to have with children, although older children are better suited because of their size and strength. They can have a tendency to have a high prey drive around small animals and may not do well with cats, though some can live with them if raised around felines. They also can be aggressive to other dogs and have been involved in some incidents with aggression to people, though this can often be attributed to poor socialization and care rather than a general trait of the breed. Malamutes are also known for enjoying a good howl and can be "talkative."

This is definitely not a good choice for a couch potato. Malamutes need a lot of exercise and are high energy dogs. They can be destructive in the home if they're bored and under stimulated. They can excel at any type of athletic activity like jogging, hiking, skijoring and dog sports like agility and weight pull. They also love snow and tolerate the cold very well. You may hear Malamute owners complain about how hard it is to get them to come in from frolicking in the snow on an icy winter day.

Malamutes are known for a keen intelligence and an independent nature which may be more difficult for a first time owner to handle. Positive reinforcement training is a must as these dogs need to work in cooperation with you to learn to the best of their ability. They also should be socialized and enrolled in a puppy class as soon as possible so they don't grow into a large, uncontrollable adult.

The Malamute has a lifespan of approximately 10 to 14 years. They have a few medical issues endemic to the breed. 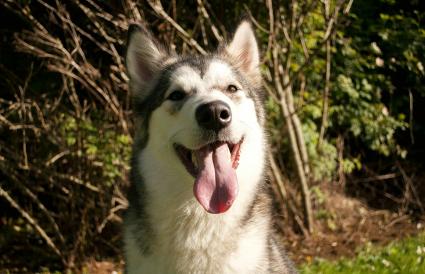 Where Can You Get an Alaskan Malamute?

If you're looking for an Alaskan Malamute puppy, a good place to start is the website of the Alaska Malamute Club of America. They have a breeder directory on their site which is available for download as an Excel file, as well as helpful tips on how to find responsible breeders with quality dogs. The AKC PuppyFinder page is also has a breeder search. Expect to pay around $900 to $1,000 although higher end show dogs from champion lines can be as high as $6,500.

You may see some breeders advertising "Giant Alaskan Malamutes" which is not a recognized breed. These dogs are bred to be larger than the standard for the breed and come be as large as 190 pounds and 35 inches high. This can be problematic for dogs that already suffer from joint issues like hip dysplasia, as well as other health problems exacerbated by poor breeding and their over-large size.

If you would prefer a rescued dog, the breeder list on the AMCA site lists breeders who are involved in rescuing the breed. You can also contact these breed specific Malamute rescues:

Is the Alaskan Malamute the Right Dog For You?

If you are an active person who wants a high energy, intelligent companion who loves cold climates, the Alaskan Malamute is an excellent choice. They're not the best breed for apartments, sedentary lifestyles, homes with small children and pets, or for people who are not keen on dealing with lots of dog hair. Training and socialization is also a must so you should be willing to put in the time to be a responsible Malamute owner before bringing one home.