White dog poo doesn't always indicate an immediate problem, but if you notice your pet's stools are far lighter in color than normal, it's worth checking into because these animals don't usually have white poop. Depending on the cause, you may need to make some changes to ensure your pet's health.

Reasons a Dog Has White Poop

There's more than one reason dog poop is white, and a pile laying in the yard and baking in the sun tends to turn white as it dries and breaks down. However, white dog poo can also be caused by a diet with too much calcium or ingesting items that aren't edible, such as a roll of paper towels. Medical conditions involving the pancreas, liver or gallbladder can also lead to white or grayish-colored feces. Mold on stools left in the yard too long can also give your dog's poop a white coloration.

Diet High in Calcium and Other Minerals

According to an article published by Dr. Karen Becker, dogs that eat foods which are high in minerals produce stools that turn light within 24 hours and break down quicker than brown stools. If a dog's diet contains too much calcium or bones, freshly passed stools are often white and have a chalky texture. This is sometimes the case with dogs fed a raw diet.

Too much calcium in the diet can also lead to chronic constipation. Chronic constipation left untreated can develop into obstipation, which causes your dog to be unable to defecate. If your pet has white stools, you can try:

You should also discuss your dog's constipation with your vet to make your dog more comfortable and to avoid obstipation. 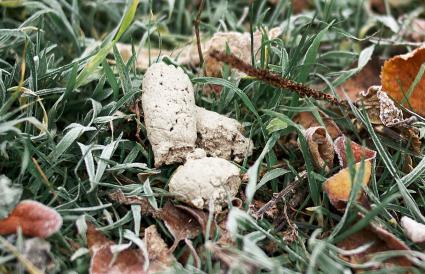 In addition to canned pumpkin and coconut oil, some other remedies for constipation you can try are:

If home remedies do not solve the problem, you veterinarian prescribe laxatives for dogs. The most commonly prescribed laxatives are Laxatone, Lactulose, and Colace.

While there are some laxatives made for humans that can be safe for dogs, do not give your dogs anything not made specifically for dogs without discussing with your veterinarian.

Dogs are notorious for eating things they shouldn't. Inappropriate items like paper products, when consumed in large amounts, can lighten the color of your dog's stools and may even make them appear gray or white.

To combat this issue, try to limit your pet's access to anything he likes to eat other than his regular diet. For example, keep the bathroom door closed so he can't reach the tissue roll and keep boxes of tissue on a shelf.

Eating inappropriate items can be a random issue caused by curiosity or boredom, but if it's an ongoing problem, the dog could have a condition known as pica. In a case like this, it's best to consult a veterinarian who will test your pet for underlying conditions that cause pica and treat your dog either with medication, therapy or a combination of both. 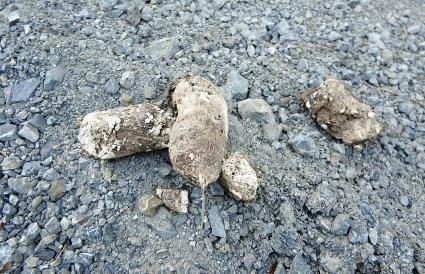 Gray or clay-colored stools are also a significant departure from normal brown stools and may be so light they appear almost white. According to Vet Street, light gray stools may indicate a problem with the pancreas, liver or gallbladder. For example:

You may notice that your dog's poop has a white, fuzzy substance on it. This is actually mold that grows on feces if it's been outside too long, especially in damp, humid weather. If you're noticing this often, step up your regular poop scooping schedule to avoid it.

Pay Attention to Your Pet's Stools

Your dog's stools can tell you a lot about his health. If they're brown and well formed, there's usually nothing to worry about. If your dog's poop is white or gray, it's time to do a little investigating. Collect a sample in a sealable plastic bag and take it to your vet for an examination. You just might catch a health problem before it becomes a serious issue.