If your dog is choking, you'll need to get him to a veterinarian ASAP. However, you may find yourself in a situation where you have to act fast before you can reach a vet.

Dogs that are choking will display some obvious choking behaviors including:

If your dog is choking but still breathing, he will eventually become unconscious if he continues unaided. While these signs indicate a dog may be choking, they also can be symptoms of other problems. Barton C. Huber, DVM, from Animal Medical Center of Corona, says, "In my 31 years of doing this, I have rarely seen a dog that truly has something stuck in its throat. Most of the time it ends up being kennel cough (or some other infection) or a primary heart or lung problem." Regardless, if you see your dog displaying any of these symptoms, Dr. Huber says, "Bottom line - get the dog to a vet ASAP!"

What to Do to Save a Choking Dog

Dr. Huber says if your dog needs help immediately, the first thing to do is look to see "if the obstruction is visible." 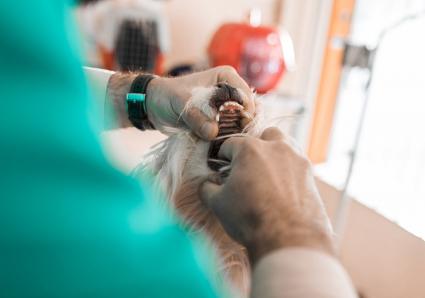 If you can't see an obstruction when you open your dog's mouth, you can try the canine version of the Heimlich Maneuver. The steps differ based on the size of your dog. You will also need to adjust your position based on the type of dog. Says Dr. Huber, "Different body shapes have different techniques (English Bulldog versus Greyhound) so there is no 'universal' technique." He says in general, "The idea is to create enough pressure in the body to forcefully blow out whatever is stuck in the dog's airway."

The Heimlich and Small Dogs

To start, you will need to be able to pick your dog up.

Place a Choking Dog on Its Side

For small dogs that are still choking after the initial step, as well as for medium and large size dogs, lay the dog down on its side on the ground. It needs to be a hard surface so avoid laying him on a bed or pillow.

Another method for medium to larger dogs can be done with the dog standing up, assuming your dog is still able to.

Remember that after you try the Heimlich maneuver, you will need to bring your dog to the veterinarian as soon as possible, even if the dog is no longer choking.

Knowing basic canine first aid, including how to do the Heimlich maneuver on a dog, can someday save your canine friend's life. If you have a dog that is prone to swallowing objects, make sure you "puppy proof" your house and remove access to anything dangerous such as small toys, plastic items, and even certain dog chews such as rawhides.

0
Comments
© 2006-2020 LoveToKnow, Corp., except where otherwise noted. All Rights Reserved.
Resources, Advice & Tips for Covid-19
Read More
How to Save a Choking Dog