Lupus in dogs is an autoimmune disease that can occur in two different forms. When the disease occurs, the immune system forms structures called antigen-antibody complexes which can lodge in the body's organs and cause additional symptoms. Lupus can develop at any point in a dog's life and has a variety of symptoms that can make it a difficult condition to diagnose.

Two Forms of Lupus in Dogs

The two main forms of canine lupus are discoid lupus and systemic lupus. Both can cause damage to various organs and can be fatal without treatment.

According to VetStreet.com, the most common type of canine lupus is discoid lupus erythematosus (DLE). Fortunately, this is the less serious form of the disease and is not known to progress to the systemic form. Collies, Shetland sheepdogs, German shepherds, and Huskies develop DLE more often than other breeds. It can occur at any age.

According to Wendy C. Brooks, DVM, DABVP, the symptoms of DLE are confined to the skin, and almost always involve the top of the nose, an area known as the nasal planum. The first signs that something is wrong may include hair loss or loss of pigment in that area. As the condition progresses, you may see ulcerated sores, crusting, or scabs. The nose may bleed easily if any of the sores are disturbed. A few dogs may develop skin problems in other areas, such as the eyelids, lips and mouth, ears, or footpads.

There are several conditions that can mimic DLE, so it is important to have your dog evaluated by a veterinarian if you suspect this disease. Other causes of sores on the nasal area could include sunburn, hyperkeratosis, cancers, or other forms of autoimmune disease. A biopsy is required to determine if your dog does have DLE. This means that your veterinarian will need to remove a small piece of tissue from the affected area and will send that to a laboratory for evaluation. Even though the procedure is brief, your dog needs to be under anesthesia or heavily sedated.

Treatment for DLE can sometimes be accomplished with topical medications. These could include a corticosteroid cream or a newer drug called tacrolimus. For a more severe case of DLE, your dog may need oral medications that could include prednisone, vitamin E, a combination of tetracycline and niacinamide, or even a more powerful drug called azathioprine. It can also be helpful to avoid excessive sun exposure, which can worsen your dog's condition. If this cannot be avoided, you can apply a pet-safe sunscreen such as Epi-Pet sunscreen.

Systemic lupus erythematosus (SLE) has been called the "great imitator" because this disease has such a wide variety of symptoms that it is not usually the first condition that your veterinarian will suspect. Often, the symptoms can be so varied that other diseases will need to be ruled out.

Collies and Shetland sheepdogs are among the dog breeds with the highest risk of developing SLE. Slightly more female dogs are affected than males. There is not a definitive answer regarding why dogs get lupus. In a few cases, a hereditary component has been found, but it is rare for this to be documented except for cases like a colony of dogs reported in an article called Systemic Lupus Erythematosus in a Colony of Dogs in the January 1988 issue of The American Journal of Veterinary Research. For most dogs afflicted with SLE, there is no identifiable cause, although certain infectious diseases and environmental triggers may play a role.

Environmental triggers can include acute stress, medication, viral infections and long-term exposure to sunlight. Lupus can occur suddenly, while in other dogs it can present as a more chronic illness with a waxing and waning course.

Systemic canine lupus can affect nearly any part of the body, so the symptoms can vary greatly. According to W.H. Miller, Jr., VMD, DACVD, the most common organs affected are the skin, joints, and kidneys. Symptoms of skin involvement may appear similar to those seen in DLE, with sores and ulcers on the nose, ears, footpads, or more generalized over the body. Dogs with joint inflammation due to lupus will often become suddenly unwilling to stand or walk. If only one or two legs are affected, the dog may walk with a limp. Joints may appear swollen or can feel hot to the touch. For dogs with kidney disease caused by lupus, the symptoms can be more vague and could include:

In a small number of dogs with SLE, the disease can cause additional autoimmune manifestations by triggering an attack on the body's red blood cells or platelets (cells that clot the blood). These are very serious conditions that may require aggressive treatment with blood transfusions. Symptoms of these concurrent syndromes can include:

Other parts of the body can sometimes be affected by SLE. Your dog could experience inflammation in the muscles, chest cavity, heart muscle, brain or spinal cord, or lymph nodes. 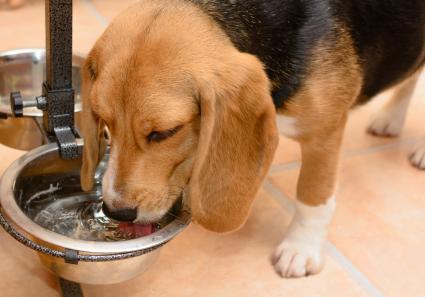 Your veterinarian will not test for lupus initially because the symptoms are so varied. VCA Animal Hospitals lists the wide variety of signs of SLE. There are numerous, more common diseases that have to be ruled out first. According to the Compendium on Continuing Education for Veterinarians, 1999, volume 21 (Canine Systemic Lupus Erythematosus. Part II. Diagnosis and Treatment), there are a variety of tests that will be done first.

Once some of these initial tests are completed, your veterinarian may begin to suspect canine lupus. More specific testing can be done and may include:

Research studies, such as this one in the Journal of the American Veterinary Medical Association, have shown that in order to diagnose SLE, certain criteria need to be met. There is not always a single diagnostic test that will give you a definitive diagnosis for SLE. Your veterinarian will have to evaluate all aspects of your dog's condition to decide whether a diagnosis of SLE can be made.

According to Becky Lundgren, DVM, treatment for the systemic effects of SLE is based on the use of immunosuppressive drugs. Most commonly, prednisone is used. This is a corticosteroid type of medication which is used for many medical conditions. When it is used to treat an autoimmune disease, high doses are needed and come with numerous potential side effects, including:

Azathioprine is another immunosuppressive drug that is often used in combination with prednisone so that the dose of prednisone can be gradually decreased as your dog begins to feel better. Any adjustment to the dosing regimen or treatment for side effects needs to be done with the guidance of your veterinarian. There can also be side effects from stopping prednisone treatment suddenly.

Other Medications and Treatment Options

In a few mild cases of SLE, other medications can be used initially. According to Rod A.W. Rosychuk DVM, DACVIM, these could include fatty acids, tetracycline, and niacinamide, or pentoxifylline. Other medications could be used, depending on your pet's exact symptoms. For very severe cases in which prednisone and azathioprine are not effective, your veterinarian could use drugs such as cyclosporine, levamisole, mycophenolate mofetil, or dapsone. Often, you will need to consult with a veterinary internal medicine specialist if your dog's case of lupus is complicated.

Once your dog begins to feel better, it is important to be diligent with follow-up visits and testing. Blood or urine monitoring may be needed, depending on your pet's exact symptoms and initial test results. According to the University of Prince Edward Island, relapses with canine lupus are common, and the long-term prognosis is always guarded with a systemic autoimmune disease. Future vaccinations are not recommended for dogs with SLE. Moderate exercise can help your dog retain joint flexibility and can reduce pain, but this should be avoided if your dog is suffering from anemia or any bleeding disorders.

An anti-inflammatory diet that is grain-free may be of benefit to dogs suffering from lupus. Supplements, including Vitamin E, Omega 3 and 6, and fish oils have also been found to have some positive side effects.

Luckily Lupus in dogs is not contagious to other dogs or to humans. However, some research has found there may be a risk of humans with SLE transmitting it to their dogs as a zoonotic disease. It is not conclusive if the dogs are getting the disease from their owners, or if common factors in the household and environment are causing the SLE in both the dog and the dog parent.

While it is common to feel some guilt over your dog's illness and to wonder if you could have done anything to prevent it, with DLE and SLE, there are no precautions that can be taken to prevent the disease. With a combination of medications, frequent follow-ups, and a careful attention to your dog's symptoms, your canine companion can live comfortably with lupus for some time to come, although the effects of the disease can shorten your dog's lifespan if not treated in time.