While it's normal for dogs to drink a bit more than usual after exercise or a particularly hot day, drinking excessively can be a sign of several medical problems. It's important to know the signs and symptoms of when your dog is fine and when he needs to get to a veterinarian.

What Causes Excessive Thirst in Dogs

According to veterinarian Dr. Jeff Werber, "There are a lot of different conditions that cause dogs to drink more." He explains that the medical name for excessive drinking is polydipsia or polyuria polydipsia (pu/pd) which indicates excessive urinating and drinking.

Diabetes insipidus is not as prevalent as diabetes mellitus and are actually two separate disorders. This condition causes the body to process water improperly due to metabolic changes. Symptoms include excessive drinking, urinating and urine that appears clear. Dogs may also urinate in the house, even if they're house trained and will have a dull coat. Treatment may involve injections of the hormone vasopressin.

A common condition found in dogs is diabetes mellitus which involves an inability to control the amount of sugar, or glucose, in the dog's blood. Dogs with diabetes mellitus tend to urinate more because the disease causes them to lose more of their normal fluids and this excessive urination leads to increased drinking to compensate. Other symptoms of diabetes mellitus is eating more than normal and weight loss. Treatment involves regular insulin injections and a change in diet.

Hyperadrenocorticism, more commonly known as Cushing's disease, involves an overproduction of cortisol from the body's adrenal glands. A familiar symptom of Cushing's disease is excessive drinking and urinating. You may also see dogs eating more than usual, and a belly that appears to be swollen. Skin issues include hair loss and the skin will look darker and may get infections. Treatment involves medication and possible surgery if there is a tumor involved.

Hypercalcemia occurs when a dog has too much calcium in the blood due to malfunctioning parathyroid glands. Excessive drinking and urinating is one of the signs a dog has become hypercalcemic, as well as poor appetite, lethargy, vomiting, swollen lymph nodes and even coma. Treatment usually involves a period of hospitalization at the veterinary clinic to help regulate your dog's body fluids. Your dog will also be provided with medication to help control the parathyroid glands.

Hypoproteinenmia is a condition where a dog loses protein normally found in their blood and passes it into the stomach and intestines. Dr. Werber explains, "Animals become hypoproteinemic, have low osmotic pressure and lose the fluid portion of the blood into the soft tissues and into the brain. Hypoproteinenmia could lead to some brain swelling and water in the brain". Hypoproteinenmia is usually the result of a disease such as heart disease, lymphatic disorders, parasitic infections, cancer, ulcers and gastrointestinal disease. Signs include excessive thirst, chronic diarrhea, breathing problems, weight loss, vomiting, lethargy and swollen legs. Treatment includes hydrating the dog with IV fluids or plasma and in some cases getting the excess fluid out. It also involves treating the disease that causes hypoproteinemia to occur in the first place.

Some infections can cause a dog to drink more. For example, pyometra which is an infection in the uterus. It occurs in unfixed females due to bacterial infections spurred by hormonal imbalances. Another infection that leads to increased drinking is leptospirosis which is caused by parasitic spirochetes. Dogs with both conditions are treated with IV fluids and antibiotics. In addition dogs with pyometra are given an ovariohysterectomy which involves taking out the ovaries and uterus. 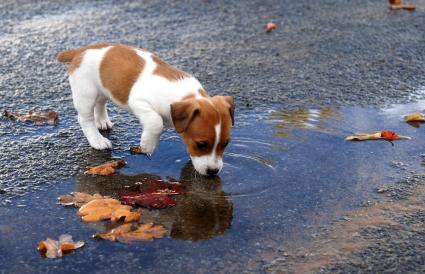 One of the symptoms of liver disease is increased thirst. This is related to the impairment in the liver's function including waste removal in the body. Accompanying symptoms include lethargy, poor appetite, weight loss, swollen belly, vomiting, diarrhea and jaundice. Liver disease is treated by working on the underlying cause and a change in diet.

Kidney disease is often associated with excessive drinking. Dr. Werber explains that, "When the kidneys start to fail they lose the ability to read and adjust the function based on the body's need for fluid. Therefore animals with kidney disease seem to drink a lot and pee a lot because the function of the kidneys is compromised."

Certain medications can make a dog more thirsty. Corticosteroids (prednisone), furosemid, phenobarbital and diuretics are two medications known to make dogs drink more than usual. This excessive drinking should go away once the dog ceases taking the medication.

Over Exertion and Weather

Your dog can drink a bit more water than usual if you've had an energetic play session or a long walk or jog. His normal drinking patterns should resume soon after. Hot weather can also make a dog a bit more thirsty as the heat can make them feel more dehydrated, or they simply want to cool down.

In this condition, dogs may drink more because they simply have a disposition toward it and there's nothing inherently wrong with them. Larger breed dogs and dogs bred to enjoy water may drink more when playing in the water. They may also just drink more than other breeds and it is not a cause for concern.

According to Dr. Werber, "Puppies will often get something called psychogenic polydipsia where they just like to drink." This usually doesn't last very long and can be based on stress or anxiety or boredom. Dr. Werber advises that, "If you have problems with dogs peeing too much you might want to withhold water." In cases of psychogenic polydipsia, rationing your dog's water throughout the day should resolve the problem within 24 hours to a few weeks. Reducing the dog's stress through mental and physical enrichment can also help, as well as discussing possible anti-anxiety medication with your veterinarian.

Dr. Werber says a dog should drink about an ounce of water per pound of body weight per day. Different dogs may drink more or less and it's important to observe their regular habits to develop an idea of their normal intake. Nursing mothers and puppies may also drink a bit more than the normal baseline formula. While he advises clients to ration water to a dog that is drinking excessively, you should never remove a dog's access to water which runs the risk of making the dog dehydrated and can cause underlying conditions to worsen.

Is Excessive Thirst a Night a Medical Problem?

When to Bring Your Dog to a Vet

If you notice pu/pd with your dog, as well as other unusual symptoms, it's time to set up a veterinary appointment to determine the cause. Dr. Werber advises that, "If your dog is overly thirsty, regardless of time of day, I'm concerned." It's important to discuss pu/pd with your veterinarian as it can be a sign of a serious condition that needs immediate medical treatment.

Knowing When Your Dog Is Drinking Too Much

It's helpful to get a good idea of how much water your dog normally drinks each day in order to determine if they're drinking an unusually high amount. While some excessive drinking may be benign, such as when the dog is hot or tired from exercise, many other forms of increased water intake can indicate serious internal disorders. If you believe your dog is suddenly drinking more than usual, take him to a veterinarian right away for a full medical checkup.

0
Comments
© 2006-2020 LoveToKnow, Corp., except where otherwise noted. All Rights Reserved.
Causes of Excessive Thirst in Dogs