A dog that's well-suited for apartment living needs to be reasonably quiet so he doesn't annoy the neighbors, and he shouldn't need an excessive amount of exercise to stay happy and fit. While there isn't a 'perfect' apartment dog, the American Kennel Club recommends toy breeds in general for apartment living. However, if a toy breed isn't what you have in mind, there are a few larger breeds that can also fit well in an apartment lifestyle.

The following small dogs are especially well-suited for living in apartments. Although small dogs naturally tend to bark more, which can be disturbing to some neighbors, their barks typically aren't that loud. Most of these dogs are also light enough to carry easily.

Shih Tzus are bred to be the ultimate companions, and they do very well in apartments. They will bark some, but it generally isn't excessive. They're playful, but they also have calm natures. They will often go lay down somewhere and just observe what's going on around them, but they're happiest when they can cuddle up to their human companions.

Shih Tzus have moderate exercise needs, so a walk around the block once a day usually suffices, but they will need three or four trips outside daily to relieve themselves.

Lovely little Cavaliers are well-suited for apartment life. They are very alert, but they're not excessively noisy unless someone comes knocking on your door.

These dogs take up very little space, and they need moderate exercise to help them burn off excess energy. Plan on several trips outside daily so they can relieve themselves, and make time for a daily walk and some fresh air.

Pekes make wonderful, apartment dogs, especially if your apartment is very small. They get plenty of exercise just walking around the apartment, although they'll enjoy going out for a walk a couple times a week for some fresh air and mental stimulation. They also need about four trips outside daily to relieve themselves.

As for barking, these dogs are on the quiet side, which your neighbors will appreciate. They tend to be rather calm unless they hear something that alarms them. It's also important to know that Pekes are prone to heatstroke, so make sure your apartment has air conditioning for those hot summer months. 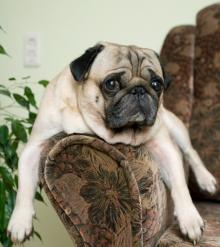 Pugs can do very well in an apartment setting. They are only moderately yappy, and mostly upon greeting their owners when they come home. They are fairly energetic, but they can burn a lot of that off trotting around the apartment.

These dogs need about three to four trips outside daily to relieve themselves, but they can easily walk up and down stairs or be carried if you prefer. They'll benefit from going out for a walk around the block about two to three times a week.

Shiba Inus are very independent dogs, which makes them good candidates for apartment life because they can spend time alone without becoming nuisance barkers.

Shibas do require more exercise than many other small breeds, so plan to take them on daily walks whenever possible. They need about three trips outside daily to relieve themselves, and letting them walk up and down the stairs themselves will help them burn off a little energy as well.

Chins make lovely companions and can be very happy living in an apartment. They are very intelligent and friendly, but they're reserved around strangers and don't bark excessively.

These dogs need moderate exercise, so plan to take them out for walks several times a week. They need to go outside to relieve themselves several times a day, but they can easily handle stairs on their own.

Chihuahuas are certainly the perfect size for apartment living, and they can get all the exercise they need just running around indoors. However, they do benefit from some fresh air. Plan to take them out four to five times a day to relieve themselves, or leave a puppy pad on the floor so they have a place to go while you're away from home.

Chihuahuas are a little more vocal than some other breeds, so plan to provide them with chew toys to keep them busy. You can also leave the TV on low volume to block out some of the noise from outside that might inspire them to bark.

The following dogs can be good choices if you live on the ground floor and have a patio door. This gives easy in-and-out access for you, as well as your dog. These dogs are also better suited for larger apartments due to their size.

Although a Newfoundland might not immediately jump to mind as a good dog for an apartment due to its size, these dogs can make excellent apartment pets under the right circumstances.

Newfies are known for their common sense and gentle natures. They don't bark for amusement, so they won't disturb the neighbors unduly. They can also get by with moderate exercise, so a good walk around the block, plus a couple of breaks to relieve themselves, will get you through most days. They may crowd you if you have a small apartment, but if your apartment is reasonably large, they can be a good fit.

Great Danes are another large breed known to be quite gentle, and they love to be close to their owners. Danes are intelligent, and tend to bark only in greeting or if they sense danger. They train easily as long as you use positive training methods and reward them for good behavior.

These dogs need roughly the same amount of exercise as the Newfoundland, mainly long daily walks. In addition, they'll need to go outside two to three times a day to relieve themselves.

Another not-so-obvious choice for apartment life, French Mastiffs are very easy going. They typically aren't very active, and they often spend many hours per day napping. Although they enjoy a leisurely daily walk, they are not high-energy dogs. They also have an instinct for guarding their people, but they don't bark needlessly.

Like the Pekingese, French Mastiffs are also susceptible to heatstroke, so it's important to have air conditioning in the apartment during the summer.

Choose the Right Breed for You

There are so many variables to apartment living. Some landlords stipulate just how large a dog you may have, and you have to take into consideration for yourself whether you need a small dog you can carry up and down stairs, or if your apartment is on a lower floor where it's more convenient to walk a larger dog in and out. Think carefully about your situation, and imagine how you would manage the dog of your choice. That will give you a good idea of which breed will be the right one for you.