The American Bulldog is one of the fastest growing breeds in the United States, despite not being recognized by many breed registries. This powerful, intelligent and loyal dog can make an excellent companion for the right dog owner.

The American Bulldog's ancestry dates back to 1121 BC and it has existed in the United States since the 17th century. It has also been called the English White, White English, Alabama Bulldog, Southern Bulldog, Old Southern White, American Pit Bulldog, and Bulldog. The current name emerged in the 1980s. The dog was originally bred for bull, bear, and buffalo baiting and as "catch dogs" in the Southeast. Farmers used them for general protection and for catching big animals.

Recognized by the American Bully Kennel Club, the American Bulldog consists of two main types: the Scott and the Johnson, named after the breeders who created them. Each type has its own distinct characteristics: 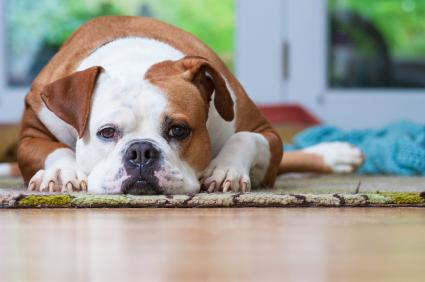 American Bulldogs are not the same as English or French Bulldogs. While all bulldogs have similar origins, they have different characteristics. 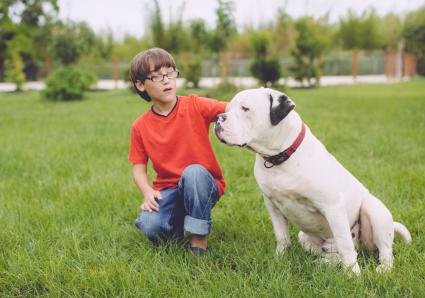 Is an American Bulldog a Pit Bull?

Side by Side Comparison

While American Pit Bull Terriers and American Bulldogs look similar and share many characteristics, they are clearly different dogs when viewed next to each other. In the photo above, the white dog on the right is an American Bulldog with a clearly thicker, heavier framer, larger body and fuller face. The American Pit Bull Terrier on the right is also a muscular dog, but smaller with a more agile build and a less jowly face. 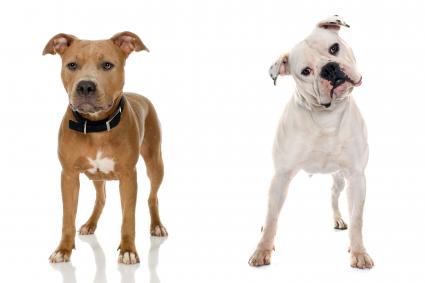 The American Bulldog is a powerful dog with a unique look. Male American Bulldogs can weigh from 66 to 130 pounds and females can weigh between 60 and 90 pounds. Males are anywhere from 20 to 28 inches high while females are in the 20 to 24 inches range. Life expectancy is 10 to 16 years. They tend to be muscular dogs that range from stocky to athletic. The short coat requires minimal grooming aside from regular brushing and a few baths during the year. They do shed quite a bit despite having short hair. American Bulldog coloring is either all white or a mix of white with brindle, fawn, red or tan patches. Many, though not all, American Bulldogs will drool, so be prepared to deal with some slobber. 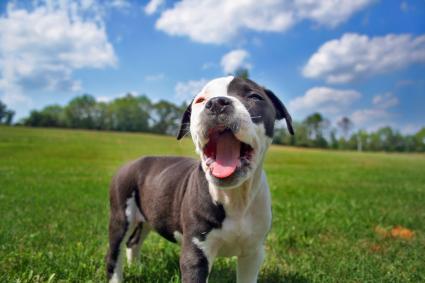 The American Bulldog is a powerful dog that requires training. Early socialization is a must.

American Bulldogs are prone to for a number of possible diseases and health problems.

How to Find American Bulldog Puppies 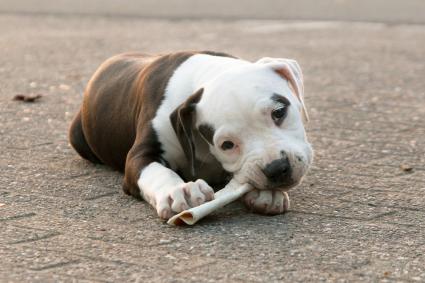 Is This the Breed for You?

The American Bulldog does best with an owner who can meet their needs responsibly. This includes providing active and regular physical activity, ensuring early and continued socialization throughout their life, and dealing with possible aggression. Be aware that some people and government entities may see your dog as a pit bull and subject you to Breed Specific Legislation as well as difficulty getting home insurance. BSL laws vary widely so you should check your location to see if there is a breed ban and if American Bulldogs are included.