Everyone knows about popular dogs like the bouncy Golden Retriever, the friendly Pug or the elegant Standard Poodle. But have you heard of some more unusual and rarer breeds like the Basenji, Azawakh or the Telomian? These dogs are not only not as widespread but they have some truly quirky features such as unusual barks, distinctive fur formations or other unique physical features.

Alpine yodeling has a long-standing tradition in Switzerland and other parts of Europe, but did you know that a hunting dog from central Africa is a yodeler too? The Basenji is sometimes called the Barkless Dog because it indeed does not bark, preferring to make an unusual yodel-like sound called a "barroo" as its primary vocalization. What's more, unlike most other dog breeds, the Basenji only goes into heat once a year. Basenjis are challenging dogs who have a "cat-like" personality and are known to be difficult to house and obedience train.

Have you ever wanted to have a floor mop as a pet? The Puli is easily identified by its signature long coat of corded fur, giving it the appearance of the cords on a mop or even stylish dreadlocks, particularly in the common black-colored variation. The coat on this Hungarian herding dog isn't just for looks either; it helps to keep the pooch waterproof. Like most herding breeds, Pulis are extremely smart and can be a challenging dog to train for the novice owner. They need an active lifestyle and are a good choice for a dog sport enthusiast.

Most dogs have one, reasonably uniform nose with a couple of nostrils. Then, there is a very small subset of double-nosed pointers that are sometimes also called split-nose pointers because their noses are literally split in half. The Catalburun of Turkey is one such example. In fact, "Catal" translates as "fork" and "burun" means "nose." This strange feature is said to provide the gundog with an enhanced sense of smell. The Catalburun is known for being affectionate and gentle around children and adults but can be aggressive to other dogs and to strangers.

One of the strangest-looking pups you'll ever see is the Chinese Crested Dog. It is small and mostly hairless and gets its name from the unique crest of fur flowing on top of its head, in addition to the tufts of fur on its paws and tail. To make this breed even stranger, the Powder Puff variant of the Chinese Crested Dog can have a full coat of fur. Both the Hairless and Powder Puff can even be found in the same litter! Despite their funny appearance, the Chinese Crested is a very loving, affectionate dog that can be seen excelling in many dog sports and therapy dog work.

The Chinese Crested is hardly the only breed of hairless dog with a weird bit of fur on top of its head. The Peruvian Inca Orchid is equally bare on the rest of its body, but it has a spiky mohawk between its ears. In addition to its unique appearance, the Peruvian Inca Orchid can supposedly alleviate stomach pain, asthma and other conditions by "hugging" you, according to the folklore of Peru. Its long history as a pet dates back even before the Inca Empire. These dogs are not a great choice for families with younger children as they are harder to train and socialize.

At first glance, the Norwegian Lundehund looks like any other spitz breed from Scandinavia. Look a little closer and you'll realize that this cute little dog has six, fully functional toes on each foot instead of the usual four that you find on practically all other dogs. The Norwegian Lundehund is also remarkably flexible, being able to tilt its head backwards to touch its back and outstretch its legs to a full 90-degree horizontal angle like human arms. This came in really handy with its original job as a hunter of Puffin birds and their eggs. "Lundehund" literally translates as "puffin dog" in Norwegian. The Lundehund is highly intelligent and sensitive and would do best in a home with older children or adults willing to spend the needed time socializing and training it.

You've got dogs and then you've got cats, and never the twain shall meet, right? The Azawakh from sub-Saharan Africa challenges that notion with its oddly elegant, cat-like gait; it happily prances along with an upright double suspension gallop. Just like its feline counterparts, the Azawakh can be quite timid by nature, but don't expect it to be enticed by catnip or leap up on top of your kitchen cabinets. They are loving dogs who are very loyal but will need an experienced owner who can train and socialize them from puppyhood to deal with their independent nature.

Also known colloquially as the bush dingo, the New Guinea Singing Dog is one of the rarest breeds in the world. It is widely considered a wild dog with wild dog tendencies like an extreme hunt drive and the incessant desire to roam. However, it might also be able to make its way into Juilliard with its ability to belt out Broadway show tunes with the best of them. The New Guinea Singing Dog serenades anyone who will listen with a melodious howl that varies its pitch, hitting some very high notes. They'll even engage in synchronized "singing" in groups like a choir. Don't set your heart on getting one of your own as the New Guinea Singing Dog does not make a good pet.

The Azawakh might have a gait like a feline, but the Telomian of Malaysia can climb circles around even the most agile of cats. These hunting dogs were bred by the indigenous people of Malaysia as a means of controlling vermin like rats and snakes. Because the Orang Asli built their huts on stilts to avoid dangerous wild animals like scorpions and leopards, their pet dogs had to learn how to climb the ladders to get back home. Their dexterity is so good that certain Telomian dogs can even use their paws to open doors like a person. Telomians do not make good family pets as they are not truly domesticated like most canines and they were primarily bred to hunt other animals. 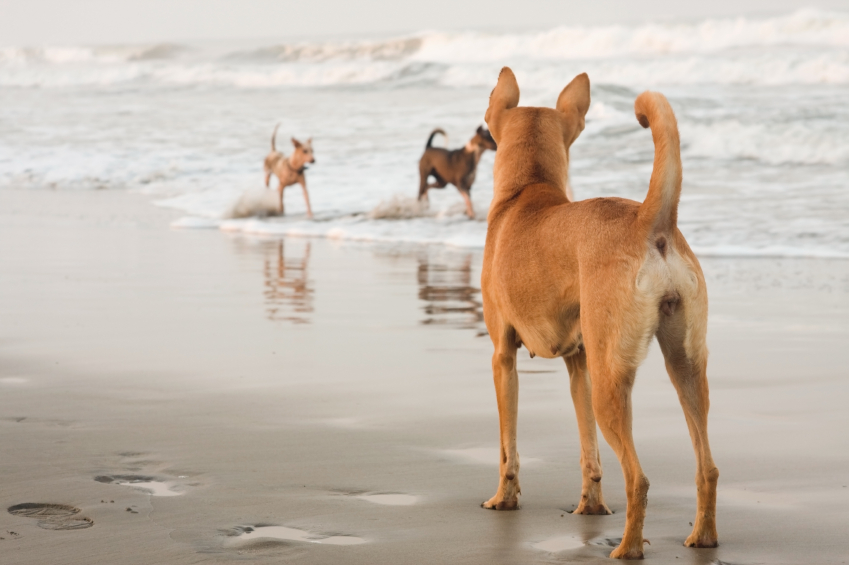