If you've never seen two dogs mating before, you may be unfamiliar with how dogs can become "tied" during the process. You may feel it's necessary to separate the dogs but this can cause more harm than good.

When a male dog is mating with a female, the penis will become congested with blood and swell. The bulbourethral gland, which is located at the base of the penis, will become swollen up to three times its normal size. As it becomes larger, the female's vulva will contract around and squeeze the male's genitalia tightly, thereby keeping the dogs "locked" in place. The dogs will end up being tied end to end as the male will usually move one of his legs over and swing his body around during the process. The dogs will stay tied until the male's penis has discharged his semen and the swelling dissipates. You can expect this entire process to take anywhere from five minutes to 40 minutes.

Should You Separate Dogs That Are Tied?

You should never attempt to break up two dogs that are tied during mating. Doing so could actually lead to physical damage to the female's vulva and the male's genitalia. It's understandable that you may want to break them up because you want to prevent a pregnancy or because you're concerned the female is in pain. It's normal to hear the female "crying" during this process but attempting to disrupt the copulatory tie can hurt her far worse.

What to Do When Dogs Are Tied

If your dogs become tied, the best thing you can do is remain calm and wait until they are done. The dogs will not be able to release from each other until the male is finished ejaculating and the swelling of his genitalia goes back to normal. Getting upset, throwing cold water on them, or yelling or making loud noises can only make one or both dogs more stressed and anxious and this can prolong, rather than shorten, the mating process. If either dog appears stressed, sit with them and hold them gently to keep them from separating until they're ready. Usually the female is the dog in greater discomfort, especially if she's new to mating, so keeping her comfortable and coaxing her to keep still and relaxed is the safest thing to do until the dogs are done.

If you decide to keep a whole male and female dog in your home, you will need to have a plan in place for when the female goes into heat. Some dog owners may feel that having the female wear diapers will prevent the male from mating, but an aroused, determined male isn't likely to be deterred from mating in this way. The best ways to prevent mating are: 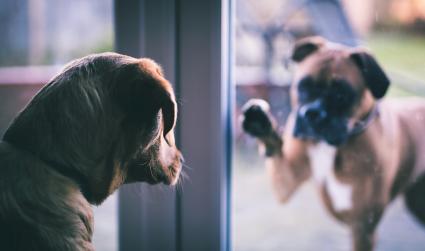 If you would prefer that your dogs do become tied and you want a mating to occur, there's not much you will need to do once the female has reached the point in her heat cycle where she's receptive to the advances of the male. If dog breeding is something you truly want to become involved in, it's best to become a responsible breeder and contact your local kennel club to get advice and education on the optimal age to begin breeding and how to care for the dogs properly before, during and after the mating process, as well as during the delivery of the newborn puppies.

Caring for Dogs During a Copulatory Tie

Experienced dog breeders know that the tie is part of the normal process and will do their best to keep the female calm and comfortable until the dogs separate on their own. Make sure you don't do anything to stress the dogs further or force a separation as this can lead to serious damage to the dogs and very possibly prevent breeding in the future. If you're new to dog breeding, seek out experienced breeders who can provide mentorship and guidance so you can provide the best care for all the dogs involved.

3
Comments
© 2006-2021 LoveToKnow, Corp., except where otherwise noted. All Rights Reserved.
Resources, Advice & Tips for Covid-19
Read More
What to Do When Dogs Are Tied