People new to breeding dogs should understand up front how to keep their dogs healthy and behaviorally sound. Breeding too often can stress a female out and affect the health of the litter.

Number of Litters for Female Dogs

It's possible for a female dog to have a maximum of three litters a year. Female dogs can go into heat around the age of six to 12 months and do not go into menopause. Assuming a dog lives to the average age of 11, a dog could have up to 30 litters. This number is highly unlikely though as senior dogs and dogs that are over bred are more likely to lose litters due to stress and medical problems.

A female dog can go into her first heat before she reaches age one although this varies based on the size of the breed. Small dogs may go into heat as early as six months while large breeds like Great Danes may not have their first heat until they are 18 months to two years old. It's recommended to wait until at least her second or third heat before arranging for a breeding. There are a few reasons to wait for the third heat to begin breeding.

While an older dog can have litters, it's generally accepted practice among responsible breeders to stop breeding a female dog around age five to seven years. After this age, it's more likely that she'll have problems giving birth which can result in an unhealthy litter or no litter at all due to a miscarriage. It also can cause health problems for her because of the strain on her body as she ages.

You will also have problems registering a litter if your dog is too young or too old. The American Kennel Club will not accept registrations from litters produced by dogs over the age of 12 or under eight months old.

Best Interval of Time for Breeding

While you can breed a dog with every heat, this can cause undue stress on the female. This can ultimately lead to less healthy litters and medical problems for the mother. Responsible breeders tend to breed at least every other heat. It is recommended to keep the number of litters for a female dog to three to four total, and a good breeder will spread out the litters over the course of a female's optimal breeding years to keep the mother and her puppies healthy. 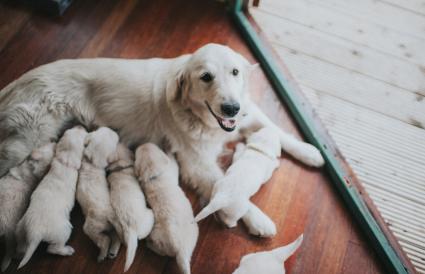 At What Age Can a Male Be Bred?

A male is usually able to breed by six months old, however good breeders will wait til the dog reaches full maturity which can be 15 to 24 months based on the breed's size. This is so they can do recommended health tests to make sure the dog will not pass on any genetic conditions. It also will give you a better idea of the dog's temperament and behavioral soundness. The AKC will not allow breeders to register a litter if the sire is seven months or younger.

How Often Can a Male Be Bred?

Technically there's no limit to how many times a male dog can sire a litter. Responsible breeders wait at least a day between breedings as breeding every day can affect the quality and quantity of the sperm. Some breeders will wait up to six to eight weeks to ensure a healthy and successful breeding.

Average Age to Retire a Male from Stud

While a male can continue to breed throughout old age, the quality of their sperm will decrease and breeding may be more difficult due to health issues. It is recommended that male dogs be retired around seven to eight years of age though this depends on the size of the breed. The AKC will not accept registrations if the sire is older than 12 years.

Breeding a dog involves a serious understanding of genetics, temperament and the care of both dogs involved. Responsible breeder ensure that their dogs are of proper age before breeding. They also keep the number of litters over the lifetime of a female dog to a level that will keep her and her puppies healthy.

0
Comments
© 2006-2021 LoveToKnow, Corp., except where otherwise noted. All Rights Reserved.
Resources, Advice & Tips for Covid-19
Read More
How Many Litters Can a Dog Have?